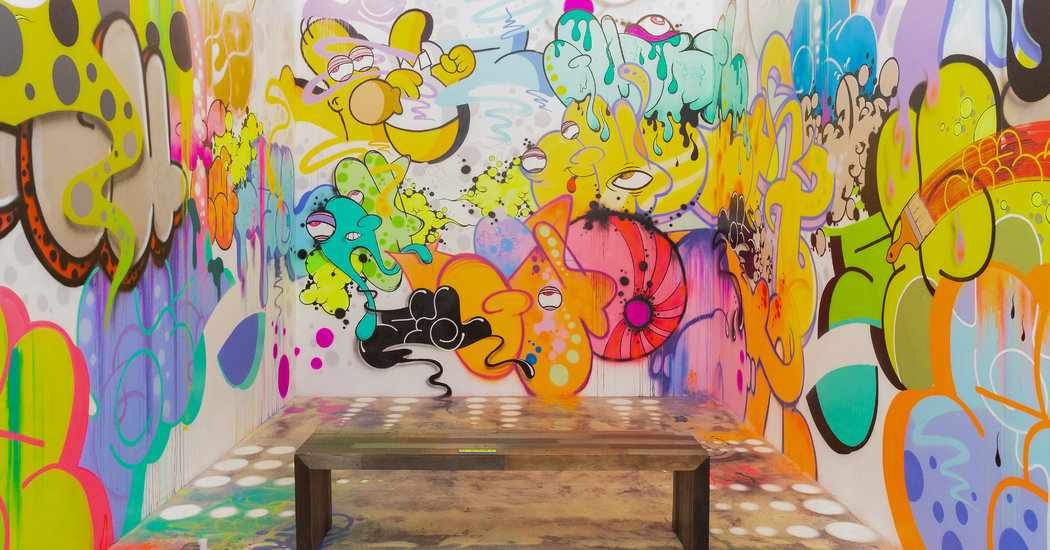 MIAMI — When Alan Ket was a teenager growing up in the Williamsburg section of Brooklyn in the 1980s, he fell hard for the graffiti that still decorated New York City trains. Sometimes he was the one painting, but more often, he was a detective, figuring out the best locations to snap pictures of the art. On weekends, he’d meet up with friends at a one-hour photo shop on Canal St. to trade negatives and prints of the graffiti photos they’d taken that week.

Preservation was the key. “So many beautiful works of art were being destroyed every week,” he said recently. “It was horrifying.”

At the time, he would cut school to spend afternoons at the studio of Henry Chalfant, who had been the crucial documentarian of 1970s train graffiti. Mr. Chalfant had largely stopped photographing trains, and he implored Mr. Ket and his friends to pick up the baton: “He told us it was up to us to document our own movement.”

Mr. Ket (born Alain Maridueña) took that mandate seriously, and built a life on it, culminating in the opening Thursday of the Museum of Graffiti, in the Wynwood section of Miami, the first institution devoted to telling the art form’s history, as well as documenting its stylistic developments with a curator’s eye for detail.

“We have to be our own authorities,” Mr. Ket, who is the museum’s co-founder, said.

Some graffiti artists of the early era made the transition to galleries, others into commercial design. But for a vernacular art that has seeped widely into popular culture, graffiti — especially as represented by the early pioneers — has made few permanent inroads into established museums. Perhaps that owes to its oppositional nature, and perhaps to its evanescence.

Mr. Ket — known simply as Ket — has no patience for that argument. “Is it key to the essence or is it a response to circumstance?” he asked. “I don’t know. I think all the guys that painted wanted everything to last forever.”

Forever is what he hopes to give them, by way of codifying and organizing the art’s history, with a special emphasis on technique. Too often, graffiti is explained primarily through a sociopolitical lens, so the Museum of Graffiti’s inaugural exhibition, “Style Masters: The Birth of the Graffiti Art Movement,” focuses on first principles — letters as artistic building blocks.

The very first wall is a history lesson on the development of letter-writing styles, accompanied by a photo array of train art from 1972-6 to demonstrate how rapidly the form was changing. (Since there was little documentation within the community, many of the photographs come from journalists who were assigned to capture the emerging art form.)

The rest of the 3,200-square-foot space offers a deeply condensed history of the form, from the early moments in which graffiti writers were applying their talents to canvases — on display is the first painting Lady Pink ever did, from her personal collection — up through the ways graffiti has been used on clothing, skateboards, album covers and more.

The graffiti aesthetic may be widespread now, but Mr. Ket’s read is that of a purist. He has a ferocious zeal to protect the legacy of the underrecognized pioneers, especially as street art — which borrows some of graffiti’s immediacy with little of its charm or technique — becomes more widely known and collected, destabilizing the marketplace and public perception.

That intense historical fanaticism — “a desire to regulate, to keep some kind of stability among the chaos, also to keep a standard of quality,” he said — is, in essence, no different from a formal curatorial approach. For this exhibition, there are no nods to Keith Haring or Jean-Michel Basquiat, widely known graffiti-adjacent artists who Mr. Ket believes are not part of the form’s true history. He has even received pushback from PHASE 2, a 1970s pioneer, who believes graffiti is “a derogatory word,” Mr. Ket said.

Ket respects the disagreement, but moved forward anyhow. “I’m sorry that I’m going to write about you and tell your story and talk about your historical relevancy and your value,” he explained. “I have a responsibility bigger than the individual artist.”

A Marriage of Two Rolodexes

Before moving to Miami two years ago, to manage a gallery connected to the Wynwood Walls, a mural park around the corner from the Museum of Graffiti, Mr. Ket had been a graffiti archivist and advocate in various forms. In the 1990s, he published and edited Stress, a hip-hop and graffiti magazine; he consulted for art exhibitions, and he wrote monographs on important artists.

For decades he’d maintained a personal graffiti archive, and had begun to wonder whether it might be better served at an established institution. “But what good is it if you give it to the Smithsonian and it sits in their warehouse for the next 40 years?” Mr. Ket said. “More people see it at my house.” (Graffiti has appeared at the Smithsonian, but sparingly.)

Bringing the museum to fruition became a full-time preoccupation about a year and a half ago. He met his business partner, Allison Freidin, formerly a prosecutor with the state attorney’s office, as she was doing legal advocacy for graffiti writers. She is his sole outside investor — he holds the majority stake — and quit her job to focus on the birth of the museum.

“Ket is really being called on to tell the story properly. I’m also being called on to make sure that we’re treated properly by everybody,” Ms. Freidin said. Mr. Ket is well-connected among graffiti writers, and Ms. Freidin has extensive relationships in Miami’s art and civic communities. “The marriage of those two Rolodexes is what made this possible,” she said.

A Museum of Living History

One afternoon last month, the exhibition was about halfway installed, and Ms. Freidin had just returned from a meeting with the local review board, looking to address concerns about the museum’s sign. Wynwood comes with built-in tourist traffic, thanks to the Wynwood Walls, but it is not especially known for graffiti, at least not anymore.

In the mid-1980s, graffiti writers flocked to the area. Eventually, the more established art scene followed. “They saved this part of town,” Ms. Freidin said. But now, their work, sanctioned or otherwise, competes with corporate-commission murals, and the industrial spaces that gave way to art galleries are now ceding to clothing stores and luxury dessert spots.

Many local graffiti artists view Wynwood with skepticism, Mr. Ket said. They may also view his project as a kind of carpetbagging. To mitigate those concerns, there is a section of the museum given over to Miami’s graffiti history. “We’ve invited everybody back,” he said.

But Mr. Ket is also counting on the way the graffiti community looks after its own, something he experienced firsthand when in 2007, he was arrested and charged with 14 criminal counts, including trespass, criminal mischief and making graffiti. He eventually pleaded guilty to three counts of criminal mischief and paid $ 15,000 in fines and restitution. Shepard Fairey, Jose Parla, Futura and others donated art to sell to pay for his defense.

At the museum, he looked around at the people bringing the space to life and noted that the electrician and various maintenance workers are all graffiti writers. He likened it to El Museo del Barrio in East Harlem, founded in 1969 by Puerto Rican educators, artists, and community activists: “I think of those guys and think, we’re doing that, we have to do it for ourselves.” He’s also brought in a full-time curator, Carlos (Mare 139) Rodriguez, to focus on future exhibitions.

“We want to try to keep adding value not just to history, but to living history,” Mr. Rodriguez said. “ That part of this is the advocacy part, right? How do you create value for the art and the byproducts of this art, and also for the artists?”

Given the museum’s focus on the founding generations, “you’re gonna learn about artists that have no fine art career, like zero,” Mr. Ket said, noting that there might be a ripple effect. “It’s not my intention to affect the marketplace, but if that’s the result, I welcome it.”

The Museum of Graffiti just took on its first corporate sponsors: Levi’s and Charlotte’s Web, a CBD company. Stein Paint Company, a local firm, has offered donations of materials for murals.

The museum will generate three revenue streams — ticket fees, the gift shop, and a gallery that will feature new work from a rotating cast of artists who straddle graffiti and fine art. (The first one is Shoe — Neils Meulman — from Amsterdam, who’s developed a style he calls calligraffiti.) There are also 13 new murals, on the museum exterior as well as on nearby walls.

Last month, the graffiti writer turned fine artist JonOne was painting one across the street from the museum, applying layers of pastel blobs to create a festive abstraction. Mr. Ket first encountered his work in 1986, when JonOne was painting train cars with brushes (in addition to aerosol) — “he was the king of the trains,” Mr. Ket said.

JonOne — John Perello — still uses graffiti lettering as the foundation for his work, even as he pushes it toward increasingly abstract ends.

The museum, he said, had a personal meaning as great as its historical meaning: “We’re trying to make sense of all this madness, everything that went on. We’re doing our own little therapy within ourselves.

“It’s like we’re repossessing our history and our culture,” JonOne added. “Finally giving it its just value.”