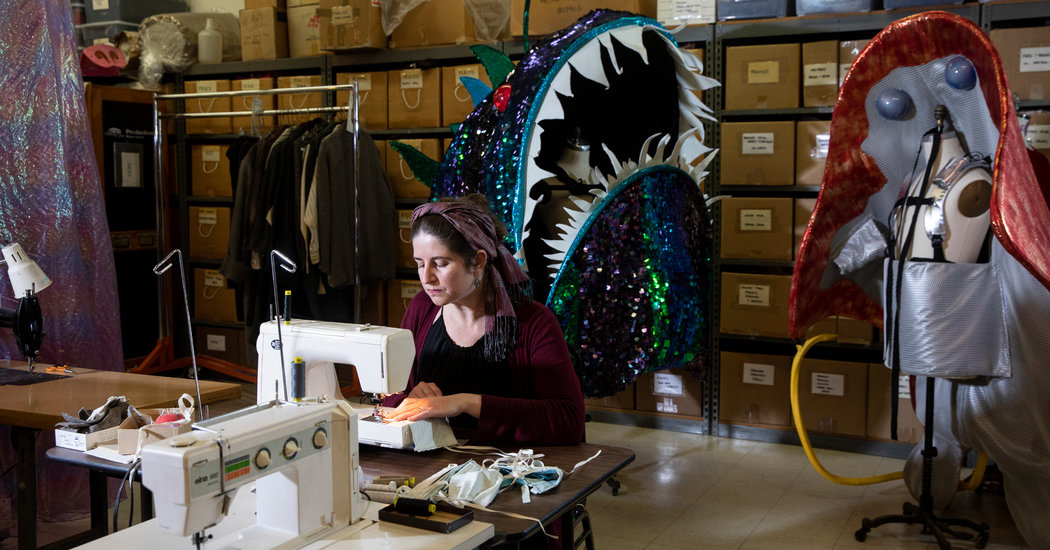 They are scrounging for fabric, cutting it up, stitching it together. They are repurposing drapes, dresses, bra straps, shower curtains, even coffee filters. They are building supply chains, organizing workers, managing distribution networks.

Most of all, they are sewing.

All over the country, homebound Americans are crafting thousands upon thousands of face masks to help shield doctors, nurses and many others from the coronavirus.

They are pulling together to meet an urgent need: Hospitals, overwhelmed by the fast-spreading pandemic, are burning through their supplies of protective gear, in particular masks, at an alarming rate. Doctors and nurses are getting sick and dying.

At the White House’s urging, manufacturing companies are beginning to ramp up their production of masks. But it could be weeks before the new supplies start rolling off the assembly lines.

In the meantime, some of the void is being filled by legions of sewers, called to duty in a matter of days via social media and word of mouth, their skills no longer taken for granted or dismissed as a mere hobby. They are working in living rooms, at kitchen tables and inside shuttered storefronts. They are making masks for America, much as a previous generation manufactured ammunition and tended “victory gardens” during World War II.

“Sewers, we’ve always stepped up and done this thing,” said Denise Voss, the head of the Inland Empire chapter of the American Sewing Guild. “We’re made for this time. We’re happy to stay home and sew. And we all have stashes of fabric.” Her group, with about 130 members in Southern California, is making hundreds of face masks at the request of the Riverside University Health System Medical Center.

Homemade masks are no substitute for the high-grade N95 masks that are the most effective devices to filter out the coronavirus. They’re not even as tough as surgical masks that, until recently, were plentiful in any hospital or doctor’s office.

But the D.I.Y. pieces — generally stitched together with a few layers of cotton, elastic straps and, on ambitious designs, a flexible bridge over the nose — offer at least some protection. “Better than nothing” has become a popular phrase in the tight-knit sewing community. Some doctors are wearing the homemade fabrics over surgical or N95 masks, trying to prolong the coveted masks’ limited life spans. Other masks are being handed out at health clinics and nursing homes.

“It frees up the surgical masks for the people who are the highest risk,” said Dr. Nicole Seminara, a doctor at NYU Langone Health who is volunteering in the coronavirus ward. Dr. Seminara started a social media campaign, Masks4Medicine, to solicit homemade masks from the public.

“Are they effective like an N95? No,” she said. “We’re not claiming they are. If we had all the N95s in the world, it would be wonderful. But there’s a shortage right now.”

Some sewers said they were spurred to action when the Centers for Disease Control and Prevention suggested that hospital workers could tie bandannas around their face as a last-ditch substitute for out-of-stock masks. Sewers designed their homemade masks based on patterns and schematics shared online by health workers and others. They are built to withstand high temperatures (necessary for sterilization) and the violence of industrial laundry machines.

“We want to put masks on everybody,” said Bettina D’Ascoli. She runs a sewing studio in Hastings-on-Hudson, N.Y., that offers sewing classes to children and adults. The shop is closed now, and Ms. D’Ascoli has parked herself on a metal stool at a sturdy wooden worktable inside. Using the studio’s supply of prewashed quilting cotton, she has made about 50 masks so far. They have bright colors and vivid patterns: Blue with red polka dots. Tiny fish. Jelly beans.

“They’re happy masks to brighten up people’s days,” she said.

Ms. D’Ascoli sent a mass email last week urging the local sewers to join her mask-making mission. She immediately started getting phone calls from volunteers, as well as from local doctors and nurses who wanted the gear. “It just got out of control,” she said.

A local architect, Margie Lavender, offered to help organize. She grouped volunteers by their skill level and whether they own a sewing machine; she then helped them get the supplies they needed to get going. She now has 39 people sewing and 10 or so others helping with distribution and other tasks.

The masks are going to doctors around Westchester County, an early epicenter of the coronavirus, but also to FedEx and UPS drivers, grocery store workers, and local police officers, ambulance workers and firefighters.

“They need anything they can get, and that’s happening all over our country,” Ms. Lavender said.

Days earlier, Ms. Hoaglund’s friend Judy Walker had told her that a local health care system had approved a design for home-sewn masks. That prompted Ms. Hoaglund to assemble about 50 mask-making kits to give away. Each contained enough material to make at least 24 masks.

Within minutes of her store’s opening on Sunday afternoon, the kits were gone. Her phone was ringing off the hook, with callers as far away as Texas clamoring for more. Using donated materials, she is working overtime to put together as many more kits as she can.

“It should have never come to this,” Ms. Hoaglund said. “We’re doing what the federal government should be doing.”

Many of the finished masks are going into the Allina Health network of hospitals and clinics in Minnesota, said Helen Strike, who is in charge of Allina’s coronavirus response. She said she worried that the hospital network’s mask supplies could be depleted as the virus spread in Minnesota.

Allina hospital workers in protective gear are collecting the masks at more than a dozen sites where people can drive up and hand them out the window without leaving their cars.

A man from a nearby funeral home recently went into Treadle Yard Goods and dropped off his business card.

“Please, let people know we are being forgotten, because we need masks as well,” Ms. Hoaglund said he had told her.

Nobody knows just how many people have begun making masks over the past week, as awareness grew about the looming crisis facing medical workers. Wade Miquelon, the chief executive of Jo-Ann Stores, an Ohio crafts retailer that is giving away mask-making kits, estimated that the ranks could swell into the hundreds of thousands nationwide.

In Philadelphia, Nan Ides had plenty of fabric. A recent retiree, she had plenty of time, too. She pulled out her sewing machine and started making masks, using materials left over from stitching baby clothes and a floral pattern — purple, green, black and white — from a summer dress that she had never managed to finish.

She saw online that some people were inserting coffee filters to add a little extra protection. Others were bending pipe cleaners or paper clips to make a bridge over wearers’ noses. Ms. Ides kept hers simple. To make sure people would be able to breathe through the fabric, she tested one on a walk around her neighborhood.

“They’re like a double or triple bandanna over your face,” she said.

She delivered a batch, most of them made of the same material as her dress, to Children’s Hospital of Philadelphia.

A group of medical workers tried them on and smiled.

In Washington Crossing, Pa., Dawn Gehrsitz saw someone on Twitter calling for people to make masks. Ms. Gehrsitz, an industrial engineer, didn’t know how to sew. So she searched her house for old fabrics — plaid drapes, an unused shower curtain — and enlisted her son and his girlfriend to help. Sitting at the dining room table with Jimi Hendrix on the stereo, they used a large paper cutter to slice sheets of fabric into 6-by-9-inch patches.

Ms. Gehrsitz’s neighbor’s daughter is sewing the swatches into masks, which have gone to a number of hospitals, she said.

In Ventura County, Calif., the shortage of protective gear has become so acute that hospital officials are actively seeking homemade masks from the community.

“A lot of our elderly population in particular want to help,” said Amy Towner, who runs the Health Care Foundation for Ventura County, which is working with a group of about 150 volunteer sewers. “In World War II, women were making bullets to protect our country. Now, they are at their sewing machines.”

It’s not just amateurs and the elderly. Crews of professional sewers are lending a hand as well.

A group of costume and set designers for the Minnesota Opera in Minneapolis, which has canceled all performances, is stitching masks out of gowns sent by a local hospital, said Corinna Bakken, the opera’s costume director.

Ms. Bakken said she can currently sew five masks an hour, but she hopes to get that number up to six or eight. “It’s a far cry from a corset or a bodice,” she said. She thinks her team can make about 1,500 masks a week.

Just outside Nashville, Krystal Douglas runs Music City Sewing. The four-year-old company does work for the entertainment industry; Ms. Douglas once made a jacket for Bon Jovi. All of a sudden, performers have stopped touring. “My company lost all our work,” Ms. Douglas said.

She has switched from making costumes to making masks. She can make up to 100 a day; she’s fashioning elastic straps from bras. Her masks have gone to two local hospitals and a memory care center in the Nashville area.