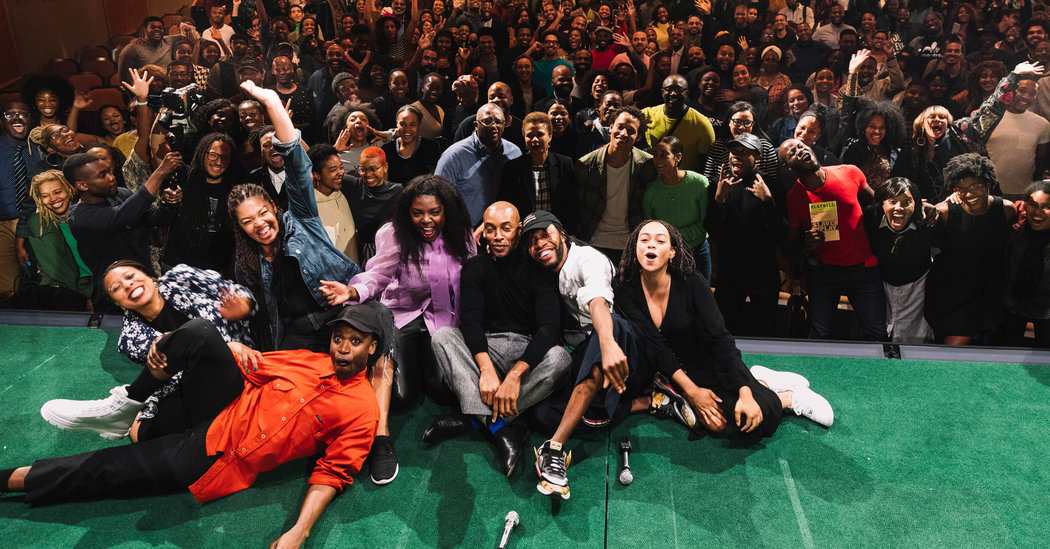 A handful of playwrights, directors, filmmakers and film lovers have created spaces for black audiences to crack jokes and clap back without apology and, afterward, process complex, nuanced race-related issues.

In recent years, there have been many conversations about the importance and impact of positive, multidimensional representation in Hollywood and on Broadway.

Although there are all-black movie audiences, either self-selecting or neighborhood- and film-based, people have made this explicit, presenting the idea that seeing one’s self reflected not only on the silver screen or on a stage, but also in the audience can lead to a deeper validation.

In September, “Slave Play,” a Broadway show, hosted a “Black Out” performance — as labeled by the show’s playwright, Jeremy O. Harris — reserving all 804 seats in the theater for black students, artists, journalists and performers. (On any given night, black theatergoers usually make up 2.9 percent of Broadway audiences, according to the 2018 Broadway League report.)

Chalia La Tour, who plays a therapist named Tea in “Slave Play,” said the performance was a “huge affirming moment” for her as an artist and a person, especially when it came down to subtle expressions, gestures and phrases that didn’t need to be translated.

“To hear the play where every black body onstage is the most understood character on the stage was such an uplifting experience that I know we’re holding on to throughout the entire run,” Ms. La Tour said.

Joaquina Kalukango, who plays Kaneisha in “Slave Play,” echoed her cast mate, and realized the advantage her white actor peers have by performing in front of overwhelmingly white audiences a majority of the time.

The Black Out performance reaffirmed the “cultural and sensory differences” Ms. Kalukango noticed when she began starring in black narrative shows, like “The Color Purple” and “Holla if Ya Hear Me,” for mostly white audiences in commercial theater and on Broadway.

That viewing inspired Maurice Parent, a founder of Front Porch Collective, a theater company in Boston, to organize a #blackoutBOSTON performance for a local production of Tarell Alvin McCraney’s play “Choir Boy.” The play centers on an effeminate gay black boy trying to find his voice at a prestigious prep school.

Mr. Parent compared the “magical night” to a family reunion, or “coming home,” recalling how audience members sang and clapped along to the various gospel songs and spirituals sprinkled throughout the Tony-nominated play.

“It’s very healing, to be in a space where you’re feeling so loved and seen,” he said.

Robert O’Hara, the director of “Slave Play,” said, “We as black people have always had to find a space inside whiteness.”

He said that viewing a performance among an all-black audience “sort of allows you to put off some of the trauma that you carry around every day in the world, just having to live inside a black body, and certainly a black, queer body.”

As for Black Out cinema screenings, Jordan Peele and Universal Pictures held a series of #UsFirst screenings earlier this year for black media professionals and influencers to view Mr. Peele’s second horror movie, “Us.”

And “Queen & Slim,” the Black Lives Matter-inspired love story written by Lena Waithe and directed by Melina Matsoukas, was first screened at historically black colleges and universities during homecoming season.

Blackout Cinema, a Los Angeles meet-up group with more than 2,500 members on meetup.com, hosts events where members watch and then discuss black narrative films of past and present. Lyn Rae, who started the group alongside Kingslee Purcell in 2014, said that the post-film discussions play a critical role in Black Out’s mission to foster community.

Sheri Johnson, a 41-year-old therapist, recently attended a screening of “Harriet,” the new Harriet Tubman biopic starring Cynthia Erivo, traveling from her own neighborhood to see it, on its opening weekend, at a cinema in Baldwin Hills/Crenshaw, a predominantly black neighborhood.

She could have easily watched the film at the closest cinema to her, Ms. Johnson said, but she would have felt uncomfortable in the “very white space.”

Tashia Chambers, 35, a social worker who recently moved to Los Angeles, said she appreciated how that afternoon’s Blackout Cinema discussion covered “a lot of bases,” including intergenerational trauma, mass incarceration and ally-ship.

Lisa Jenkins, a 62-year-old secretary, who was sitting with Ms. Chambers at a food court, said that events like this help people realize they are not alone or isolated, but instead “all in the same boat.”

Jacqueline Stewart, a film scholar who recently became the first black host of Turner Classic Movies and who has explored black spectatorship in her book “Migrating to the Movies: Cinema and Black Urban Modernity,” said that spatial separation of black communities through segregation up to modern-day gentrification has resulted in a drastic decline of cinemas in cities with large black populations.

These include Magic Johnson Theaters and Inner City Entertainment cinemas, in predominantly black neighborhoods where audiences would reflect the residential makeup.

Ms. Rae said: “As black people we can sit around the table and really delve into ‘How far are we from that moment in time? What do we still have to deal with now? How has our community been impacted by us not being made whole with our 40 acres and a mule? What are we going to do about it?’”

What experts say about how to process this experience

The ability to process seeing traumatic experiences displayed in the movies or theater is something Jamaal Scott, a psychologist, uses in Reel Talk, a group cinema therapy curriculum that he developed out of his 2010 postdoctoral thesis.

He works with incarcerated adolescent black males in North Carolina, screening pre-edited clips from films like “The 13th,” “ATL,” “Boyz N The Hood” and “Juice” and hosting discussions on topics including the privatized prison industry, recidivism and father absenteeism.

“If they have peers that are having similar experiences or similar feelings, then that gives them license to also experience those feelings,” Dr. Scott said.

Araya Baker, a therapist and mental health educator who specializes in anti-oppressive frameworks like feminist therapy and liberation psychology, first used cinema therapy while working as a school-based therapist in Philadelphia.

“When a member of a minoritized group can watch a film about their lived experience, without having to censor reactions that would trigger anger or guilt in individuals from the dominant group, that freedom to cast off respectability can be liberating,” he said.

Mr. Baker brought up the negative impact of hyper-awareness of power dynamics and double consciousness, a term coined by W.E.B. DuBois in his 1903 treatise, “Souls of Black Folks,” to describe the constant state of awareness for one’s self and awareness of how that self may be perceived by a white person.

Considered a survival mechanism, this self-scrutiny can “arouse one’s nervous system in the same way a firework might trigger a veteran” and can occur in almost every interaction, Mr. Baker added, including at the cinema and in the theater and particularly during conversations about oppression, identity, power and privilege.

Ultimately, social inclusion can be very protective from a mental health perspective and is associated with better outcomes in terms of depression and anxiety, said Dr. Ruth Shim, the director of cultural psychiatry and an associate professor of psychiatry and behavioral sciences at the University of California, Davis.

Just be certain that inclusivity is not forced — not all black people feel most comfortable in predominantly black settings — and is intersectional, crossing multiple identities and multiple cultural backgrounds, Dr. Shim said.

“The film was just experienced on a different level with that audience,” she said.