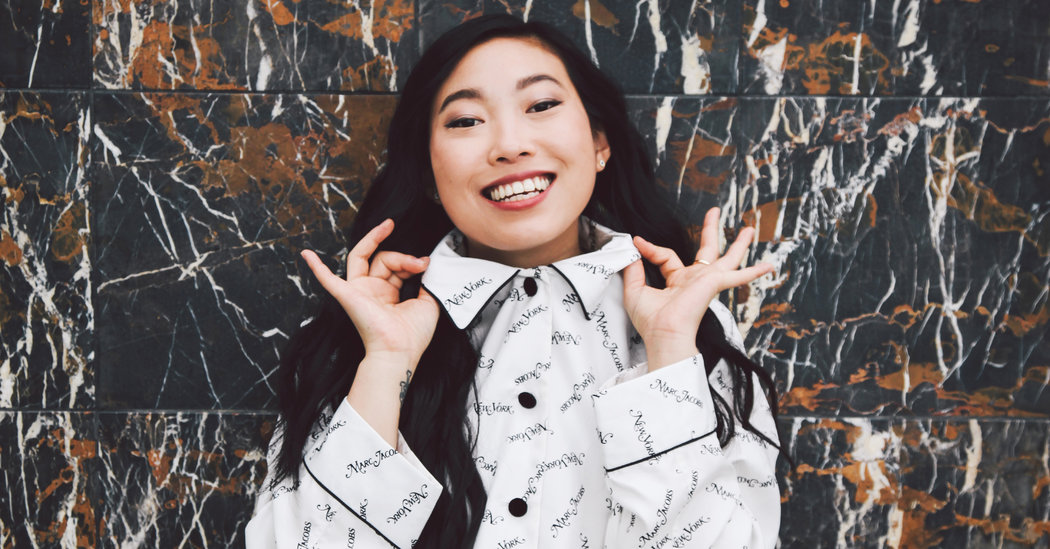 On the set of a new Comedy Central series in September, on a stage built to look like the cluttered bedroom of a young woman figuring out the next steps of her life, the show’s star and creator took a break from filming to introduce herself to visitors. “Hi, I’m Nora,” she said.

To the wider world, Nora Lum is better known as Awkwafina, the one-time viral video creator and rap M.C. turned breakout star of hit films like “Crazy Rich Asians,” “Ocean’s 8” and “Jumanji: The Next Level.”

At the start of January, this 31-year-old performer became the first Asian-American to win best actress at the Golden Globes. She received the award for her lead role in “The Farewell,” the writer-director Lulu Wang’s comedy-drama about a woman (Awkwafina) who travels to China for a gathering with her beloved grandmother (Zhao Shuzhen), whose family has vowed not to tell her that she is dying of cancer.

Despite the expectations of some forecasters, she was not nominated for an Oscar this week, but her other accomplishments would seem to be enough for an actress whose first film role (in “Neighbors 2: Sorority Rising”) was in 2016. Still, Awkwafina has one more project on the way — namely, that TV show.

“Awkwafina Is Nora From Queens” makes its debut Jan. 22. The series, inspired by her real-life upbringing in New York, also stars BD Wong (“Mr. Robot”) and Lori Tan Chinn (“Orange Is the New Black”) as characters based on the father and grandmother of the actress.

With a busy film schedule ahead of her — she has roles in coming movies like Marvel’s “Shang-Chi and the Legend of the Ten Rings” and Disney’s remake of “The Little Mermaid” — Awkwafina said she was as surprised as anyone by her rapid ascent, and determined to follow through on the many commitments she’s made.

Awkwafina spoke earlier this month about the making of her Comedy Central series and why taking the unexpected step to TV is important to her. These are edited excerpts from that conversation.

What do you remember about growing up in Queens?

My memories of Queens are scattered. There’s this family history that I kind of know only from stories, about when my dad was growing up in Whitestone and my great-grandpa owned a Chinese restaurant on Northern Boulevard. My dad still lives in the same building I grew up in. My old neighbors find my dad and they’re like, “I can’t believe she’s that same little girl.” He definitely hams it up with everyone. He’s having a fun time with it.

The development deal that led to “Awkwafina Is Nora From Queens” was announced several years ago. Did the show change during that time?

The pilot changed a lot but there was always this one thread: Nora is where a lot of us find ourselves in our 20s. What’s next? Do you find success and suddenly it fixes everything? No, life is an open-ended question. That gave it room to grow into something that we didn’t imagine at that time. Also, when I first walked into that room I had never acted. I had just gotten cast in “Neighbors [2]” and I was on “Girl Code” but I was never in a movie. It was a gamble on their part.

Have you been secretly training as an actor on the side?

I wish the answer was yes, because I should. Something about my career in the past couple years that is very exciting but also that scares the [expletive] out of me is how fast it seems to have gone with the acting. I remember a period where it was always a question in directors’ minds: “I have not seen her in anything. Why would I hire her?” I have no idea how it’s quite ended up at this point.

Part of being an M.C. is carrying yourself with a certain amount of bravado. Was that a kind of acting?

In the beginning of my music career I was playing shows alone all over the country, venues where no one knew who I was and you’re just heckled to the 15th degree. I had to deal with, literally, tomatoes being thrown. Where do you even get tomatoes? What’s open at midnight that has tomatoes? Out of that you develop a tough skin. You’re not scared to go out there. That helped a lot for sure.

How did you come to cast BD Wong and Lori Tan Chinn on the show?

I will say when I was asked who would be my dream roles for my father and grandma it was BD and Lori, hands down. I grew up on BD. BD was the face that I trusted on TV. We had a conversation about my dad, and he asked me, “What does your dad sound like?” I didn’t know how else to describe it other than someone from New York, so I played BD a video of my dad and BD was like “oh, O.K.” So then when I watched BD’s performance and it’s just like my dad.

I’d been a fan of Lori’s. I remembered her from ’90s movies that I watched and I knew she had this incredible theater background. I’d say half of what Lori does is improv. It’s incredible.

Do you also feel fortunate to have lined up Bowen Yang to play your cousin, just before he took off as a cast member on “Saturday Night Live”?

I met him at a festival, and I thought he was so funny and so quick. We had this Edmund character that was written as a kind of slick Silicon Valley bro. Then we auditioned Bowen and he just changed it. It’s so different but so good — he elevated it. he was filming my show when he got word of [being promoted to the cast of] “S.N.L.” I was screaming but I couldn’t tell anybody. It was great.

“The Farewell” is also a narrative about a woman and her grandmother. Were you trying not to duplicate anything on your show that’s already in the movie?

For me that was never really a worry. They’re both based on real people and there is something similar between them — the real, raw love a granddaughter has for her grandma — but the context is so different. I found a lot of humor in things that really happened to me, living with my grandma and being raised by her. When I was asking for makeup tips, she was like, “I don’t know, just use witch hazel.” Things like that. That woman who watched the O.J. trial, who says really questionable things, things that are more sexual than you want them to be — my grandma is that woman.

Are you seeing more of an appetite among TV and film viewers for Asian-Americans to tell their stories and be the main characters in them?

For sure. I remember when YouTube was called Asian Hollywood. That’s where we released our content. That’s where we were able to get in touch with our fans and it was a direct medium. But this goes beyond Asian-Americans. There’s a generation that demands to see themselves represented in some way in their culture. This generation is going to usher in so much more. This is just the tipping point. There’s not a lot of me right now. There’s going to be more.

You’re having tremendous success in your film career. Is there an argument to be made that you just don’t need a sitcom right now?

Like there’s way too much coming off the Awkwafina channel right now? We need to turn this off for a second?

Like maybe the sitcom is … inconvenient? Maybe you’d rather have more time to focus on the film work?

I definitely see that and it was something that I asked myself. Is my trajectory supposed to go like this? Then I realized that my trajectory doesn’t make any sense. I have no idea if this is literally going to end tomorrow. I’m definitely prepared for end times. I want to do this sitcom for that reason. It was something that was on the radar and that I wanted to finish. It was also like my second project as the lead and one of my first forays into executive producing. So it was learning all those duties. It was forming this amazing group of people and feeling togetherness with them. Those things were really special and I never had the ability to do them before.

If the show is picked up for further seasons, can you see yourself maintaining that same enthusiasm for it? Or is it going to be like, “I’m reading the script for ‘Crazy Rich Asians 3’ in my trailer. Come get me when you need me”?

I’m a firm believer in letting things run their natural course. We’re right on the precipice. I want to see how it does, how people like it. I hope the best for it. I hope it’ll run a nice course. It’s a been long time coming.

Could you foresee a time where you don’t use the stage name Awkwafina anymore and you’re just Nora Lum?

I don’t see it right now. That’s not to say that it’s not a possibility. I created Awkwafina when I was a kid. What she represents to me is more than a persona — in the very beginning, I did see her as the confident one, the side that comes out that gives Nora the panic attacks. The “Drop Dead Fred.” But as I’ve grown older I’ve come to really be grateful for that name and what I’ve seen it written on. To see her name on a chair back or on a call sheet, that means a lot to me. I don’t think that I could shed her right now.