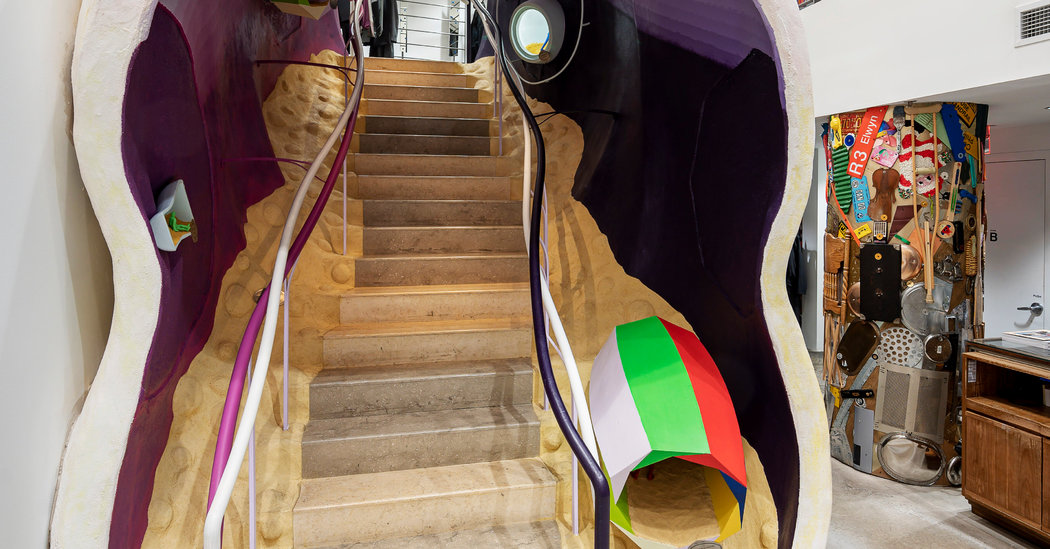 Like many, I have been absorbing the slow death by strangling of Barneys New York online, in articles about failed Hail Mary investments and LOL-worthy Instagram photos of 5-percent-off price tags and clearance posters in the windows that look as if they were last used at a Hobby Lobby.

It has been dispiriting, and also farcical — the butterfingers dismantling of a great New York institution.

Anytime I noticed that a friend had gone for a visit, I sent a message asking for a graveside report; most came back bleak. Recently I went to see for myself — in Beverly Hills, forgive me — and found the air inside stagnant.

The clerks were bored, verging on resentful or resigned. There was an in-house collection of T-shirts with graphics drawn from Kurt Cobain’s journals. A leather Gucci jacket bearing the logo of the Chateau Marmont was about $ 6,000, down from $ 6,700. I dry-heaved just a touch.

The gracelessness of the thing was what got me. But in truth, that gracelessness had been a long time coming. Barneys had been in decline for at least a decade: chaotic merchandising, diluted brand, sophisticated competition.

But Barneys truly became replaceable because it no longer had a monopoly on point of view. Artful luxury became broader as a category, and more diffuse. Barneys, which at its peak operated like an idiosyncratic boutique on a grand scale, found it difficult to remain the ne plus ultra of sly style.

And now it’s gone, or receding. Let’s all meet up at the Barneys pop-up inside Saks Fifth Avenue five years hence, likely to be a tiny but glitzy corner featuring cheap logo tees and mugs and a vintage installation of old Barneys house-line clothing curated by Procell.

IN THE MEANTIME, WHERE TO GO? Over the last few weeks, I visited the heirs apparent, the stores that have taken on the mantle of early Barneys, each homing in on a particular segment of the high-end marketplace, or a particular angle of view: Dover Street Market New York, Totokaelo, Forty Five Ten, the Webster and Kith.

(I skipped long-running competitors like Bergdorf Goodman, Bloomingdale’s and Opening Ceremony; new wide-umbrella competitors like Nordstrom and Neiman Marcus; and avant-garde specialists like Atelier New York and IF.)

What I was craving was a combination of fantasy and authority, a place that could nudge me toward a new self, or a refreshed one. I’m older than I was when Barneys first hypnotized me, but no less susceptible to magic.

And wizardry is what I feel at Dover Street Market, each and every time I go, which is why I don’t go more often. To do so would be hopelessly destabilizing to my bank account and my personal silhouette.

The selection is limited and ambitious, and spaced out enough to encourage serious consideration of Marine Serre face masks, or Margiela Tabi shoes, or a patchwork argyle Molly Goddard sweater.

Every five feet in the store is a new climate zone, thematically distinct but close enough together to ensure you never deny yourself a chance to dream big, or strange. Dover Street is as close as New York has to a Chalmun’s Cantina for fashion misfits. Every employee is wearing at least one item of clothing that looks objectively wrong, until you realize it’s you that’s wrong.

The EKG is slightly less frantic at Totokaelo, but just slightly. Where Dover Street is an avant-garde theme park, Totokaelo exudes a natural calm, as if all the various strands of elegant design were always reconcilable. Stay here long enough and you’ll begin to see what Bode has to say to Issey Miyake, or the ways in which Craig Green and Sacai are in quiet, unlikely conversation.

The default aesthetic is vertical and slim, and the tones are mostly neutral. Overall, the suggestion is that you can be bleeding edge and also modest, an innovator who can easily blend in.

That said, on one of the days I visited recently, Totokaelo also had by far my favorite clientele, and easily the most vibrant: someone who looked like a rogue K-pop star on the lam, a young stylist for rappers, three men (shopping separately) wearing heels.

Even though it has been in New York for four years (and in three locations), Totokaelo still feels as if it’s only for people who have the password.

AS OPPOSED TO FORTY FIVE TEN, which is often so empty as to suggest Prada Marfa. Occupying much of the fifth floor of Hudson Yards, the 16,000-square-foot store is broken into four parts. And yet still, everything feels crammed together. No store in New York does so little with so much.

The spaces are beautiful, the clothes largely chic. And yet each section is a battle of its own. The intense mirroring of the vintage section distracts from the crucial details of the often astonishing clothes, including a pastel layered chiffon Giorgio Sant’Angelo dress.

In the emerging designer and ceramic tchotchke section, the clothes are huddled together so tightly that it’s hard to disentangle the Sandy Liang tech-tulle from the Saks Potts patchwork mink.

Most ostentatious is the women’s designer section, which is thick with fanciful and often astonishingly expensive clothes, from Marni to Monse. It is far more thoughtful than the men’s section, which tends to the anonymously wealthy and only moderately imaginative, apart from a few electric pieces from Jil Sander and By Walid.

When it arrived in March, Forty Five Ten promised to remake the city’s retail landscape; its Dallas locations are imaginative without feeling unapproachable. But this location is hopelessly saddled with the baggage of Hudson Yards, among the least romantic places to shop in all of New York.

Spend too much time in the store and you’re struck by just how ill a fit it is for this development, which tends toward luxury as commodity, not canvas. When you fall for one of the pieces, you look around and feel vulnerable, alone, exposed.

Which is maybe what would happen at the Webster, were it not so narrow. The New York location, which has less flamboyant offerings than the one in Miami, occupies a slender building in SoHo; it’s hard to admire the clothes without being mindful of a wall at your back or side.

It is glitzy and slightly awkward. In its European-ness, it reminds me slightly of 10 Corso Como, which is … still open, I suppose? Tough to say — I haven’t heard that name in years.

The selections are organized by color and texture, not designer, which is smart and occasionally vulgar — pink Jacquemus denim on the same rack as Versace baroque-print track pants — though the options within any one designer are fairly limited. But for all its shortcomings, it is still the highest-end multibrand store in SoHo. On the day I visited, Christian Siriano was perusing the men’s floor with some friends.

From the moment you step in the store, the Webster abuses you with scent. It’s louder than the walls, louder than the furnishings, louder even than the clothes. The dizzying effect feels almost purposeful, a tool to detach you from your good sense.

WHAT THE WEBSTER DOES WITH SMELL, Kith does with sound. On a frigid recent Saturday, after I had to wait in line outside for the customary few minutes, I entered the store and was greeted by Playboi Carti and Baby Bash, thumping at unreasonable levels.

The cold, hard-to-swallow truth is that it is perhaps Kith, more than any of these other stores, that encapsulates the luxury evolution that left Barneys floundering. Dover Street, Totokaelo, Forty Five Ten, the Webster — they draw fundamentally from the same playbook, the same stratosphere of brands, the same ideology. They want to be sacred.

Kith crashes a Porsche Cayenne into that daydream, gleefully. It is a luxe street wear hub, a nightclub in daylight hours. The clothes are geared toward rappers and the rapper-adjacent. The engines that are powering the shift in high-end men’s wear aesthetics are all emanating from here.

Sure, there may be no Louis Vuitton or Balenciaga, but the ideas that are animating the makeovers of those brands are happening on a more germinal level.

And besides, it trademarks its own sort of clout: Kith collaborates widely, the new hallmark of prestige. When I went, there was a mini exhibition of its recent Disney collaboration, both audacious and inexplicable, and also a Kith/Vogue varsity jacket, which may well lead Anna Wintour to fire whoever convinced her of its merit. (The sweatpants are good, though.)

As a shopping experience, it’s never not grim. The store is claustrophobia inducing, and as rowdy as the floor of the New York Stock Exchange. There are intriguing pieces from Mastermind and Ader Error, but it’s a challenge to embrace them more than cursorily. The women’s floor essentially sells only après-spin items that would pair well with black leggings and Air Force 1s.

One inconvenient fact about Barneys is that it attempted, in its last years, to court this market ever so slightly. There was a grudging understanding that luxury was increasingly trickling up, not down. But the market pivoted faster than Barneys could. What was once a pastoral affair is now a scrum.