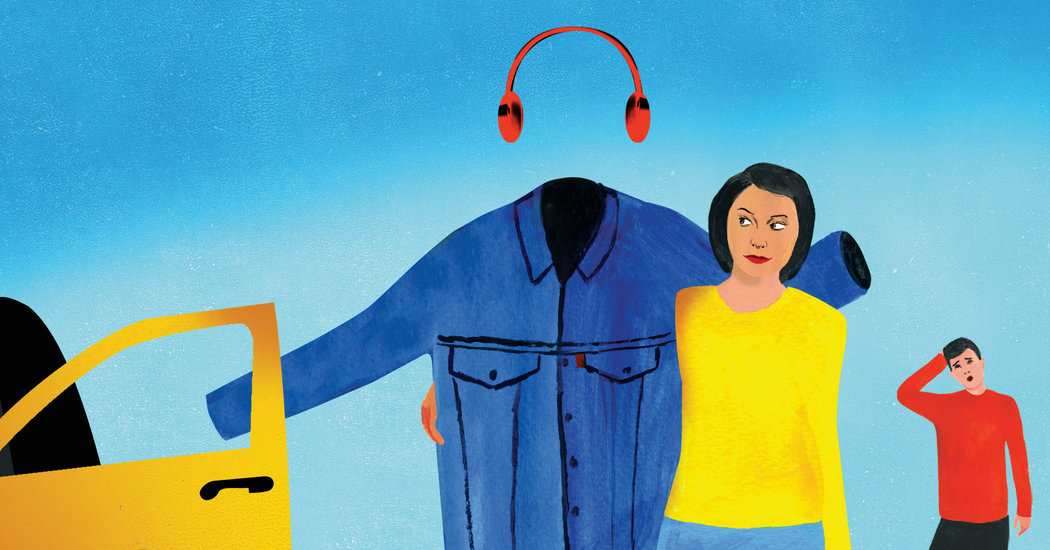 There is absolutely no reason I need a jean jacket to tell me my Uber is arriving, but I’m always amused when it does. Thanks, coat. So considerate.

The new Levi’s Trucker Jacket, made in collaboration with Google, does a lot of unnecessary but delightful things.

It vibrates when one of my chosen iPhone contacts texts me. When I swipe the inside of its cuff, it tells Spotify to skip to the next song. It orders my phone to take group pics remotely. And when it isn’t working, it makes me paw at my sleeve in frustration.

That’s how many new technologies start out: slightly awkward, questionably useful, kind of fun. The jacket’s sleeve is interwoven with touch-sensitive threads, which connect to a tiny rechargeable Bluetooth-enabled device embedded in the cuff.

The threads respond to swipes and taps, allowing users to control a phone. The device also gently vibrates, based on alerts that can be customized through the accompanying app, called Jaquard.

The first Levi’s smart jacket, introduced in 2017, was all business. It cost $ 350 and was aimed at bike commuters. “We made a jacket that was great for biking around during the week,” said Paul Dillinger, the head of product innovation at Levi’s, “but I’m a selfish, greedy designer and I want it to be everyone’s favorite jacket all week.”

The new jacket has a lower price, $ 198, a smaller electronic tag and expanded features like camera control and the ability to save a location on Google Maps. It is meant for younger people, or busy people, or “curious people who explore urban environments,” Mr. Dillinger said. Also, people who go to music festivals.

“There’s something about when you’re at a festival, and Hot Chip is about to play, and all your friends are right there,” he said. “You know that moment of joy when you’re all together? I’d like to facilitate that moment.”

We, as a society, are a ways off from our jean jackets facilitating most elements of that moment, including buying concert tickets, coordinating transportation, determining Hot Chip’s set time or doing the communication necessary to gather friends, Mr. Dillinger conceded.

But that’s the grand vision. He expects Levi’s and Google will add new features to the app over time, he said.

The idea of facilitating real-world connections has been the North Star — or at least primary talking point — of many wearable tech products, going back to the doomed Google Glass. From the TED stage in 2013, Sergey Brin, the Google co-founder, made the case for his company’s face computer by denouncing the way people, including him, stared down at their smartphones.

“You’re standing around and you’re just, like, rubbing this featureless piece of glass,” he said. To many, Mr. Brin’s solution looked simply ridiculous. Its discreet camera felt too invasive. It did not catch on.

A different Google executive, Ivan Poupyrev, took another crack at the problem from the same stage in April of this year. He, too, condemned a world of people glued to their screens.

Wearing a Levi’s jacket, Mr. Poupyrev advanced the slides from his presentation by swiping his sleeve and declared a new solution: things.

“Can things become a way for us to interact with our digital life? Can the world become your interface?” he asked. The key, he conceded, is that wearables need to be something people actually want to wear. It was a clear lesson from the shortcomings of Glass.

That’s where the fashion industry comes in. In addition to Levi’s, Google’s advanced technology and research division has collaborated with Saint Laurent on a black canvas “Cit-E” backpack with a “smart” strap that can control a phone with gestures. The $ 995 bag works with Jaquard, the same Google-built app used by the Levi’s jackets. It went on sale in September.

Mr. Dillinger said he expects more brands to follow Levi’s, with technology specific to the types of users who are drawn to them. The Levi’s jean jacket “connotes a certain lifestyle,” he said — for people who go to clubs, bars, concerts and festivals — “so we’ve developed abilities for that lifestyle.”

I did not wear the jacket to a club, concert or festival in the week I tested it. Some days I completely forgot to use the smart features, inadvertently validating Mr. Poupyrev’s theory that a good jacket was more important than the tech inside it.

Then my sleeve would surprise me with a buzz, reminding me to — what else? — take out my phone.