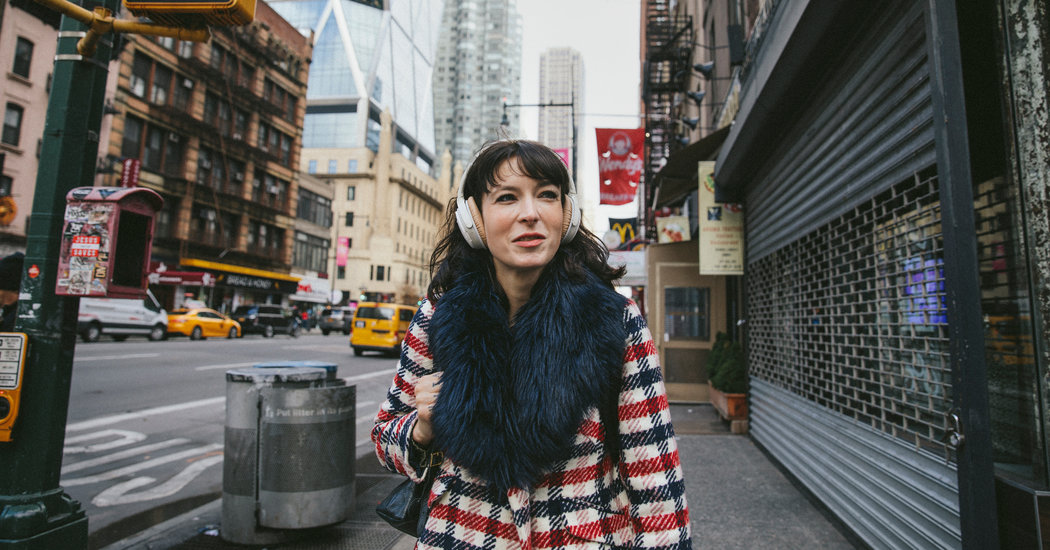 Diablo Cody, the Oscar-winning screenwriter behind “Juno,” “Young Adult” and “Tully,” is a master of the endless hustle. But her latest routine — commuting between Hollywood and Broadway every week — is admittedly gnarly.

While she’s still creating for the screen in sunny Los Angeles, she also wrote the book for “Jagged Little Pill,” the Alanis Morissette musical in previews at the Broadhurst Theater. Cody tracked her cultural diary for The Times, from getting her three sons ready for school on the west coast on Nov. 13 through her rehearsals in Midtown Manhattan for “Jagged Little Pill” on that Friday afternoon.

These are edited excerpts from the conversation.

Mornings are really hectic at my house in Los Angeles because I have to get three kids out the door. So we’re making breakfast, we’re finding socks. I tell Alexa to play yacht rock because it’s really soothing. I can pretend to sit on a little boat with Christopher Cross instead of making peanut butter sandwiches and putting sunscreen on kids that are trying to get away from me.

Then Alexa played “Time Is Endless” by Adrian Gurvitz. I thought I was an expert in the genre, and I was like: “That’s weird. I’ve never heard this song before.” It’s always good to get introduced to something new. Thanks, Alexa.

Everything in L.A. is a pain. There’s no such thing as a short commute, and the vast majority of my music listening happens in the car. Sometimes I’m in a Miley Cyrus mood, sometimes Jackson Browne, sometimes Britney Spears and sometimes psychedelic rock from the ’60s. The kids also have their favorite songs. My 9-year-old is obsessed with Scott Joplin. He’ll ask to hear “The Entertainer,” the “Maple Leaf Rag.” He plays the piano so I think that’s part of it. And my 7- and 4-year-old, they love this guy Parry Gripp. There’s this song called “Pancake Robot” and another called “Yum Yum Breakfast Burrito” — just goofy, goofy music.

Then I’ve got to turn around and come back in the opposite direction to my job at Warner Bros. I have a deal where I develop TV for them. I’m working on a reboot of a familiar property, and I’ve never really done that before so it’s exciting, it’s different. When I’m in L.A., that is what I’m doing 99 percent of the year. This Broadway show is an anomaly.

Is this going to be a boring piece if I’m always in my car? Because, honestly, when I’m in L.A., that’s your life. I was driving to a pitch. I’m not allowed to talk about the show that I was pitching, but we were going to Netflix and Amazon and Apple, and I always listen to “Keep It” because I love that podcast. Louis Virtel is one of my best friends, so I’ll listen to anything of his. Anyone who knows the best supporting actress winner from 1997 is my people.

I’m a phone addict. I’ll scroll through Instagram all day. I love meme accounts like Gary From Teen Mom and goofy astrology accounts. Therapy accounts — where therapists like @the.holistic.psychologist and @lisaoliveratherapy post advice for the day — are my latest addiction. I love looking at pictures of astonishing things that are happening in the natural world — @natgeo, @oceans247 and @passport.ocean — because I don’t get exposed to a whole lot of that in my day-to-day life.

I love Belarus the Cat or any animal that’s old or has one eye. They’re so precious. And I like to know what the youngs are up to. I’m 41 now, so I’ve got to keep in touch with the cool stuff. I have a private account. I don’t hate social media on an intimate level, but I don’t have any interest in having a public presence.

I was home with my 4-year-old, and he was doing things to ruin the mood, like saying random things to Alexa. He was looking at a loaf of bread that was on the kitchen counter, and he said, “Alexa, play bread.” Of course, there’s an actual band called Bread that he could not have known about. Alexa started playing “Make It With You” and “If.” I was not displeased.

I read to my boys every night; that’s part of the ritual. “The Velveteen Rabbit” is a favorite in my house right now with my 4- and 7-year-old. My 9-year-old is an old soul, I’d say, and the typical books that are directed toward his age group don’t really interest him. He likes to hear real, gritty stories, as ridiculous as that sounds. I was trying to find a book for him recently, and I had [Jack Kerouac’s] “On the Road” on my shelf, and I realized I had never actually read it. I was curious about it, so I started reading it to him. Obviously there are certain sentences that I have to skip, but he’s very invested.

At this time of year, I have an obligation to watch a lot of movies because I’m an Academy member. So I watched “The Farewell.” I had heard all the positive buzz, and it really delivered. I love Awkwafina. I thought she was hilarious in “Crazy Rich Asians,” and it was cool to see her show a more dramatic side. She really pulled it off. It was much more emotional than I was imagining, and the ending kind of took me by surprise. I just thought it was a beautiful story that I had never seen before. The stories that are untold are always the most interesting to me.

Sometimes I prefer a red-eye because then you don’t lose an entire day going from work. But this time, I took a daytime flight. I see people who get work done on planes, but I am not one of them. Typically I will nap or, if I’m feeling ambitious, I’ll read a book or a script. I don’t get a lot of writing done on flights. It feels weirdly not private. If I’m working on a screenplay, I’ll sense that someone is curious or can see what I’m writing. I was in a Reddit hole that day. I mean, who doesn’t love to look at pictures of food porn?

When I’m back in L.A., I have the Peloton bike, which is my preferred workout method. But in New York, I don’t have the bike, so I do their mat-work app. I feel like the instructors are my friends, which is maybe a little bit sad, but it motivates me to exercise. I love Denis Morton. He swishes his hair around and shows off his blowout. Why not just go to a yoga class? Hmm, that sounds terrible. You mean like with other human beings in the room? Absolutely not. I don’t know if you can tell, but I have crippling anxiety. I’m a total introvert.

I’m living in Columbus Circle in this furnished apartment in a building with lots of other people who are here for work, so it’s like a strange corporate dorm situation. I walk down to the Theater District and listen to old music on Spotify — the Kinks, the Beatles, the Zombies, the Troggs — ’60s comfort food. The Beach Boys are my favorite band of all time. I might be an encyclopedia of Brian Wilson.

I usually arrive at the theater at noon, the performance is at 8 and I get home around midnight. We’re constantly tweaking “Jagged Little Pill” because we’re in the middle of previews and that’s what this process is for. We’re going to open on Dec. 5, and at that point, the show gets locked. It’s nice knowing that we have this luxury of two more weeks to make sure that every joke is landing and that everyone’s motivation is clear. I’m not a crazy perfectionist, but I don’t get to do this in movies or TV. It’s like a fantasy for a writer.