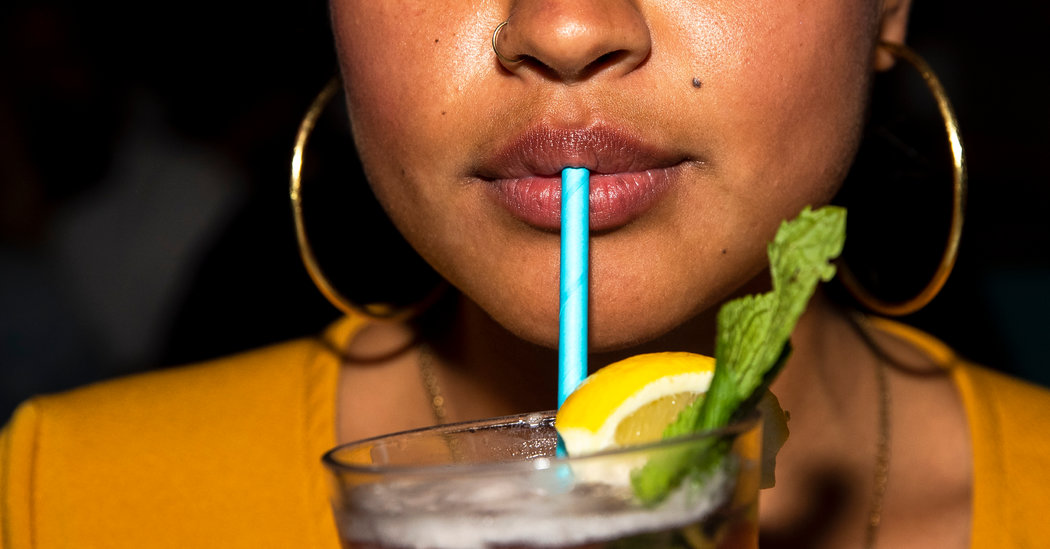 “It was never just about the straw,” said Christine Figgener, 35, who was calling from Texas A&M University, where she is finishing a Ph.D. in marine biology. Her voice got stronger the more she ranted. “The straw was supposed to be a symbol, a poster child. It’s a low-hanging fruit.”

Ms. Figgener studies marine turtles, and in August 2015 she posted a video of one getting a plastic straw removed from its left nostril. The procedure seemed painful, and the turtle kept sneezing adorably. Over 40 million people have seen the clip on YouTube. A public crusade against plastic straws began.

They’re not just harmful to turtles. “Every piece of plastic that is being used and consumed, it sheds tiny chemicals, and they go into your body and into your food,” said Cyrill Gutsch, the founder of Parley for the Oceans, an organization known for mobilizing the fashion and music industries for environmental issues. “If you drive a car, for example, little parts of the tires go into the water and the rain and into your ear. Plastic is now found everywhere on the planet, and no one can protect him or herself from it.”

Which is why recycling plastic isn’t really a good solution, he said.

Bars, coffee shops, airlines and hotels across the country have responded, replacing plastic straws with paper, bamboo, hay, meat, pasta and candy varieties (remember drinking Coca-Cola out of a Twizzler as a kid?)

Tiffany & Company designed a version of the bendy straw it sold in plain silver or gold, in prices ranging from $ 250 to $ 425. Adrian Grenier and Tom Brady are among the celebrities who have taken up the cause.

Straw shaming is a hashtag on twitter as well as something people do to strangers at a bar in real life. There are countless start-ups focused on making reusable, easy-to-carry plastic straw replacements. New York City is gearing up for an official ban, following Seattle and Washington D.C.

“I would be shocked if someone asked for a plastic straw,” said a server at Soho House in the meatpacking district, who didn’t give her name because she isn’t authorized to do interviews. “Everyone knows it’s a taboo thing now.”

But straw alternatives aren’t perfect. One woman died after impaling herself with a metal straw. Metal and paper straws also use energy to produce and result in waste. Die-hards are hoarding plastic straws like incandescent light bulbs before them, using them in the privacy of their homes.

And it’s hard to ignore the fact that even people who have eschewed straws entirely are still using plastic water bottles, shopping bags, coffee cup lids and cutlery in abundance.

Still: “Straws are items that can be easily replaced and left out of our lives,” Mr. Gutsch said.

Brice Jones, 34, an owner of Freehold, a 10,000-square-foot nightspot in the Williamsburg section of Brooklyn, declared boldly that he and his colleagues were “the founders of the strawless movement.” (They were certainly among the earliest New York establishments to adopt it.)

He said representatives from Oceanic Global and the Lonely Whale Foundation, both ecology nonprofits, live in the neighborhood and stopped by one day to lecture him on the evils of plastic straws.

Replacing them was difficult from a business standpoint. Freehold had gone through 1.4 million straws in his first year of business, and each one cost half a cent. At the time the cheapest paper straws (ones that had a custom color and were on the thick side) cost 25 cents, 50 times the price.

Using weaker straws or no straws would cut into Mr. Jones’s profits in other ways too. “When you have a big, plastic straw you can suck a drink down really fast,” he said. “New York hospitality is all about maximizing how much people drink.”

But it also might be a cause that would resonate with his audience. “We do a comedy night, and let me tell you, this is a P.C. crowd,” Mr. Jones said.

He found a company in the United States, Aardvark Paper Straws, that could supply enough straws to keep up with volume.

Mr. Jones used his leverage as a member of the New York City Hospitality Alliance (a group that included Soho House, the Standard and Tao) to talk them into selling them for 2.5 cents each (It was a smart business move. In August, Aardvark was acquired by Hoffmaster Group, after going from making thousands of straws a day in 2016 to millions in 2019, it said.)

Now hundreds of hospitality venues in New York City don’t have a single plastic straw on the premises. Many of them, including Soho House, give customers paper straws automatically.

At other places, like Tanoreen in Bay Ridge, drinks are served strawless or with paper straws, with servers explaining that the establishment is trying to reduce its plastic footprint. Starbucks started a public campaign to inform customers that all locations will be plastic-straw-free by 2020.

Not every establishment can afford to make the switch. “It’s a really hard business environment right now in New York City,” Mr. Jones said. “Maybe the difference between 2.5 cents for a paper straw and a half a cent for a plastic straw determines if you can stay in business or not.”

With some customers complaining about paper straws (the colder the drink, the faster they disintegrate), many bars have turned to quirky alternatives. There are meat straws for Bloody Marys, pretty bamboo straws for Instagram-worthy cocktails, hay straws for thick drinks like milkshakes.

Jordan Bolebruch, 29, who owns a childhood development app and lives in the West Village, ordered a cocktail from Feroce Ristorante in Manhattan’s flower district. She felt her throat getting scratchy and realized her straw was made from pasta.

“I didn’t think twice about telling my waiter my list of 15 allergies including gluten because I wasn’t ordering food,” she said. “I didn’t think my straw would be edible. And the straw was disintegrating into my drink like it’s no one’s business, so it really was like I was eating it.” (In a statement, Feroce management said that it takes its guests’ well-being “incredibly seriously,” that staff is trained to ask about allergies and dietary restrictions when taking food and drink orders, and that the pasta straws, created as a playful approach to sustainability “can easily be substituted for a paper straw, or no straw at all, as our guests are always our first priority,”)

Ms. Bolebruch recovered after popping Benadryl, but she is over the trend. “The straw situation has completely gone overboard,” she said.

Ms. Bolebruch is now rebelling by hoarding plastic straws. Every time she passes a Starbucks she’ll grab a few. “I have about 50 in my apartment,” she said. “I’m not the only one. My friend’s mom has bought out Costco.”

Another person rebelling is President Trump, who has publicly ridiculed straw bans (“we have bigger problems”), and whose campaign, over the summer, started selling 10 branded plastic straws for $ 15 with the tagline “Liberal Paper Straws Don’t Work.”

Aly Walansky, 40, a writer in eco-conscious Park Slope, considers herself a liberal, but bought 600 plastic straws on boxed.com for $ 6. She uses them for her morning coffee, her afternoon Coke Zero, even her evening Shiraz. She brings them with her on airplanes.

“It sucks to drink out of a stirrer,” she wrote in an email. She insisted she is trying to cut back in her own way. “Honestly I try not to use more than one straw a day,” she said. “I’ll rinse it and reuse it.”

“I always use reusable bags at the grocery store and laundry. I never use plastic plates or disposable cups,” she said. “So can’t straws be my thing?”

You Can Take It With You

When Emma Rose Cohen, 33, goes to bars in Santa Barbara, Calif., where she lives, and sits next to people using plastic straws she casually leans over and says, “Do you know what happens to that plastic?” (“Hopefully they enjoy it,” she said, about her friends who accompany her. “They keep asking me out, so that’s one thing!”)

She is a founder of FinalStraw, a reusable, collapsible straw that folds up so small that you can stick it in your purse or pocket (The other founder, Miles Pepper, left the company in February.)

The product was put on Kickstarter in April 2018, after which 38,443 backers pledged $ 1,894,878. It got a priceless boost when the founders appeared on “Shark Tank” last fall and had 5,700 plastic straws drop from the ceiling to show how many Americans use per second.

In 2018, New York Magazine reviewed the options with the headline “The Best Reusable Straw Is Made of Silicone and Burns Into Biodegradable Ash.”

FinalStraw has become a favorite of the VSCO girl, a pro-environmentalist female who posts photos of herself wearing scrunchies, carrying Hydro Flasks and parading around in backpacks made by Scandinavian brands.

But even Ms. Cohen, who is profiting from the movement, believes it is losing sight of the big picture. She estimates that in 50 percent of Instagram posts tagged with FinalStraw, the product is displayed inside a plastic cup or bottle.

“We have a message that we write back.” she said. “We say, ‘We see Final Straw as the first step in your sustainable journey, and we are here to support you as you really start committing to reducing your use of single plastics.”

Hoping to change the narrative, the company is working to release other products, like the FinalFork, scheduled to be available by the end of the year.

“We are excited to shift away from this mega-trend of straws,” Ms. Cohen said.

Mr. Gutsch of Parley for the Oceans argued that these items contribute to the planet being filled with more junk. “These products are simply documenting a moment of change, they are temporary pseudo-solutions,” he said. “We need the next big idea that makes these dumb little projects obsolete.”

And Mr. Jones, the nightclub owner, remembers his staff freaking out about how to serve large group cocktails (that come in gold disco balls) now that long plastic straws weren’t an option. “I told them we are going to have a ladle and pour it into cups,” he said. “It’s not the end of the world. We don’t always need to replace the straw.”

During a busy workday Hudson Street, in SoHo, is full of professionals getting lunch at Dig Inn, Hale & Hearty and Starbucks. On a recent Monday the hypocrisy (or confusion) around plastic was on full display.

There were customers at Starbucks who brought their own Hydro Flasks but used plastic torn off the lid to blend in milk. At Dig Inn, diners were eating in but using disposable plastic containers, not the silverware available. At Hale & Hearty, a young man with a Save the Planet sticker on his backpack ordered a salad that comes in a plastic container.

It’s easy to get frustrated by this reality, but Mr. Gutsch said that is the wrong approach. We don’t need every person to go plastic free, because the impact of people doing so isn’t that high. “The true solution is for big companies like Adidas or Corona or American Express to use alternative materials, and that is not in the hands of the consumer right now,” he said.

But consumers aren’t powerless. What they can do is yell and scream about plastic, to make it something taboo, so that companies and stakeholders are motivated to change their practices.

“Right now it’s about the message, and the message out there needs to be that plastic is bad, and it must go,” Mr. Gutsch said. “We have to create this climate of change so the companies and the stakeholders behind these industries become aware that the consumer doesn’t want plastic. And if everyone goes against one item made from plastic, that is a powerful campaign mechanism.”

Society is getting there, Ms. Cohen believes. “We’re getting to the point where if you use plastic, you get shamed,” she said. “It’s like it’s the new smoking.”