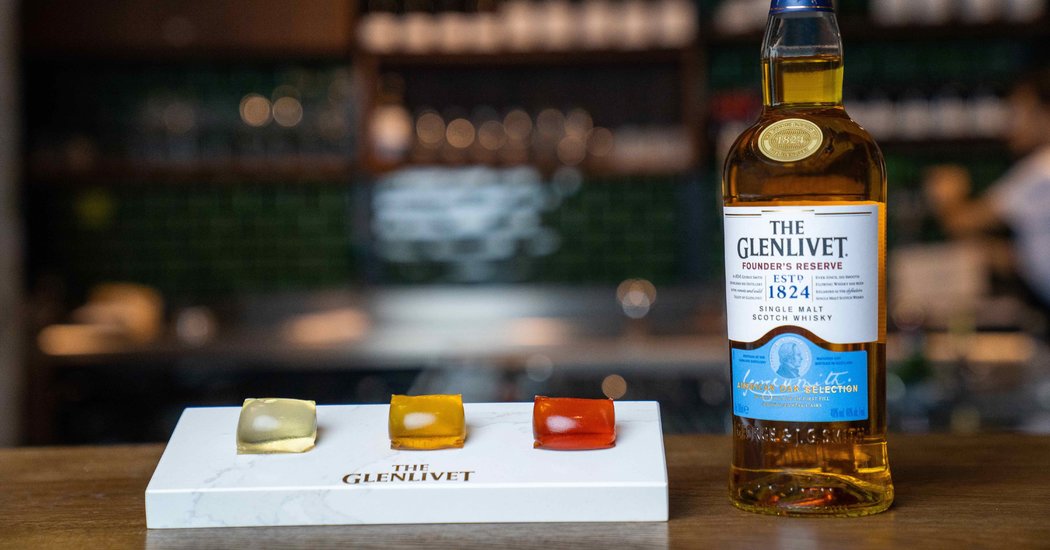 Glenlivet, one of the venerable names in Scotch whisky, experimented with something new this month: a tiny whisky cocktail that comes in a clear, edible packet instead of a glass.

It even came with a hashtag for social media: #noglassrequired. But Twitter users seemed unimpressed, and a little freaked out.

In a video released last week, Glenlivet described the walnut-size pouches as “edible cocktail capsules made from seaweed, meaning no need for a glass, ice or a cocktail stirrer.”

“To enjoy them, pop the capsule your mouth and take a bite to release the delicious cocktail ingredients,” said the video, which as of Monday had been viewed more than 8.5 million times on Twitter. Three cocktails are available in the pouches, and the recipes were developed by Tayer + Elementary, a bar in London.

Last year, Tide pods were wrapped up in a notorious “challenge” in which people filmed themselves biting down on brightly colored laundry detergent packets (of any brand) and spitting out or ingesting the contents. A few teenagers ended up in hospitals.

But whisky capsules are meant to be ingested (by people of legal drinking age). You can swallow the clear pouch, which comes from Notpla, a London start-up whose biodegradable packaging products have been used for things like keeping marathon runners hydrated without plastic bottles and paper cups.

The Glenlivet whisky capsules aren’t trying (yet) to be the next big thing. They are available only until Sunday at Tayer + Elementary, as part of London Cocktail Week.

Glenlivet traces its history to a distiller named George Smith, who made whisky illegally in the valley of the River Livet in Scotland until 1824, when he became the first legal distiller in his parish. That earned the ire of his unlicensed peers, so he kept two pistols on hand at all times to protect himself, according to Glenlivet lore.

Glenlivet did not respond to requests for comment on Monday. But the company did acknowledge the flurry of recent social media attention.

“It seems our cocktail Capsule Collection has caused a bit of a stir,” the brand tweeted. “We wanted to reassure you The Glenlivet is committed to producing safe, responsible & delicious products for adults. Our seaweed capsules are a limited London Cocktail Week release & are not available elsewhere.”