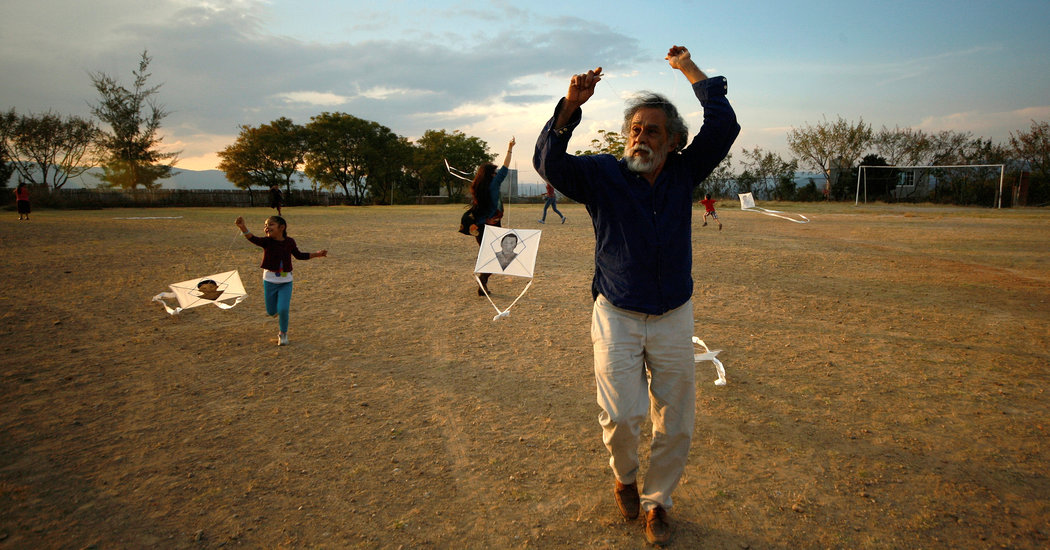 In his later years, the master artist Francisco Toledo, who died Thursday at 79, developed a fondness for making kites.

He decorated them with stencils of grasshoppers, turtles and shrimp, and prints of elephants with monkeys and skeletons, exhibiting a playfulness that simmered below the surface of much of his work and life.

But even in its most whimsical states, Toledo’s art was never too far removed from the social causes of the day. In December 2014, from his studio in Oaxaca, Mexico, he made a series of kites adorned with portraits of the “43,” or the 43 college students who were missing — disappeared allegedly by criminal and state forces in the neighboring state of Guerrero that year.

The students were mostly indigenous young men, and their presumed deaths shook the country. Toledo flew kites at demonstrations held in the students’ honor, and encouraged others to do the same as long as the 43 remained missing.

“You always thought he was one of those people who was going to live forever, he was such a tremendous voice for the arts in Mexico,” said Pilar Perez, an independent curator and gallerist who exhibited Toledo’s kites at the Oficina de Proyectos Culturales in Puerto Vallarta in 2015.

Cuauhtémoc Medina, the chief curator of the Museo de Arte Universitario Contemporáneo in Mexico City, said in an interview Friday that Toledo was “the prototype of the artist-activist for his region of the world.”

The man himself cut an innocuous figure: thin, white-bearded, dark-skinned and usually dressed in trousers and huarache sandals, the workaday attire of fellow indigenous men in Oaxaca.

But the artist’s presence was ubiquitous on the often contested streets of Oaxaca de Juárez, the capital city of the state in southern Mexico. For the place, he was a singular champion, and very much its product.

Oaxaca is fiercely political, and in cultural terms, most distinct from the national whole. It is the birthplace of both the gilded-era dictator General Porfirio Díaz, and the 19th century’s great reformist president, Benito Juárez, sometimes informally described as Mexico’s Abraham Lincoln. (Toledo once told Reuters that his father wanted him “to be Benito Juárez.”)

He was born Francisco Benjamín López Toledo in the southeastern Oaxacan city of Juchitán in 1940, a Zapotec “istmeño,” or one from Mexico’s Isthmus of Tehuantepec. He grew up partly on the Veracruz state side, where he encountered many of the animals and myths that would later populate his work.

He moved to Mexico City to study art, and then returned to Oaxaca, where the movements on hand would be aplenty. Indigenous Oaxacans routinely rallied against development projects that they argue hinder or alter their way of life.

Whether it was a fight to stop a McDonald’s on the city’s central zócalo, or advocacy work for the area’s ethnic indigenous subgroups, including the Mixtec, Mixe, Triqui and his native Zapotec, Toledo showed up. One obituary in a Mexican newspaper called him “Oaxaca’s greatest defender.”

To museum-goers, he was beloved for his paintings, prints and drawings — surreal yet expressionist fragments of daily life in the Oaxacan country. He sprinkled his work with echoes of shamanistic myth and the ancient histories of Mesoamerica. He drew from European influences, but rarely veered from Oaxaca, conveying the sensuality and natural richness of the state.

“He talked the talk and walked the walk,” said Odilia Romero, a Oaxacan community organizer and Zapotec interpreter in Los Angeles, which is home to the largest concentration of Oaxacans in the United States.

“He put the name of Oaxaca and the indigenous pueblos of Mexico on high in the world. He always stood in solidarity,” she added.

That activism extended to his adult children, who include the visual and tattoo artist Jerónimo “Dr. Lakra” Toledo; the artist and writer Laureana Toledo; and Natalia Toledo, a leading poet in the Zapotec language. Each, in their own way, have matured into advocates and ambassadors for Oaxaca like their father.

The Legacy He Leaves

Beyond the streets and the museum halls, Toledo built a robust physical infrastructure for the arts in his home, starting in 1972 with the opening of the Casa de Cultura de Juchitán, which he founded with the poet Elisa Ramírez. Later, the unofficial center of Toledo’s philanthropy became the Instituto de Artes Gráficas de Oaxaca (or IAGO), an institute and library that remains an active incubator of young indigenous artists and writers in Oaxaca.

Since Thursday night, mourners and well-wishers have been gathering there, according to local accounts, bringing flowers and gifts to help send Toledo into the afterlife.

“I hope a lot of us could follow in his footsteps,” Romero said. “Defending our land, standing up with indigenous people in solidarity, especially in these times of extractivism, where they’re taking our land, our mezcal, our water, our clothes, our food.”

With Toledo, never forgetting one’s roots seemed synonymous with action on behalf of the common good, said Sandra de la Loza, an L.A.-based artist and a friend of one of his children.

“Toledo was a maker — a maker of artwork that dealt with the realms of deep historical ancient memory and indigenous cosmology,” de la Loza said. “But he’s also someone who was deeply rooted in a place. In his case, it was Oaxaca.”