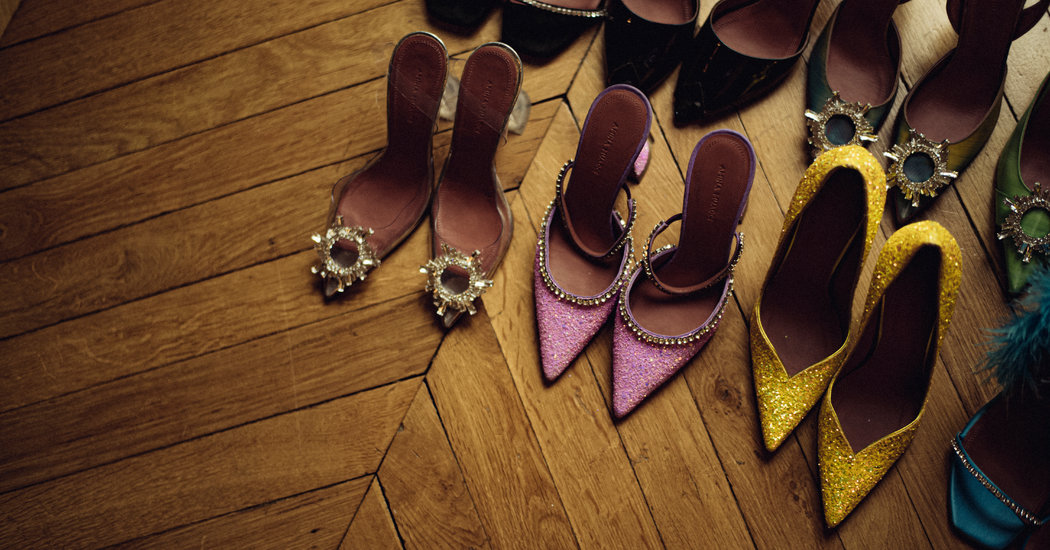 One of the most coveted items of the holiday season could have been plucked from a Disney fantasy.

An exotic reimagining of a Cinderella glass slipper called the Begum, it is also one of this season’s most blatantly knocked-off designs. Loose interpretations of its spindly rococo heel have cropped up at stores and e-tail sites including DHgate, ASOS, Jeffrey Campbell and Poshmark.

“I see a lot of replicas on Instagram, even on my hashtag,” Amina Muaddi, their designer, said by phone from her office in Paris. “Some even have my name on them.”

Not that she is losing sleep over it. Few people know better that a profusion of knockoffs can be one measure of success. More amused than chagrined, Ms. Muaddi has filled an album with images of look-alikes, many sent to her by friends.

Her confidence is bolstered by celebrity fans, including Rihanna, Gigi Hadid and Kendall Jenner. Ms. Jenner and Hailey Bieber were photographed in her shoes during New York Fashion Week in September.

“Amina has developed an ‘It girl’ following, mostly through her social media,” said Will Cooper, the vice president and divisional merchandise manager for shoes at Saks Fifth Avenue. “Women who’ve seen her shoes on the street are asking for her heel.”

A stiletto with a flared base that acts as a supportive pedestal, that heel has become a florid signature, Ms. Muaddi’s answer to the Louboutin red sole. “I realized that I wanted the feminine look of a stiletto but with a bit of an edge,” she said. “Once I put those heels in the collection, every style looked cooler.”

Her shoes are playful enough to border on kitsch, arresting enough to have caught the eye of social media stars, magazines editors and civilians. A scattering of fashion features, including one in the November French Vogue, have reinforced her star status.

For Ms. Muaddi, 33, all that attention seems a matter of course. “I have an instinct for shoes,” she said simply. But it was an untrammeled drive, a sense of whimsy and a robust gift for self-promotion that set her apart. Fashion, always scanning the horizon for the next sensation, has conferred cult status on Ms. Muaddi, who is thriving at the moment in a notoriously competitive industry.

“That market’s on lockdown,” said Michael Nash, a celebrity stylist for whom Ms. Muaddi worked as an intern at GQ before discovering her métier. In past years, Christian Louboutin and Manolo Blahnik dominated the red carpet. “Even now there are only a few select spots for a new design star,” Mr. Nash said.

Unfazed by the odds, Ms Muaddi turned to Instagram practically at its inception after styling stints in Europe and the United States. “She got the social media thing really well,” Mr. Nash said. “She is not afraid of going up to a celebrity wearing her shoes and asking to take a selfie with her. She is part of a generation that understands innately that a make-or-break factor in this business is how you self-promote.”

But a business can’t be built on self-promotion. A half-dozen years ago, Ms. Muaddi, who is of Jordanian and Romanian descent, traveled to the Riviera del Brenta near Venice to work alongside local artisans, intent on mastering every facet of her craft.

In 2013, with a business partner, she founded Oscar Tiye, her first label. She introduced her namesake label a year ago.

She remembered her naïveté with a laugh. “When I started in this industry, I had no clue of all the difficulties I would encounter — problems with product development, delivery schedules and handling finances,” she said. “It was like working on 50 different jobs.”

Today her shoes are sold from Dallas to Dubai, at prices in the United States from about $ 650 to $ 1,200. Those figures are no hurdle to shoppers at Neiman Marcus, where sales have outstripped expectations, said Kel Rowe, the buyer for women’s shoes.

“There is a lot of energy focused on those shoes right now,” Mr. Rowe said. “They appeal to a sexy, high-spirited customer.”

Ms. Muaddi credits factors including the height of the arch, a bit of toe cleavage and sparkle with lending shoes their sex appeal. In conceiving her designs, which vary from bejeweled sandals to curvaceous, high platform boots, she steers clear of street trends.

“You can wear trainers or a chunky boot and look cool,” she said. “But if you think you’ll look sexy, you won’t.”