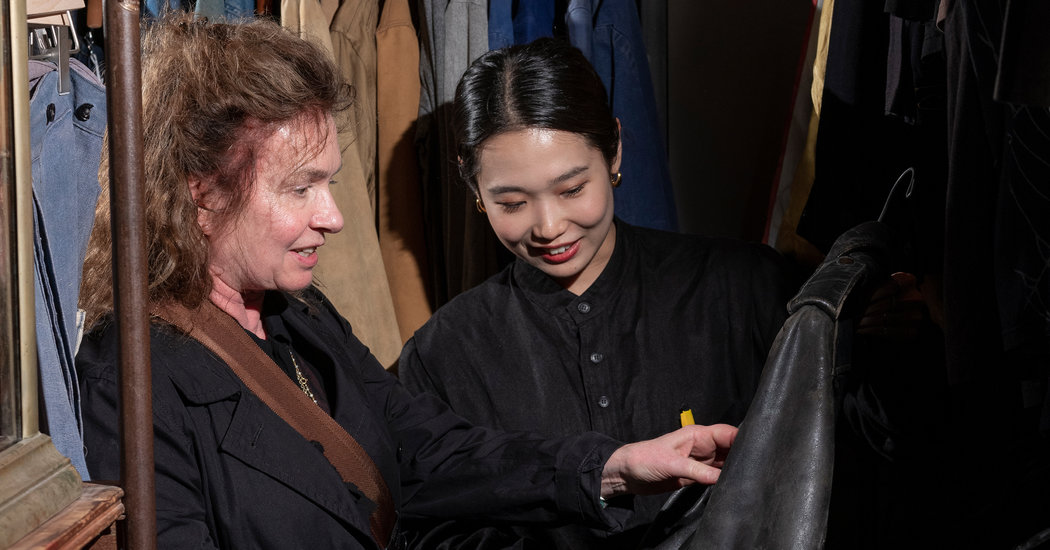 “My mother was a crazy person with the ’60s hats,” said Donna Zakowska, the Emmy-nominated costume designer for “The Marvelous Mrs. Maisel,” the popular Amazon series about a woman who dives into the New York comedy scene of the 1950s.

But Ms. Zakowska, who lives in the West Village with her longtime boyfriend and collaborator, the director and puppeteer Roman Paska, relies on a darker palette for her own clothing. She will most likely wear “something black,” she said, to the Emmy Awards, which will take place in Los Angeles on Sept. 22.

BERRY SOUP I get up at 8, which, having been up by 4:30 to be on set by 6, is late. I’m a ritualist about my morning meal: I always make a French drip coffee called La Semeuse (you have to get it online). I always cook berries (blue, black, sometimes currants) in rosewater and tart cherry extract; then sprinkle them with walnuts and cinnamon. The berries come from LifeThyme on Sixth Avenue, which is like the last health food store standing in the West Village.

CHAT, COLLAB When I’m not doing television, Roman and I collaborate on theater pieces for his company, Dead Puppet. Sunday morning is the first time I get to talk to him all week, so breakfast chatter is chock-full of whatever creative thing we’re planning. One recent Sunday we thought, Wouldn’t it be great to do the ultimate clown puppet show?

ARTSY BUILDING It’s a fifth-floor walk-up, but Paul Bowles lived in our apartment and it has lots of skylights. The choreographer Martha Clarke — who I also design theater pieces with — lives in the building. So really, there’s a lot of creative energy. I’ve been living here nine years. I’ve been living on 10th Street — east, and now west — since I left university.

RESET After breakfast, I go out and look at something that’s not about clothing. Maybe the Rubin, a Tibetan museum near the apartment that clears my mind. I’ll wander into Three Lives bookstore because they always have autographed copies. Just bought the latest Patti Smith there. I studied a lot of poetry at Barnard.

FAMILY HOME Or Roman and I go to my Vinegar Hill house from 1850 that my grandfather owned. I keep the upper-floor pretty empty because when I work on a project there I sort of invade it. Like right now I’m building puppet clothes for a show we’re doing in France at the end of this month. It’s poetic adult theater, but with puppets.

GRANDMA STARTED IT On Sundays growing up in that Vinegar Hill house, my grandma would lug home satchels full of Victorian capes and purses from Lower East Side flea markets. They’d be falling apart, and she’d say, “Oh, but look at the beautiful buttons on this.” So really, I grew up with all this stuff around me.

FRENCH CONNECTION Then I like to walk down the block to Front General Store and look at jewelry mindlessly, without a timeline. My greatest love: French work clothing. I found a French work jacket and vest for Abe, Mrs. Maisel’s father, played brilliantly by Tony Shalhoub, there. Front General gets lots of turn-of-the-century clothing in from France. It’s owned by these Japanese guys I’ve known for years from various productions.

PINK DRINKS Roman and I reconvene at 6 for early dinner at Cafe Cluny, which he calls “our canteen.” I try to have fish and vegetables. I’ll always have cosmos on Sunday. I like the pink drinks. And now I’m doing “Mrs. Maisel,” so I guess it all connects.

THE PLOT IS ABOUT THE CLOTHES When the night is over, I watch British dramas like “Peaky Blinders.” Oh, it’s fantastic. Sort of a 1919 crime, not really crime, show. It’s about a gang in London who wore incredible newsboy hats with little blades under them. I never get to bed before 11. I just function on five and a half hours of sleep. But I’m fine.