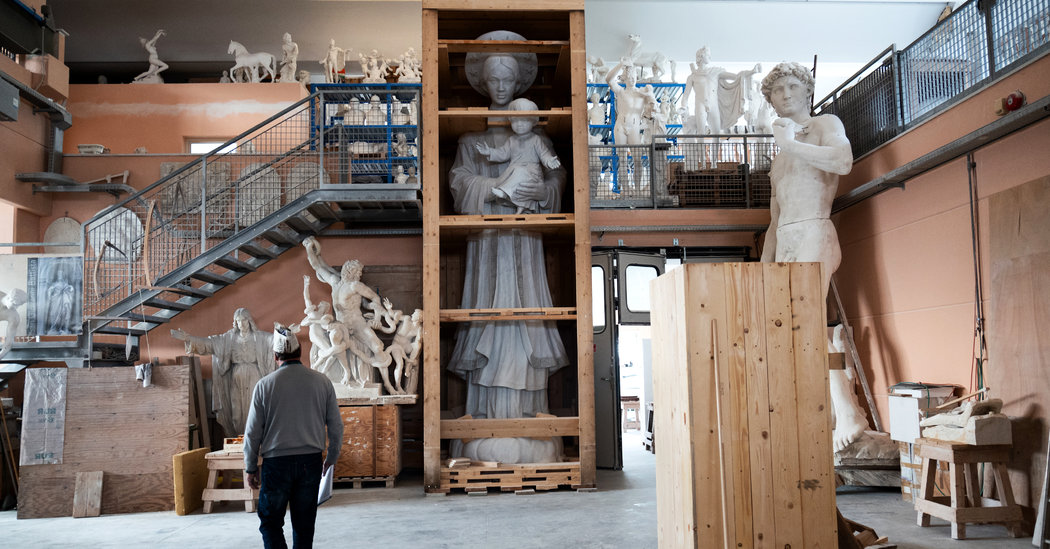 PIETRASANTA, Italy — Franco Cervietti carved his first full-size copy of Michelangelo’s “David” when he was 29. He would sculpt the 17-foot-tall masterpiece five more times over 60 years in his family’s Pietrasanta workshop, chiseling it in the same cloud-colored Carrara marble that Michelangelo selected from the quarries of this area, a stone first excavated here by the Romans more than 2,000 years ago.

“The ancient Egyptians worked every kind of stone, and so can we,” Mr. Cervietti said. “But the stone from around here is the best.”

The quarries among the marble crests of the Apuan Alps — gleaming white, like snowcaps on the ridge’s peaks — transformed the pocket-size town of Pietrasanta (2018 population: 23,600) and its surrounding hamlets into Italy’s world-renowned sculpture capital.

Pietrasanta counts 55 marble workshops and bronze foundries in its mere 16 square miles, sandwiched between the mountains and the Tyrrhenian Sea in Tuscany. Over the years it has drawn celebrated international artists — including Henry Moore, Isamu Noguchi, Igor Mitoraj, Joan Mirò, Fernando Botero and Niki de Saint Phalle — to work and, in some cases, to live here.

The town’s intimate grid of lanes is an open-air museum of marble and bronze, with 75 public monuments by artists like Kan Yasuda, Botero and Mitoraj (a longtime local whose first dedicated museum is scheduled to open here in 2022) alongside workshop lots crowded with Pietàs and Venus de Milos, Virgin Marys and Salomés, Eisenhowers and Saddam Husseins.

As a blizzard of marble dust blurred the Cervietti workshop on a recent workday, Mr. Cervietti watched his son Hayato gouge away chunks of marble with motorized and old-fashioned chisels. With a pantograph — a centuries-old tool composed of pointers connected by an accordion arm — Hayato Cervietti painstakingly transferred pencil-mark locations on a plaster model of a standing nude to the marble sculpture taking shape.

“Machine manufacturing has had an impact, but we still work manually for the most part,” Mr. Cervietti said, noting that the nine-member team makes only about 60 sculptures a year.

Today, computers — hyper-precise digital counterparts to the pantograph — can three-dimensionally scan a complete model and then carve marble to match, but the result can be as inexpressive as its maker. “Our artisans learn to craft by eye and by hand here,” he said. “It’s time-consuming, but it’s art.”

As Mr. Cervietti wandered through his warehouse, a couple of the artists that the business collaborates with today mingled with his artisans (all streaked with marble powder and some wearing the trade’s traditional hat of folded newsprint: “Keeps the dust out of our hair,” one said).

Nataliya Chernakova, a Venice-based Russian artist who spent six months in Pietrasanta last year to learn the art of marble-carving alongside the artisans here, showed off lemon-shaped totems named “Her,” each tipped with a nipple and labia. And Gustavo Vélez, a Colombian artist in Pietrasanta since 1996, directed the installation of the black granite base for “Rítmica,” the undulating, monolithic cube he carved from a 27-ton marble block over five months, with help from Cervietti’s artisans.

Above all the activity, Mr. Cervietti’s gallery of 2,400 white plaster statues gazed out mutely from the mezzanine level.

The first sculpture workshops in Pietrasanta opened their doors in the 1400s; the workshops flourished with the 1842 inauguration of a high school to train artisans (today called the Stagio Stagi creative arts school), and as the Neoclassical vogue drove demand for statues in cemeteries and churches, and for civic commissions to suit the nationalist objectives of the leaders of a newly united Italy.

Henry Moore, the first modern artist to settle in the area, arrived in 1957 to make “Reclining Figure” for the UNESCO headquarters in Paris. Smitten, he bought a home in nearby Forte dei Marmi and enticed friends like Noguchi, Mirò, Jean Arp and others to the area.

Moore turned to Henreaux, a two-century-old marble company in neighboring Querceta that mined the Monte Altissimo quarries (Michelangelo opened them in 1518 for his never-completed facade of the San Lorenzo church in Florence). The company, which now also operates a foundation and offers annual prizes for sculpture, owns the entire marble-rich, almost 5,600-foot-high summit — which is a hairpin drive up the mountainside from the area’s workshops.

Today Monte Altissimo is half carved away, its jagged natural crags cut into an amphitheater of hulking Cubist bluffs, chalk-white and veined with pewter gray. There, men in fluorescent orange jackets, dwarfed by the sheer stone walls, cut straight blocks 10 feet deep with diamond-toothed power saws and wires.

“The first strikes to the marble block were not by Michelangelo but by quarry workers like us,” he said with pride. “We’re the ones that make it possible for artists to work in marble.”

Now nearing 80, Mr. Pierotti reminisced about fixing lunches of minestrone, steak and Chianti to share with Moore. Touching his chalk to a bulldozer’s towering wheel, he sketched a shepherd’s ricotta dessert of whiskey and coffee that was beloved by the artist.

Over the last two decades, Pietrasanta’s artisan workshops have been resettled just beyond the minuscule center to keep the dust away from residents, but the artist’s studios remain there, between the upscale shops and restaurants aimed at the growing number of art-curious tourists. The main piazza, with its milk-colored marble Romanesque church and rotating public exhibitions of large-scale sculpture, is bordered by rows of alfresco bar tables where artists and artisans continue to gather after a day’s work.

At one corner of the square, a 16th-century convent is home to the Museo dei Bozzetti, or the Museum of Maquettes, which claims to be the only museum of artists’ plasters in the world.

“It’s a museum where the direct relationship between artists and the craftspeople who fabricated their works is visible,” said Chiara Celli, the director, as she motioned toward a vitrine with a 10-inch plaster piece by Noguchi, made in 1968. The small, sinuously gnarled turkey bone of a model, blanketed in pencil points and guidelines, was converted by Henraux’s artisans into the 7.5-foot “Ding Dong Bat,” a serpentine marble sculpture now at the Noguchi Museum in New York City.

Since it opened in 1984, the Bozzetti museum has collected almost 900 of the models that were rendered as full-size artworks by the local marble workshops and bronze foundries.

Foundries opened here in the late 19th century to complement the marble studios’ services for sculptors. At the Massimo Del Chiaro foundry, its 30 artisans “are all artists,” said Franco Del Chiaro, whose father taught the techniques to him and the workers. “Here you learn to craft the sculptures of Botero, of Mitoraj and Penone.”

He gestured around the warehouse space, filled with castings of pieces by Giuseppe Penone, a luminary of Italy’s Arte Povera movement of the 1960s and ’70s. His towering bronze tree trunks were clustered on the concrete floor, an unexpected indoor thicket in metal.

Mr. Del Chiaro creates his sculptures in bronze with the traditional process known as lost wax casting: Rubber molds are melted around a model, usually of plaster, and then lined with wax and filled with a mix of clay and other material; once heated, the wax melts out and is replaced with molten bronze. The sculpture, once released from the mold, can be soldered, polished and patinated into its gleaming final form.

The antiquity of that process captivated Gustavo Aceves, a Mexican painter who moved to Pietrasanta eight years ago to pivot to sculpture. “Lapidarium,” his traveling open-air sculpture exhibition calling attention to the eternal plight of human migration, is scheduled for New York in 2021.

Thanks to its artisans, “there’s no better place in the world to make sculpture,” the artist said of Pietrasanta. He previously lived in Mexico City, New York and Paris.

In his sprawling warehouse studio, Mr. Aceves cued up Mozart’s “Mass in C Minor” as an operatic soundtrack to his comments on the skulls, boats, African-style figures (“We are all exiles from Africa,” he said) and snarling horses that packed its high-rise shelves and aisles, including a 30-foot model that was transformed by Carlo Barsi’s L’Arte foundry into a hulking bronze steed.

At the foundry, Mr. Aceves retouches waxes and refashions pieces alongside the artisans who cast his creations, continuing the region’s age-old collaborative tradition.

“Sculpture is not solitary work,” Mr. Aceves said, tipping back his Borsalino as the soprano’s voice crescendoed through the studio. “Painting is a solo song. Sculpture is a chorus.”