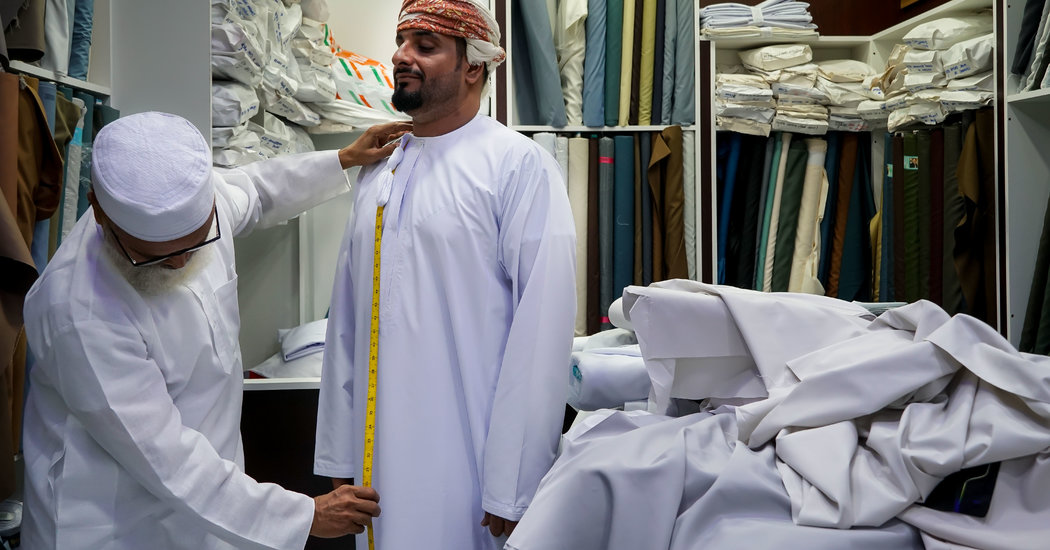 MUSCAT, Oman — In the alleyways near the Mutrah Souk here, amid the chattering families out for a stroll or the barefoot old men playing cards outside a small neighborhood mosque, Bangladeshi and Indian tailors tend to the business of dressing Omani men in their everyday best.

Such scenes have played out all across the Persian Gulf countries for the last half century or so, but the attire specific to Oman makes its streets a bit of a fashion runway. In fact, the dishdasha — the almost-floor-length white gown worn by Omani men (and pronounced DEESH-dasha) — is such a part of the country’s identity that the government regulates its design to preserve Omani culture.

Yet almost every tailor here — and virtually all dishdashas are made to order — is a Bangladeshi or Indian immigrant who has perfected a trade learned from an Omani tailor. In a country of 4.6 million people, where nearly half are expatriates, the business of creating the national attire is now a multinational undertaking.

For Abraj Allak, the dishdasha has been the foundation of his tailoring business for nearly 40 years. A Muslim immigrant from Bangladesh, Mr. Allak came to Oman in 1978. He spoke little Arabic but sought a new life in a country that, only a few years earlier, had recognized the oil beneath its deserts as the balm of its future.

“I studied with one Omani tailor who taught me everything,” said Mr. Allak, his tape measure dangling from his neck and his beard dyed orange-red from henna. “I knew nothing about the dishdasha when I came here.”

The government requires any business started by a foreigner to have an Omani citizen as its sponsor. So Mr. Allak found one for his small tailoring business, and their relationship has continued over the years — just as the country has grown richer thanks to its oil and natural gas deposits.

And that decades-long relationship is also reflected in his clientele, which now includes second and third generations.

A blistering late-summer evening found a customer, Jaffer Al-Ajmi, ordering a dishdasha for his wedding in November. The garment would not be opulent, but more like the crisp white ones he wears daily — and made from the same high-quality Japanese polyester that Mr. Allak uses for all his not-a-wrinkle-in-sight dishdashas. They range in price from about 15 to 20 Omani rial, or about $ 40 to $ 52.

“It’s just a little bit blue,” Mr. Al-Ajmi said, rubbing the silky and oh-so-faintly azure fabric that Mr. Allak had laid out on the counter. “I will wear it one time and then put it away for my memories.”

Like his father, who has been coming there for nearly four decades, Mr. Al-Ajmi gets his dishdashas only from Mr. Allak at his tiny salon, tucked in an alley near the bustling waterfront that stretches between modern Muscat to the west and small villages and glamorous five-star resorts to the east.

“His service is worth the long drive to the old part of Muscat,” Mr. Al-Ajmi said, as Mr. Allak beamed.

A dishdasha, which is almost always white (with occasional darker colors for winter), is designed with detailed embroidery at the neckline, as well as along the shoulder line and around the cuffs. A placket opening reaches to midchest, making the garment easy to pull over the head.

And the pièce de résistance is the tarbusha, a tassel that is attached to a button at the neckline — often after it has been dipped in cologne, traditionally oil of oud, second only to frankincense as the most coveted fragrance in the country.

(There is a traditional undergarment, called a wizar, that wraps around the wearer’s hips and falls to his calves, but many men now wear just a T-shirt and boxers.)

At a workroom in an alley near the salon, Mr. Allak’s three assistants do the intricate needlework by hand and on sewing machines that often are decades older than themselves. The sound of the whirring machines fills the street, as does the clamor of sewing machine repairmen who are never too far away in this engine room of dishdasha commerce.

Accompanying all dishdashas are the kumma, an intricately embroidered headdress that is part of daily wear (many workplace dress codes require it), and the massar, a colorful turban that goes over the kumma and is worn in the evening, especially at formal occasions. These headdresses, generally made of cotton or a cotton-cashmere blend, embody the multicultural history of the country’s fashion.

The Omani empire centuries ago spread as far south as Zanzibar and as far east as Pakistan. This mash-up of history and cultures is a result of Oman’s role in maritime trade routes, particularly the Frankincense Trail. The country was briefly occupied by the Persians and the Portuguese but otherwise has mostly remained peaceful, thanks in part to its embrace of Ibadi Islam, which is tolerant of other religions.

According to local lore, the massar originated in Kashmir and the kumma along Africa’s Swahili coast, where it is called the kofia. A swirling and colorful combination of diamond shapes, triangles and other patterns, the kumma is rarely handmade these days, although some elderly women still make them as gifts for their grandsons or to sell to the true Omani fashion connoisseur for a few hundred dollars.

Mohamed Blushi, 41, found Mr. Allak completely by chance, as the tailor’s shop where he usually goes was closed for vacation. Several tailors operate in the same alley, and many of their signs simply say “Gents Tailoring” in identical blue letters (with the proprietor’s name in much smaller black ones).

“I normally go to the guy next door,” said Mr. Blushi, who also wanted several dishdashas for his wedding. “But all of them have the same quality, and he had a nice variety of colors and good prices.” He was accompanied by his fiancée, Hanan Masqati.

Their wedding will take place over several days, so Mr. Blushi ordered five dishdashas in various colors, as well as three or four massars. He also plans to wear a khanjar, the traditional dagger in the shape of the letter J that accompanies formal wear for state occasions, weddings and even evenings at the Royal Opera House Muscat. (The city’s striking opera house, opened in 2011, is something of a showplace for local fashion, the way one imagines a European opera house was a century or so ago.)

The dishdasha differentiates Omani men’s wear from that in the other Gulf countries. The thawb robe seen in most other Arabian countries often has a collar and a buttoned placket — almost like a floor-length men’s dress shirt. The headdresses of neighboring countries also differ from Oman’s: The red- and white-checked shmagh and the similar all-white flowing headdress, both common in other Gulf countries, are seen rarely in Oman.

The distinctive Omani attire is something the government has sought to preserve in the last few years, after some tailors introduced designs from neighboring countries. The Ministry of Commerce has ordered tailors to stop adding such elements into men’s clothing and into the abayas, worn by women.

This is driven home by the ever-present portraits of Sultan Qaboos bin Said al Said, the country’s supreme leader, dressed dashingly in full formal Omani attire, which adorn murals, office buildings, restaurants and homes across the country. He is the perfectly coifed sultan, and the colors of his dishdasha and massar often match. He serves as an inspiration to men across the country, including in that tucked-away alley near the souk.

“We are proud of wearing our traditional clothes,” Mr. Blushi said, and looking at Ms. Masqati, his fiancée, with a wink, he declared: “I feel like I’m always standing in front of the mirror. I think I look very handsome, maybe even to women who aren’t Omani.”