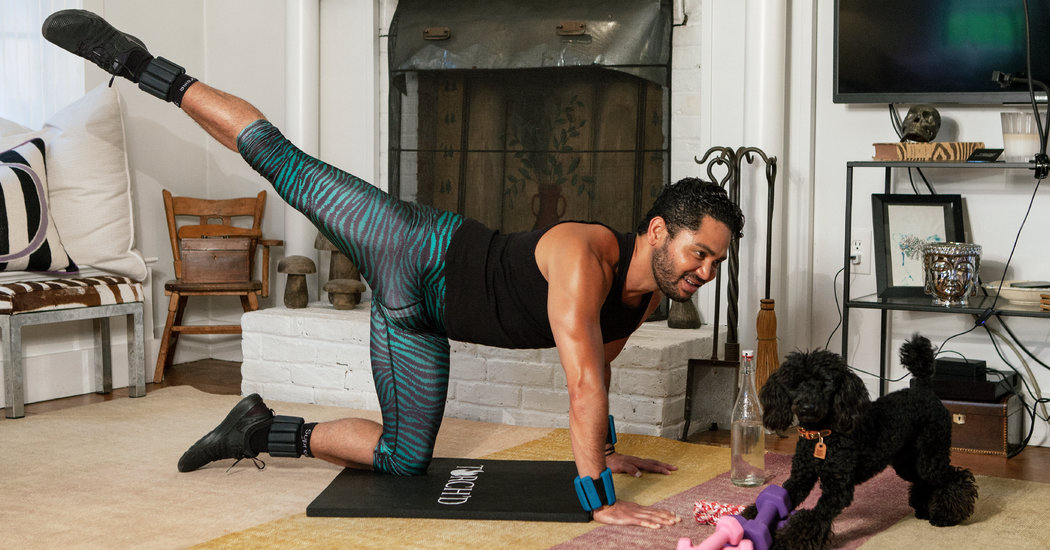 Every morning, Isaac Calpito sets the stage in the East Hampton living room of his friend Stephanie DiTullio. Mr. Calpito, 39, is dressed, often, in sparkling yoga tights and a tank top that show his muscles to good advantage. His main prop is an iPhone.

At 11 a.m. sharp, accompanied by a new playlist chosen by Ms. DiTullio (a.k.a D.J. Steph), he turns on Instagram Live and welcomes thousands of housebound fitness buffs and at least one Real Housewife, all of whom tune in to take part in (or at least watch) Mr. Calpito’s Torch’d workout.

For 45 minutes, the music pumps as he cycles through push-ups and squats, giving cheeky tough-love directions. At a time when it’s difficult to introduce a new product or a business, Torch’d has become, rather organically, the breakthrough workout of the stay-at-home era.

Mr. Calpito has been leading the classes virtually since March 17. Last week, about 2,500 people tuned in every day. The video of each class remains accessible on Instagram for 24 hours, and he said an additional 17,500 people typically tune in during that time. (On three occasions, Mr. Calpito has broadcast on a split screen that showed the actress Vanessa Hudgens and Lisa Rinna, a star of “The Real Housewives of Beverly Hills,” doing their Torch’d workout. Each of those classes attracted about 8,000 live viewers. The last time Mr. Calpito featured Ms. Hudgens, more than 250,000 people watched during the 24-hour period.)

The class is free, but Mr. Calpito asks that people taking it consider making a donation to No Kid Hungry, a charity that helps provide meals to children in need. So far, he has raised more than $ 200,000.

After getting Torch’d, you’re likely to wake up sore the next day. But Mr. Calpito’s constant monologue keeps exercisers coming back. “A lot of you are so preoccupied with whether to point or flex your toes,” he said during one session earlier this month. “Just move your damn leg, OK? Like, you’re not auditioning for American Ballet Theater. Those days are gone. Just torch that” rear end, he said. Alas, it’s difficult to quote Mr. Calpito’s mid-class soliloquy without running into a word that rhymes with “sass.”

“This one’s for you, Taylor, and every boy who ever broke my heart,” he said recently, while doing tush-toning leg circles as a Taylor Swift song played. He cursed his exes, then continued his instruction: “Now carve out that real estate, baby!” There will also be the occasional wry, off-topic cultural observation (“When did all the gays get married? It’s so confusing to me”).

The trainer coos over his poodle, named Davis after Bette, who prances into the frame from time to time, often wearing a red Gucci cardigan. “He’s a bit fancy. I try to keep him humble and remind him that his father grew up on food stamps,” said Mr. Calpito, who was raised by a family of humble means in Waimānalo, Hawaii, a small town on the island of Oahu.

Davis preens as Mr. Calpito keeps his own legs suspended an inch off the ground for an excruciating amount of time and tells you that you should be doing the same. This is unlikely but the chaos keeps the eye on the screen and the cruncher or jumping-jacker from quitting altogether.

Then there are the emojis and comments from bold-faced Instagram handles, cascading down the screen as Mr. Calpito calls out names. “Hey Vanessa Hudgens!” “What’s up, Michael Rapaport?” “Hey Christy Turlington!” “Hey Jessica Chastain, how’s your grandma?”(It’s a mystery how the constantly mentioned Lizzie Tisch is able to text so much while she’s purportedly in plank position.)

Thus he manages to approximate the feel of sweating in a packed room alongside friends and strangers, some of whom might be rich and famous.

Mr. Calpito’s success has been a long time coming, according to his friends and fans. “Isaac is one of the most entertaining people you will ever meet,” said Kelly Ripa, who has known him for 18 years and who last month gave him the “Live with Kelly and Ryan” bump when she told viewers that she’s been taking his Torch’d classes on Instagram.

“I just think he’s tapped into the moment,” Ms. Ripa said in an interview. “He’s put the fun into working out and the community back into the lives of people. He’s made a great big alienated, desolate world feel very small, and all you need is your phone.”

Ms. Rinna, so much a regular that Mr. Calpito has named an on-your-side-Rockette-leg-kick “the Rinna,” says she plans her mornings around Torch’d. “It gives me something to look forward to,” she said, adding that after 10 weeks, her derrière has never looked better. “I don’t like to work out by myself, I’m a class girl and at the end, I feel like I’ve just been to a boutique fitness class.”

As a boy who loved dance and theater, Mr. Calpito was bullied, but kept at it, encouraged by his grandmother and mother. In 1998, just after graduating from high school, he booked a one-way flight for New York. He slept on the floors of friends’ dorm rooms, hit audition after audition and got his first big gig within six months, as part of the touring cast for “Mamma Mia.” In 2003, he joined the ensemble of the Broadway production.

“Six years of eight shows a week,” he said. “It’s a tight-knit family on Broadway. I learned discipline, compassion and the importance of community.”

He next was cast in the 2009 Broadway revival of “West Side Story.” The production was directed by Arthur Laurents, who wrote the book for the original musical back in the 1950s. “Arthur became a very important mentor for me,” Mr. Calpito said. “He kept me on track for bigger goals. He was a father figure.”

It was during the production that Mr. Calpito created a floor-exercise circuit to give himself a full-body workout when he had no time to go to the gym. “I created this flow and this method that I knew would work for me, and I did it alone every day on the stage of the Palace Theater with my boom box with Madonna playing before performances,” he said. “Before long, other castmates started doing it with me.”

After the show closed in 2011, Mr. Calpito moved to Los Angeles to work as a choreographer for pop stars like Ariana Grande and a fitness trainer for celebrities including Faye Dunaway. In 2015 he began working as a SoulCycle instructor in New York. He left the company in 2019 and has focused on private sessions and Torch’d since, leading classes at Art Basel.

In mid-March, Ms. DiTullio contacted him and suggested he pack up his two dogs (the other has since died of old age) and shelter with her. “Days into the quar, I was wondering how I was going to connect with my clients so I offered the Torch’d workout as something as a one-off,” Mr. Calpito said. A few hundred people from all over the world tuned in. “It surpassed any of my expectations,” he said. So he kept going.

Caryn Wall, 54 and sheltering at home in Virginia Beach, Va., with her husband and two teenage children, started doing Torch’d after hearing Ms. Ripa talk about it on TV. “Isaac’s doing every single move with you, he’s sweating just like you are, he has wonderful energy and the whole time you hear him calling names like Lisa Rinna and Aerin Lauder,” said Ms. Wall. “You feel like you’re in the class with them.”

Mr. Calpito is working on an app that will offer his workouts, but through the summer he will continue to broadcast to Ms. Wall, Ms. Chastain, “my best friend’s Aunt Jan who lives in Jersey” and all the rest.