Jonathan Van Ness was having a late breakfast at the Empire Diner, around the corner from his one-bedroom apartment in the Chelsea neighborhood of Manhattan.

Seated in a window booth, he was serving what he calls his “16th-century Jesus” look: Hollywood-starlet tresses, a mustache à la a Super Mario villain and fingernails painted with cartoon depictions from the 1996 film “The First Wives Club.”

But Mr. Van Ness was not feeling his normal gorgeous self, the boisterous “Yass queen” merman that fans of “Queer Eye” adore. He was hung over.

And no, it wasn’t from partying too much. It was a “vulnerability hangover,” to use a term coined by Brené Brown, a TED Talk-famous researcher, to describe feelings of dread after being forthcoming.

“I’ve had nightmares every night for the past three months because I’m scared to be this vulnerable with people,” Mr. Van Ness said.

For much of the summer, Mr. Van Ness, 32, has been mentally preparing himself for the release of his piercing memoir, “Over the Top,” on Sept. 26, in which a different image of Mr. Van Ness unspools with remarkable transparency.

Subtitled a “Raw Journey to Self-Love,” the book doesn’t so much explode as offer psychological insight into the hirsute gay fairy godmother in heels or, as he puts it, “the effervescent, gregarious majestic center-part-blow-dry cotton-candy figure-skating queen” that he portrays on “Queer Eye.”

“It’s hard for me to be as open as I want to be when there are certain things I haven’t shared publicly,” he said. He cracked his knuckles as he fidgeted from nerves. “These are issues that need to be talked about.”

He ordered another cup of coffee, his fifth of the day, and began tearing up as he spoke about a particularly painful memory, one of many that he divulges in his book. When he was much younger, he was abused by an older boy from church, during what was supposed to be a make-believe play session.

“For a lot of people who are survivors of sexual assault at a young age, we have a lot of compounded trauma,” he said.

Suddenly, a 20-something woman with a ponytail appeared at the table. “I’m so sorry, I can’t take a picture right now,” he said, discreetly wiping his eyes.

“Thank you. Namaste. Have a nice day,” he said, clasping his hands in prayer.

Mr. Van Ness exhaled and gently took a sip of coffee. “If you’re having a terrible moment or in the middle of a conversation about something serious, people don’t care,” he said. “They want their bubbly J.V.N. and to get that major selfie.”

In a sense, the memoir was a way for Mr. Van Ness to tell his story without interruption. There are certainly moments that may make some readers pause.

Mr. Van Ness grew up in Quincy, Ill., a small port city along the Mississippi River, where he was a self-described “little baby queen” unafraid to embrace his femininity. It helped to have a mostly supportive family, including a mother he considers a lifelong best friend.

The Van Ness family owns Quincy Media, a media company that operates 16 televisions stations in Illinois, Wisconsin and elsewhere, as well as two local newspapers. His mother, Mary Winters, is the company’s vice president; his father, Jon Van Ness, worked in sales. (They divorced when he was 5, and his mother remarried four years later.)

At Quincy Senior High School (which he visits in the latest season of “Queer Eye”), he leapt over social norms to become the school’s first male cheerleader. Never mind the beer bottles thrown at him during games.

He wasn’t exactly popular, and students spread rumors about his friendship with a closeted boy from his swim class. Mr. Van Ness felt humiliated. “I was too fat, too femme, too loud and too unlovable,” he said.

His lack of self-esteem ran deep. As therapy would later reveal, the abuse he experienced as a young child planted the seed for other self-destructive behaviors. In his early teens, he spent hours in AOL chat rooms (this was the 1990s) and met up with older men for sex. One man, he recounts in the book, “turned whiter than Ann Coulter’s fan base” after learning he was underage.

He found other ways to fill the void, including binge eating junk food like doughnuts when his stepfather died (he gained 70 pounds in three months).

Eager to leave Quincy, he earned extra credit to skip senior year and attended the University of Arizona in Tucson. But during his first semester, he blew a monthly allowance of $ 200 from his mother on cocaine, which he started doing on weekends.

Instead of asking his mother for more money (he was too ashamed and reckless at the time), he advertised sex for money on Gay.com, a chat and personals site.

He flunked out of college his first year — he was 19 — and sulked home with his ponytail between his legs.

Unsure what to do with his life, he decided to take the skills honed from styling the hair of his Barbie dolls to the next level and enrolled in an 11-month beautician program at the Aveda Institute in Minneapolis, where his first clients included many Somali refugees.

After getting his certificate, he moved to Scottsdale, Ariz. (to be near his dying grandmother) and then to Los Angeles, where he supported himself as an assistant at a Sally Hershberger salon.

But his addiction to sex and drugs got worse. When he was in his early 20s, a couple he met on Grindr introduced him to smoking methamphetamine. He went to rehab twice and relapsed both times.

One day, when he was 25, he fainted in a salon while highlighting a client’s hair. The next day he went to Planned Parenthood to diagnose his flulike symptoms. He tested positive for H.I.V.

“That day was just as devastating as you would think it would be,” he writes.

He cleaned up his act; he still drinks and smokes marijuana but says he hasn’t done hard drugs in years. And, using money from a family trust, he started anew in Los Angeles.

Appropriately enough, his foray into entertainment began at the hair salon. During an appointment with his friend Erin Gibson, a comedian who worked for Funny or Die, the two came up with a parody series called “Gay of Thrones,” in which Mr. Van Ness and a guest comedian offer campy, gay-themed recaps of “Game of Thrones.”

The show premiered in 2013 and became a hit. (It has been nominated for three Creative Arts Emmys for short-form variety series). Soon, Mr. Van Ness was offered roles as a red-carpet commentator and as a host of other web series.

Then, in 2016, his manager called with news that would truly flip his hair: Netflix was holding auditions for a reboot of “Queer Eye.” It took many weeks, but Mr. Van Ness eventually won the producers over.

In the show’s four seasons, the “Queer Eye” cast has gone from fringe gay personalities to mainstream celebrities, with Mr. Van Ness as one of the series’s breakout stars.

In a recent episode set in Kansas City, Mo., he confronts the shame associated with traction alopecia, a form of hair loss that predominantly affects black women. It’s a topic rarely discussed on television, and even rarer by someone who is white.

On Twitter, Tressie McMillan Cottom, an author and professor of sociology at Virginia Commonwealth University, wrote: “Jonathan treating this sister with traction alopecia with love is more care than I can recall a regular black woman getting on TV ever.” (When he was shown that tweet, he burst into tears.)

Mr. Van Ness hopes to bring attention to what he calls “gorgeous beauty moments” like that with his memoir, especially misperceptions about being H.I.V. positive. He is healthy and now describes himself as an out-and-proud “member of the beautiful H.I.V.-positive community.”

“When ‘Queer Eye’ came out, it was really difficult because I was like, ‘Do I want to talk about my status?,” he said. “And then I was like, ‘The Trump administration has done everything they can do to have the stigmatization of the L.G.B.T. community thrive around me.’” He paused before adding, “I do feel the need to talk about this.”

Just as he about to take a bite of his eggs at the diner, Mr. Van Ness was interrupted once again. This time it was a boyish young man who poked his head in the window to profess his admiration.

After another “namaste,” which appears to be his shorthand for “kindly leave,” Mr. Van Ness resumed his thoughts. “These are all difficult subjects to talk about on a makeover show about hair and makeup,” he said. “That doesn’t mean ‘Queer Eye’ is less valid, but I want people to realize you’re never too broken to be fixed.” 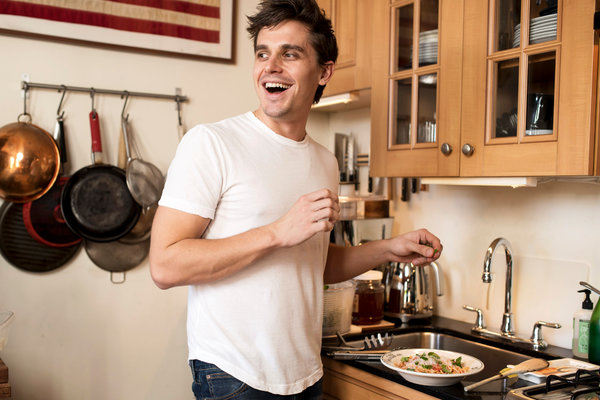 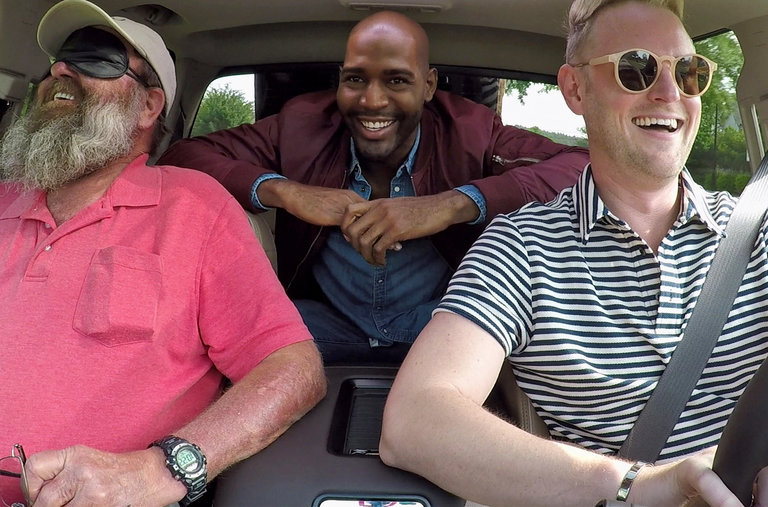 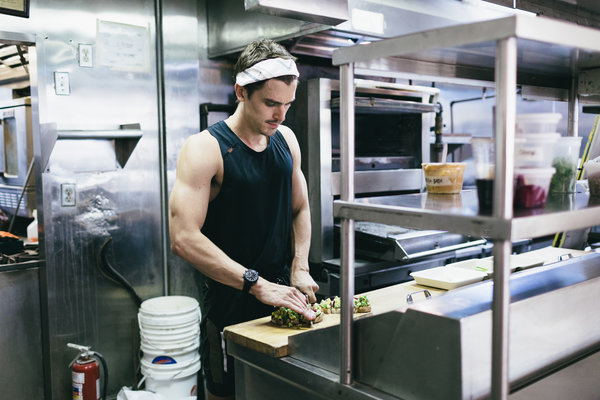