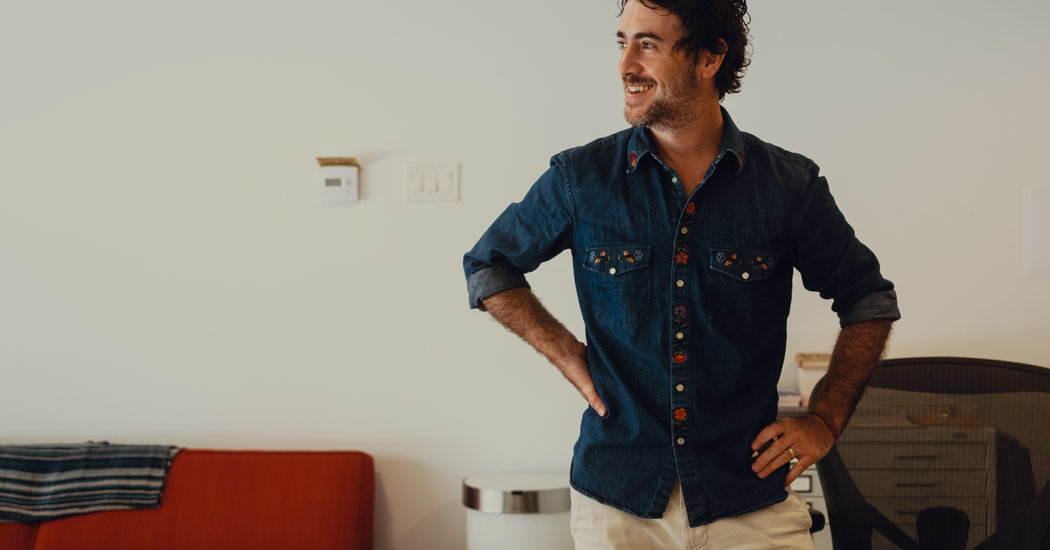 Times Insider explains who we are and what we do, and delivers behind-the-scenes insights into how our journalism comes together.

For nearly a decade, Brian Rea, an illustrator for The New York Times, has drawn the images that appear alongside the weekly Modern Love column — now also a television show — which is dedicated to stories across the spectrum of love.

Mr. Rea’s illustrations, which feature quiet yet colorful line work, can feel like a thread stitching the essays together into a single seemingly cohesive narrative — one linear story of love and loss being told through an all-knowing lens. Mr. Rea, who lives in Los Angeles with his family, discussed his process and how his illustrations fit into a larger narrative.

How do you create the illustrations for Modern Love?

Dan Jones, the editor of the column, sends me the essay about a week in advance. I’ll give it an initial read on a Friday night or Saturday. I sit on it and let it percolate. I’ll come back to it on Monday and give it a good hard read, and what I’m trying to do in that second read is look for visual cues and hammer down the tone of that piece. Sketching the final piece takes about a day.

You have such a strong and distinct look and voice when it comes to your illustrations. Do you ever feel as if the voice of your work is ever competing with the voice of an essay?

My work is pretty quiet, and that’s intentional, because, especially for something like Modern Love, I always look at the illustrations as being visual love notes rather than being big posters shouting an idea at the reader. Restraint is the best tool you have in your toolbox, and if I can just keep removing things from a piece until I’m down to the core of that story, that’s when I feel like I’ve done my job. If I can get empathy out of the reader, then I don’t need to do anything else. I want them to fall into it emotionally and connect with what the writer said.

Do you illustrate by hand, or is most of what you do done digitally?

Everything I do starts with drawing and painting. I’m a bit of a dinosaur that way. I tend to do all of the drawings by hand. None of it’s done digitally in terms of the beginning process. The finished work, though, is done digitally. I’ll scan swatches of color, I’ll scan the drawings, and it gives me a little bit of efficiency. Because if I were to just paint them by hand, it would take much longer to make those tweaks and those little fixes that need to be made.

What keeps you doing this job?

I think it’s the thing I love to do more than anything else.

You have mentioned that you use recurring characters in your illustrations. Can you tell me more about these characters?

I see them in a big Modern Love universe. All of these characters, they’re all connected in some way. Sometimes it’s their hairstyle, sometimes it’s the clothing. I’ve had friends’ dogs recurring in the pieces. I’ve had my son in there once or twice. In my mind, the most amazing thing would be to take them all home and make one big animated series out of them.

Do your own trials, tribulations and triumphs in love, in any of its forms, ever inspire your illustrations?

They must, right? It’d be hard to separate them. The thing about Modern Love that’s so special, and completely bizarre, is it’s this weird unicorn in the newspaper. Everything is news, news, news, and then you get to Modern Love, and it’s just totally something else. It’s a real departure from that. I feel like doing the essays, and reading these essays for countless years, it’s probably made me a better husband and a better father. It’s a column that really holds a mirror, whether you read it or illustrate it.

You were previously an art director for the Opinion section at The Times. How did your approach differ?

For Op-Ed, if you’re doing a piece about a political topic or economics, it requires a different metaphorical storytelling device and imaging.

When you’re doing Modern Love and dealing with so many heavy stories and topics, often the solutions are based on trying to evoke or elicit an emotional response from the audience.”

Have you ever considered submitting an essay to Modern Love?

I don’t feel like there’s a big need for me to share my story. My wife won’t be happy to hear me say that (we have a good story), but there are so many good love stories to draw from.

Follow the @ReaderCenter on Twitter for more coverage highlighting your perspectives and experiences and for insight into how we work.