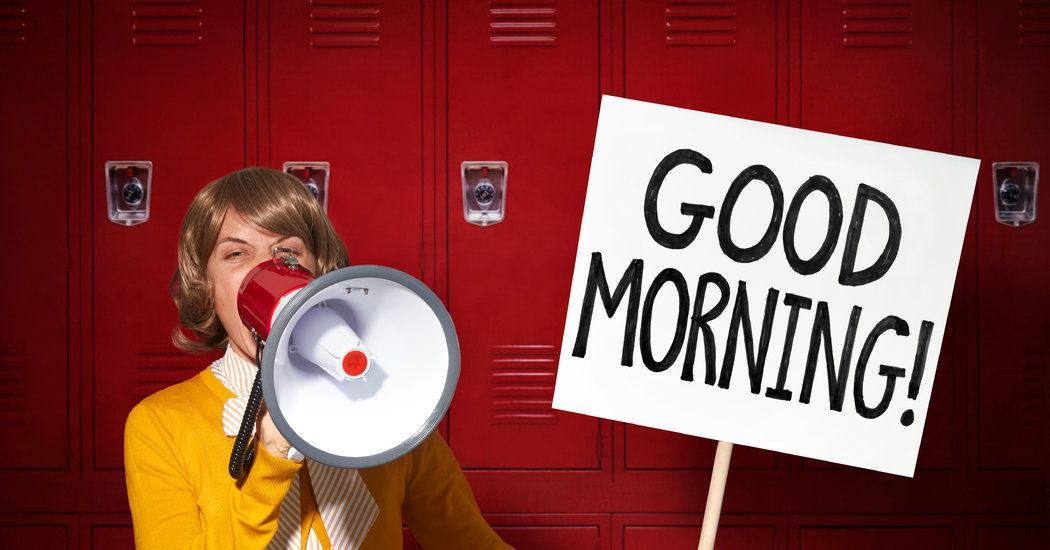 Send questions about the office, money, careers and work-life balance to workfriend@nytimes.com. Include your name and location, even if you want them withheld. Letters may be edited.

I work in a high school where two teachers receive a stipend for supervising the entrance at the beginning of the day. Both teachers sit behind a table facing the entrance, by which all teachers and students must pass, but they never say hello to the students or staff. If I say hello they sometimes respond, but other times nothing. I have stopped saying “good morning” but find it terribly uncomfortable to walk past in silence. Other times of day these same teachers try to engage in conversation, but I harbor resentment from the morning. Shouldn’t greeters say hello?

The single best thing about leaving high school is abandoning the requirement to be anywhere by 7:45 a.m. I’m trying to summon a memory from the start of any first-period class. All I can come up with are recollections of signing in late at the security desk, which suggests either that I was tardy every day (possible) or that my brain is unable to form lasting memories before 8 a.m. I don’t know what time your school starts, but it’s definitely too early. Your co-workers get there even earlier.

Yes, it would be nice if everyone trudging into school received a personal country club welcome. You are clearly passionate about this issue; consider arriving at work early to greet crowds the way they deserve, pro bono.

People other than United States ambassadors to Western European nations are generally not paid to relax and have fun, yet a portion of the school’s budget was allocated as compensation for arrival supervision. Perhaps this was the only way to ensure people would show up and do it. It would be grim to speculate about why administrators feel that dedicated staff members must monitor the ingress of every person on school property. (I imagine students would prefer to slip by unnoticed to conceal flagrant dress code violations.) You give no indication that the teachers are frequently absent or otherwise preoccupied. It sounds like they are ably performing their assigned task: “supervising the entrance.”

A few possible explanations for why they might not greet you: They are scanning the perimeter for interlopers. They are not early birds. They recall past attempts to engage you in conversation that found you standoffish, owing to your secret tendency to “harbor resentment from the morning.”

The best way to make a friend is to be a friend, and the best way to force someone to say hello to you is to make eye contact and offer a clear, bright “Hello!” every morning until you break them. Let’s be gentle with one another before 10 a.m.

I read your column online and always seem to draw a comparison to Hustler magazine’s Forum because so many of the letters seem contrived. Then I think about their content, and I realize the writers must be either extremely insecure or just plain indecisive. Doesn’t make me feel better, but reminds me I have just wasted a few minutes that I will never recover. We are in grave danger if any of them are allowed to vote or procreate.

The internet has brought a lot of good to the world, such as the highly revered Work Friend column, but it has also facilitated the spread of incorrect information and lackluster opinions on which even holders’ grasps are tenuous. Forum was a Penthouse feature. Please click here.

Our team had a meeting with another team requiring a screen share from my laptop. As the meeting ended and everyone “hung up,” my manager, who was unable to attend, messaged me to ask how it went. I was unaware that our messaging was not the private conversation I thought it was; other people were reading our messages because they hadn’t closed out their screens.

None of what we said was unprofessional or untrue, but a woman who can be difficult did a screenshot of the messages and sent it to my boss’s boss, who had been on the call. I am really upset about this invasion of privacy, lack of respect and questionable ethical judgment.

I want to address this situation, as I feel violated and wronged. This person needs to have consequences, in my opinion; she is a V.P. and should know better. I don’t know her well and will see her in person at a large-ish meeting in two weeks. I don’t really want to call her myself, and I feel like H.R. should do something, but all of this just furthers the friction, even though she’s bringing it on herself.

1) Shouldn’t this person have closed her screen and/or let me know that my screen was still open? 2) What the $ &@? Sending the screen to my boss’s boss — what could she hope to achieve with that?!

1) Yes, that is the professional, polite and kind thing to do, but not the most strategic, entertaining or delicious thing to do, which is why many people would not do it.

2) A good guess about what she hoped to achieve: everything from your worst nightmares — making you and your manager look careless, disagreeable, technologically inept, etc.

It certainly sounds like a lot of difficult people work in your office, but without my knowing your boss’s boss, it’s tough to determine how close your co-worker might have come to achieving her goal. That some people detest tattletales and that the leaked conversation does not sound explosive are points in your favor. I am curious who alerted you to the existence of the screenshot. If it was your boss’s boss, you have a powerful ally (good) who loves drama (chaotic).

As an ever-increasing amount of office communication takes place in digital environments offering the appearance but not guarantee of privacy for participants, it is crucial to shed the presumption that these conversations are secret. At a minimum, don’t send anything over a work platform — be it instant messenger, email or chat room — you wouldn’t feel comfortable hearing read aloud by opposing counsel. (I say this as someone with brief cameos in the internal chat transcripts of a former employer that were entered into evidence in a Florida court.) Even better: Don’t transmit anything you couldn’t say at a normal volume in a restaurant across the street from your office.

From the comprehensive way you enumerate your co-worker’s failures of judgment, and the resulting negative impacts on your emotions, I suspect you are experienced in the alchemy of transforming your complaints into others’ punishment. It is for your own office reputation that I say: This is not an H.R. issue. Your computer was not hacked.

The good news is, this will never happen to you again, because you will be paranoid about it for the rest of your life.

Caity Weaver is a writer for the Styles section and The New York Times Magazine. Write to her at workfriend@nytimes.com.