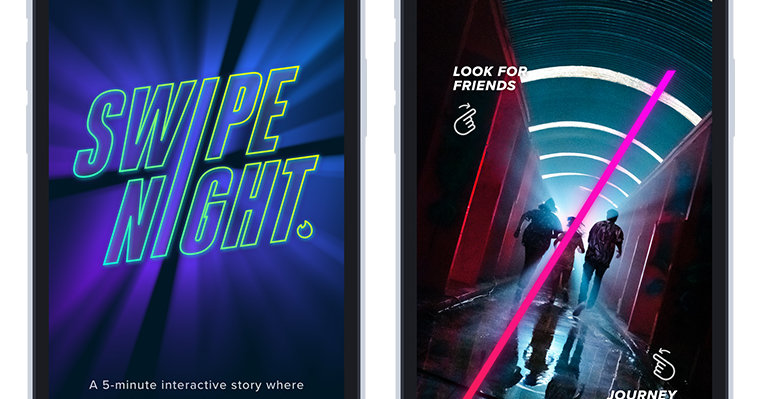 For all of their success, swipe-y dating apps like Tinder or Bumble face a problem once their users have matched: It’s hard to find things to discuss with total strangers. What exactly are you supposed to say in response to “👋🏼”?

In an effort to solve this, Tinder has created a scripted choose-your-own adventure series that it hopes will supply its young users with raw material for conversations on its platform. The goal is to counteract that chronic dating-app issue: conversations that die almost as soon as they begin.

The project, called SwipeNight, consists of four episodes. One will air each week on the Tinder app. In each episode, users who participate will be ushered through an apocalyptic scenario and prompted to make a series of choices, from the seemingly unimportant (how to best D.J. a party) to the critical (whose life to save). The show features a cast of young diverse actors and, like a video game, gives the user a first-person perspective on the action.

Participants will then show up in each other’s lists of potential matches. Some of the choices they made during the show will be visible on their profiles. That is when, the company hopes, a number of those people will swipe right on each other and talk about what they experienced.

Last year Tinder set up a team to survey hundreds of young people. This research helped the company see members of Generation Z as fundamentally different from older generations (and that includes millennials, the oldest of whom are nearly 40). Defining characteristics included Gen Z’s immense comfort on social platforms and immense discomfort with defining relationships, or even using words like “dating” and “flirting.”

SwipeNight also looks to take advantage of their facility with the raw material of pop culture.

“They speak in gifs, they react in emojis, they talk in stories,” said Elie Seidman, the chief executive of Tinder, of 18-to-25-year-olds, who already make up more than 50 percent of the app’s user base.

Tinder allows users little space to provide information about themselves on their profiles. That can lead to a particular shortage of subjects to discuss. On Tinder, Mr. Seidman said, approaching strangers is much easier than it is offline. “But you get to the next thing, and there’s no context,” he said. “What’s the context? ‘Oh, you’re also on Tinder.’ ‘Like, yeah, obviously.’”

Tinder has traditionally been viewed as a predate experience. SwipeNight looks to collapse some elements of a first date — the mutual experience of some diversion — into its platform.

The choice of day is no accident. Tinder has long seen a surge of user activity on Sundays. But Mr. Seidman said that SwipeNight was not an effort to compete with the traditional entertainment that dominates that night, like Sunday Night Football or HBO’s flagship shows.

A rough cut of the first episode of SwipeNight was reminiscent of J.J. Abrams’s 2008 movie, “Cloverfield.” The show was directed by Karena Evans, 23, best known for directing the Drake music videos “Nice for What” and “In My Feelings.” Her experience with music videos, which fuse art and marketing, as well as her age, made her a natural choice for the SwipeNight project.

“She came in with a very specific idea of what it looked like, how these characters should talk, what the experience should feel like, what the narrative is,” said Paul Boukadakis, the vice president of special initiatives at Tinder.

The company declined to say how much Ms. Evans was paid for the project. Variety reported that the SwipeNight production had a budget of more than $ 5 million. A Tinder spokeswoman said that figure was inaccurate, but would not say whether that meant it was low or high.

Mr. Seidman said the project had been “a major effort,” between the creation of the content and product development that had taken the better part of a year.

SwipeNight represents a significant gamble for Mr. Seidman, who has run Tinder for two years. He has overseen its growth as it has solidified its position as a leader in the dating app category, thanks to its thriving subscription business. (Mr. Seidman was previously the head of OKCupid.)

He said that he did not feel that his head was on the chopping block if SwipeNight were to fail, but there was of course some tension in waiting to see how it turned out.

“We want it to be great, of course, but we are kind of buoyed by the fact that at the end of it, you get to meet people and talk about what you did,” he said. “Hopefully what you’re talking about is not, ‘Oh, this was terrible.’”