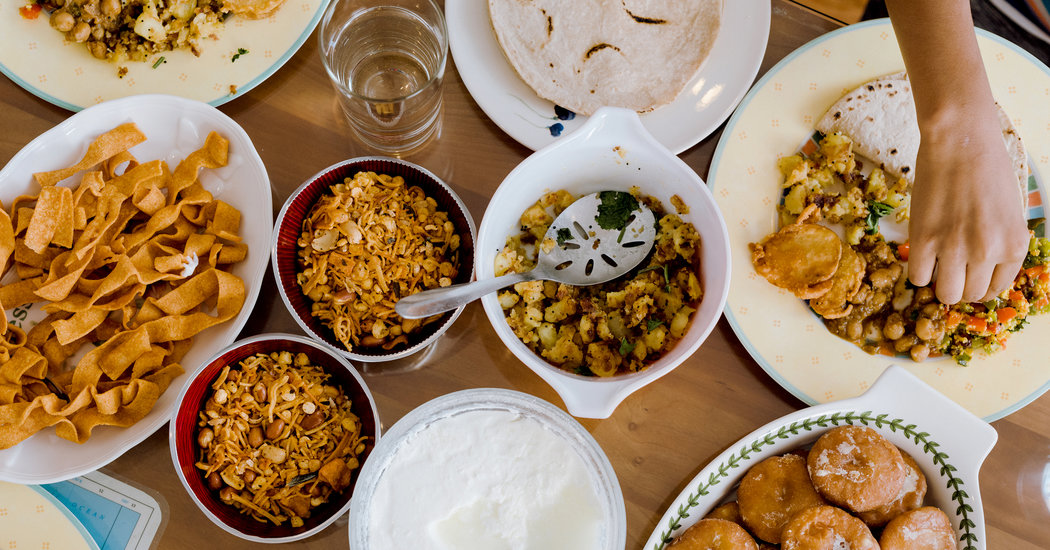 WASHINGTON — For Representative Pramila Jayapal, there was no better party during her childhood in Jakarta, Indonesia, than the one that took place on Diwali, the Indian festival of lights.

Jakarta didn’t have a large Indian population in the 1970s and ’80s, so the 100 or so people who lived in her area would meet for an epic feast at one of their houses. The place would be decked out with dozens of diyas, or decorative oil lamps, and statues of Lakshmi, the Hindu goddess of wealth.

“It was the most extravagant of celebrations,” said Ms. Jayapal, 54, with seemingly bottomless varieties of Indian dishes: spiced fritters called pakoras; fluffy idlis, a type of rice cake; and dosas stuffed with potatoes and served with a vibrant coconut chutney. An entire section of the table was devoted to desserts like ghee-soaked laddoos and payasam, rice pudding studded with raisins and cashews that her mother would make special for the holiday (which this year will be celebrated on Sunday).

In 2016, Ms. Jayapal, a Democrat from Washington State, became the first Indian-American woman elected to the House of Representatives, and she started attending the annual Diwali celebration staged on Capitol Hill by various local Indian organizations. The event, usually held in a government building, has an institutional feel. Decorations are minimal. A few speeches are given about the holiday’s significance. Small snacks are passed out.

“They don’t replicate the kind of joy and fun and meaning those early celebrations had,” she said, referring to Diwalis of her childhood.

Today there are four more House members who celebrate Diwali: Tulsi Gabbard of Hawaii, Raja Krishnamoorthi of Illinois, and Ami Bera and Ro Khanna of California. All are Democrats, one is a presidential candidate and all but one are of Indian heritage; Ms. Gabbard adopted Hinduism as a teenager.

Senator Kamala Harris of California, another Democrat of Indian descent and a presidential candidate, does not personally observe Diwali, but she has participated in Diwali celebrations in the past.

As this representation has grown, so has the awareness of the holiday — and of Indian cuisine and culture — within the echelons of government.

There’s some progress to be made: Just four years ago, when Ms. Jayapal was a state senator, she celebrated India’s Independence Day by bringing in samosas for the Republican and Democratic caucuses. She recalled that one member “came up to me and said, ‘Those things were delicious, but I thought you were bringing mimosas.’”

Diwali, which honors the triumph of good over evil, is not the only significant Indian holiday. But it does have the most name recognition in America. And even though it is technically a Hindu festival, it has become more of a cultural event.

“It’s a symbolic holiday that unites us as a diaspora,” said Mr. Krishnamoorthi, and that invites others to share and celebrate, often over food.

Barack Obama was the first president to celebrate Diwali in the White House, in 2009. (There were White House observances under President George W. Bush, but he didn’t attend.) The United States Postal Service introduced a Diwali stamp in 2016, in response to a congressional resolution introduced by Representative Carolyn B. Maloney, a Democrat from New York. President Trump has observed the holiday in the White House each year since taking office, though last year he left out Hindus in two tweets describing who observes Diwali.

Because Diwali is not a federal holiday in the United States, it’s sometimes hard for these members of Congress to take time off for celebrations. Mr. Bera, Ms. Jayapal, Mr. Khanna and Mr. Krishnamoorthi said they try to attend the small affair on the Hill, though Mr. Khanna could barely remember what happens during that event, as “there are so many receptions,” he said, and “nothing in Congress has that kind of color and life to it.”

In her home city, Seattle, Ms. Jayapal and her husband, Steve Williamson, typically go to a friend’s place for a Diwali potluck, sometimes with their child, Janak Preston, 22. Ms. Jayapal brings chana masala — her version of the stewed chickpea dish is adapted from a recipe by the cookbook author Madhur Jaffrey, with more cayenne and lemon juice.

Mr. Khanna, 43, celebrates with his family at his parents’ home in Bucks County, Pa., or with his in-laws in Cleveland. Staples of the meal include kadhi, a silky soup with turmeric, chickpea flour and yogurt; aloo gobi; some kind of paneer; and his favorite dish of all, chole bhatture, stretchy puffs of fried bread paired with stewed chickpeas.

“I am not a novelist like Jhumpa Lahiri that can make food come to life,” he said, struggling to describe what makes the dish so special. “But I just really enjoy the taste.”

Mr. Krishnamoorthi’s mother-in-law will have deep-fried Indian snacks like spiral-shaped murukku and savory wafers called thattai shipped to his house in Schaumburg, Ill., all the way from Chennai, India, for the holiday. “The kids love that stuff,” he said.

Ms. Gabbard said through a press official that she looked forward to this year’s festivities. Ms. Harris was unavailable for an interview.

Beyond Diwali, these lawmakers incorporate Indian food into their professional lives in other ways. Ms. Jayapal will invite freshman members over to her apartment in Washington to talk through issues over a meal of dishes like biryani and raita. Mr. Bera, also an avid cook, has hosted Indian food cook-offs to raise money for his re-election campaign.

In his Washington office, Mr. Krishnamoorthi displays a photograph of him and President Obama enjoying lemon rice, dal, potato sabzi and puri at Mr. Krishnamoorthi’s parents’ house in Peoria, Ill., in 2002, when he was working on Mr. Obama’s campaign for the United States Senate.

When Mr. Bera was elected to the House in 2012, he said in his acceptance speech that he hoped that within the next decade, there would be five Indian-Americans in Congress instead of one.

“It didn’t take us a decade, it took us four years,” he said in a recent interview. “Let’s keep it going.”

As for the Diwali celebration on Capitol Hill, Ms. Jayapal sees some potential for improvement. “Maybe next year,” she said, “I can organize a Diwali celebration here in Congress that is of the character that I would like to have.”

Recipes: Dishes to Celebrate the Festival of Lights