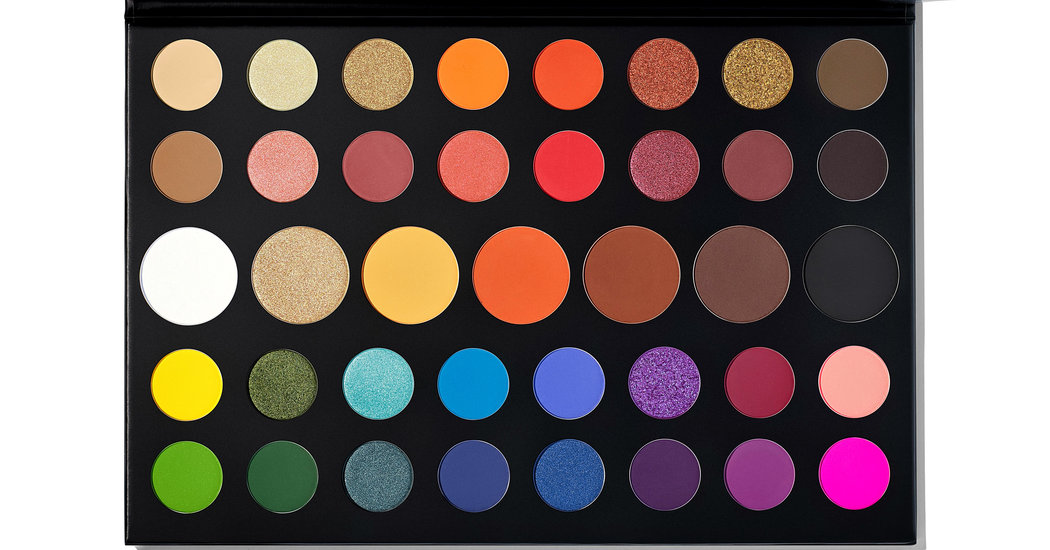 In early November, teenagers across America were sent into a frenzy over makeup.

Two popular YouTubers with tens of millions of followers between them had been hyping a beauty line collaboration for weeks, using documentary-style videos and social media to tout the collection’s crown jewel: a palette of 18 eye shadows for $ 52.

On the day of the drop, in school cafeterias and between class periods, fans flooded the websites where the line was sold. Over a million palettes were purchased in the span of 30 minutes, one of the creators announced in an Instagram Story. One website crashed for hours. The collection became a trending topic on Twitter. Everything sold out online.

In high schools, eye shadow palettes have become status symbols. Teenagers wait in long digital lines to buy them (weeding out the die-hards from the dispassionate) and then post about the experience on social media. That part is almost as important as actually making a purchase, because palettes are, fundamentally, a way for fans to support creators they love and signal which side they’re on in whatever the day’s beauty blogger feud happens to be.

For the influencers making them, palettes are big business; one successful release could mean a multimillion-dollar payout. (Eager to get a piece of the profit, some vendors sell knockoffs). But the palettes are symbolic, too — a sign that these internet personalities have been embraced by the cosmetics industry as professionals.

“If you don’t have a palette, are you even a beauty influencer?” said Bretman Rock, 21, a YouTube star who released his first palette last year. “I don’t think so.”

When Mr. Rock started posting makeup tutorials on YouTube four years ago, the idea of influencers collaborating with beauty brands was unheard-of, he said. That’s changed — in the last few years, influencer palettes have become a pillar of the multibillion-dollar cosmetics industry.

Industry experts often credit the cosmetics company Urban Decay with starting the palette craze. In 2010, the brand unveiled the Naked palette: 12 neutral-tone eye shadows packed together in a velvet brown case for $ 50. The product inspired several spinoffs, knockoffs and an influencer-studded “funeral” for its discontinuation in 2018. (Nicole Richie gave the eulogy.)

“After the Naked exploded and did so well, everyone came out with their own version of it and it kept growing,” said Larissa Jensen, a beauty industry analyst at the NPD Group, a market research firm. “Fast forward to the rise of the influencer. Everyone’s coming out with their own collections, and there’s a million palettes out there.”

Plenty have arrived just in time for the holiday shopping season. This fall, the YouTuber James Charles released a miniature version of the palette he created with the brand Morphe last year. His mentor turned nemesis, Tati Westbrook, recently debuted a palette from her own beauty brand, Tati Beauty. And Manny MUA, another beauty personality, just released a palette and brush set with Morphe, a company that often works with influencers.

Morphe approached Mr. Rock for his first influencer palette, a highlighter kit, when he was in high school. He balanced schoolwork with picking out shades and sending back samples.

“Before school at 8 a.m. in Hawaii, I was having corporate meetings, living a double life,” he said. “I’d get to school late and I literally would joke around with teachers like, ‘Oh sorry, I was making millions,’ and they would laugh but, like, I wasn’t kidding.”

I Pledge Allegiance to the Influencer

For the teenagers who covet these collaborations, it’s not just about makeup; it’s about fandom and loyalty. Rylee Prado, a 16-year-old in San Antonio, Tex., had devoured the behind-the-scenes series that the YouTubers Shane Dawson and Jeffree Star used to promote their Conspiracy beauty collaboration ahead of its release in November. At school, many of her classmates were talking about the $ 52 palette.

“Moms will get palettes for their kids,” Rylee said. “The rich kids will get it, too.” The price, she said, was too steep for her.

In a twist of fate, one of her classmates accidentally ordered two palettes; Rylee offered to split the cost of the second palette with a friend. “We’re switching off every week,” she said. “It’s like we’re co-parenting the palette.”

When the Conspiracy collection went live, Ally Vahling, a high school senior in Thornton, Colo., was sitting on a bus headed to a phys-ed class. Many of her classmates, she said, were hunched over their phones on the Jeffree Star Cosmetics website. She wasn’t worried, though; her mother was at home, also on the site. Of her friends, she was the only one to secure the palette.

Ally said that for many people her age, palettes are a way of declaring which influencer’s team you’re on. “All these beauty gurus are coming out with their own palettes, so you get them to support them and show your alliance in all the beauty blogger dramas,” she said.

Ashley Frazier, a high school senior in Chicago, has about 30 palettes. It’s not that she wears a lot of eye shadow, she said. “I collect them because it’s visually appealing and to support the influencers that cater to me,” she said.

She recently bought a palette that the YouTuber Jackie Aina created with Anastasia Beverly Hills, which was designed to complement dark skin. “For makeup in general, usually I have to go off of people that look like me for what I can buy,” Ashley said. “Because while there’s so much stuff, it’s still kind of limited to certain people and skin tones.”

Maria Gallo, a 16-year-old in Mansfield, Ohio, who works as a part-time makeup artist, estimated that she has about 50 palettes at home.

“Nowadays, if you’re wearing any color, someone will ask, ‘Oh, is that the James Charles palette?’” she said. She recalled classmates sneaking onto their phones under their desks last year trying to get their hands on it when it dropped.

“It’s Between Makeup and AirPods”

No one understands the power these palettes have over teenagers better than their parents — except maybe their teachers. Taylor LaRoue, 26, decided to use her ninth graders’ excitement about the Conspiracy collection as a classroom “incentive.”

When she was in high school, Ms. LaRoue herself was a fan of the line’s creators; she watched Mr. Dawson’s videos on YouTube and attended one of Jeffree Star’s concerts with her best friend. This year, on the day of the Conspiracy collection’s release, she and her friend lined up outside a Morphe store at 8:30 a.m. to buy the palette — something she had mentioned to a couple of her students in advance.

“I opened my door on Monday morning to, ‘Ms. LaRoue, did you get the Conspiracy palette?’” she said.

Word spread through the school that she had acquired the palette. She promised interested students they could see it if they let her get through her lesson with time to spare. (When it comes to teen catnip, she said, “it’s between makeup and AirPods.”)

“It was better than candy,” she said. “The girls were yelling at anyone who was trying to talk or interrupt.”

After she finally brought the palette out, there were “swarms” of students around the table, oohing and ahhing and taking photos, Ms. LaRoue said. “I felt like a museum piece.”

“I was the teacher who got the Conspiracy palette,” she said. “My kids thought I was the coolest thing since sliced bread.”