“You may attend school in America,” my mom regularly told me and my brothers when we were kids in our native San Diego, in the 1980s, “but when you come home, you’re in Iran.” Accordingly, we spoke Farsi, and attended Persian school on Saturdays to learn to read and write the language; we listened to classical Persian setar music; and celebrated Nowruz, the Persian New Year.

But certainly, the most powerful form of cultural immersion we experienced was culinary. My mom, who left Iran in 1976, steeped us in the smells, tastes and traditions of Persian cuisine. She spent hours upon hours each week traversing not just San Diego but also Orange County and Los Angeles, over 100 miles away, in search of the flavors that reminded her of Iran. She taught us that regardless of what was going on in the news, home is home, and nothing can transport you there like taste.

In Irvine, she found a bakery making fresh sangak, a giant dimpled flatbread named for the pebbles that line the oven floor on which the slabs of dough are baked. She’d line us all up there on weekend mornings so that each of us could order the three-per-person maximum — 12 pieces being enough to justify the hour-and-a-half-long drive for bread.

Systematically, she bought and tasted every brand of plain yogurt available at the grocery store, in search of the thickest, sourest one. She regularly packed us into our blue station wagon and drove across town to the international grocer, where she could have her choice of seven types of feta and buy fresh herbs by the pound rather than by the bunch.

The cornerstone of every Persian meal is rice, or polo. Each day, my mom would unzip a five-kilogram burlap sack of rice — always basmati — and portion out a cup per person into a large bowl, rinsing and soaking it for hours before giving it a brief boil. Then she’d begin the sorcery required to make tahdig, the crispy rice crust by which every Persian cook’s worth is measured.

Sometimes, she’d line the pot with lavash for a bread tahdig. On other occasions, when a special trip for bread wasn’t possible, she’d use a readily available flour tortilla, which yielded similarly glorious results. Either way, she’d divide and serve the rice and tahdig, encouraging us kids to delay gratification and resist gobbling down that gloriously crunchy crust first. I never could.

Persian cuisine is, above all, about balance — of tastes and flavors, textures and temperatures. In every meal, even on every plate, you’ll find both sweet and sour, soft and crunchy, cooked and raw, hot and cold. In the winter, we ate khoresh-e fesenjoon, a hearty, sweet-and-sour pomegranate and walnut stew to warm us from within. In the summer, we’d peel eggplant for khoresh-e bademjoon, a bright tomato and eggplant stew made distinctly tart with lemon juice and ghooreh, or unripe grapes.

No Persian meal is complete without an abundance of herbs. Every table is set with sabzi khordan, a basket of fresh herbs, radishes and scallions, which are eaten raw and by the handful, often tucked into a piece of fresh flatbread with a bite of feta, cucumber or walnuts. I’ve never quite grown accustomed to the practice and prefer the incredible, and multifaceted, ways herbs find their ways into cooked dishes. Kuku sabzi, a sort of frittata, is so densely packed with finely chopped sautéed herbs that the ingredient list reads like a practical joke.

Across Iran, but particularly in the northern regions, where my family is from, herbs are treated like a vegetable or main ingredient, rather than a garnish. In the Bay Area, where I now live, I can always spot an Iranian shopper’s grocery cart from afar — it’s the one piled high with bunches of parsley, cilantro, dill and mint.

Though I am both Iranian and a cook, I’m hardly an Iranian cook. I’m more of an Iranian eater, so when The Times asked me to choose the dishes that somehow encapsulate Persian cuisine to me — the essential recipes — I interviewed my mother, surveyed two dozen Iranian and Iranian-American cooks, and compared ingredient lists and techniques with just about every Persian cookbook published in the English language in the last 30 years.

Being an Iranian-American — honoring, representing and embodying two cultures that often feel at odds with one another — has always been a tightrope walk for me. This project has felt more significant and personal than any other recipe collection I’ve created.

I’ve sought, more than anything else, to share the taste of my own childhood, which is to say the taste of an Iranian kitchen in America. Even so, I had to break my own heart repeatedly when I chose to leave out many of my favorite dishes, like baghali polo (fava bean rice), tahchin (a savory saffron rice and yogurt cake with layered chicken or lamb) and khoresh-e beh (quince and lamb stew).

A word about terminology: For various personal, political and historical reasons, many Iranians in the West refer to themselves as Persian. “Persian” is both an ethnicity and a language, also known as Farsi, while “Iranian” is a nationality. Not all Persians and Persian-speakers are Iranian, and not all Iranians are Persian. If the distinction leaves you baffled, rest assured that you’re not alone — I’ve spent most of my life confused about it — and for our purposes here, feel free to think of the terms more or less interchangeably.

The task of distilling the entirety of a 2,000-year-old cuisine down to a handful of recipes is a futile one, so think of this list as an invitation to cook rather than a declaration of fact. It’s also an invitation to my childhood home, and to the Iran my mother built for her children out of rice, bread, cheese and herbs.

No dinner in an Iranian household is complete without polo, or rice. And no pot of polo is complete without tahdig, the crisp crust whose name means “bottom of the pot.” Tahdig is a highlight of Persian cuisine, and it can be made of rice, potatoes, lettuce or bread, as it is here. As she served me and my brothers dinner each night, my mom described her grandfather’s remarkable patience — he always let his tahdig soak in his khoresh, or stew, just long enough to soften, but not grow soggy. I’ve never been able to wait, and always gobble it down right away. (View this recipe in NYT Cooking.)

Kuku, which is like a Persian frittata, comes in many forms, but this one, packed to the brim with herbs, is my favorite. I particularly love kuku sabzi for the contrast between its dark, sweet crust and its fresh-tasting, vivid-green interior, which is also studded with tart barberries. Each bite is surprisingly flavorful and complex. Kuku is traditionally served with flatbread and a selection of crunchy and acidic condiments to balance the sweetness of the herbs; my favorites are fresh radishes, the chopped eggplant pickles called liteh and chunks of soft, salty feta. (View this recipe in NYT Cooking.)

There are three essential elements to this khoresh, or stew, which is often called Iran’s national dish. First, fenugreek leaves, either dried or fresh. The herb’s sweet, pungent flavor defines the taste of the stew, which simply isn’t the same without it. Likewise, Omani limes (also known as dried Persian limes) add a distinct aged sourness that is vital to the dish. Finally, the classic Persian technique of sautéing finely minced herbs until they are dark and dry lends character and complexity to the stew’s foundation. (View this recipe in NYT Cooking.)

Bademjoon, sometimes spelled bademjan, is a quintessential summer dish in Iran, and it was a childhood favorite of mine. Fresh lemon juice and ghooreh, or unripe grapes, lighten the stew and lend a particularly tart punch. Those sharp flavors contrast nicely with the soft, comforting texture of the eggplant and tomatoes, which grow silky as they cook down. This dish is particularly delicious with a piece of crunchy tahdig. (View this recipe in NYT Cooking.)

Fesenjoon, or fesenjan, hails from the verdant northern Iranian hills and coast, where pomegranate and walnut trees both grow. The sweet and sour flavors of the pomegranate juice and molasses, along with the silky texture the walnuts bring to the stew, make it one of the most elegant dishes in Persian cuisine. I had an aversion to fesenjoon when I was a child, but in my teenage years it became my favorite dish. I begged my mom to prepare it for me nonstop. (View this recipe in NYT Cooking.)

To me, ash reshteh signifies the arrival of spring. The soup is served during the festivities leading up to Nowruz, the Persian New Year, which usually falls on March 20. Two uniquely Persian ingredients define its flavor: Reshteh, or flat noodles, are starchier and saltier than their Italian counterparts, and as they cook, the starch they release thickens the soup. Kashk, a form of dried, drained yogurt or whey, is saltier and more sour than Greek yogurt or sour cream. More like feta than yogurt, kashk gives ash its distinct, satisfying flavor. Look for both items at a Middle Eastern grocer. (View this recipe in NYT Cooking.)

Iran’s most beloved and ubiquitous peasant dish, abgoosht (which means “meat water”) is made with inexpensive, bony cuts of meat, which take a back seat to the broth and the sheer ceremony involved in serving it all. When I was little, my aunts and uncles looked forward to the one or two times a year my mother made abgoosht, and then everyone would fight over who’d get to suck the marrow from the bones. The dish is simple to prepare, so turn it into an occasion for a gathering and set your table with piles of warm flatbread, pickles and fresh herbs to accompany the broth and meat paste. (View this recipe in NYT Cooking.)

Named for the city in southwestern Iran, salad-e Shirazi is found on practically every Iranian table at practically every meal. Think of it as an herbier, juicier, more tart version of Greek salad, Israeli salad or Indian kachumber, and eat it alongside any rice dish or on its own. In Iran, dining companions usually fight over the leftover juice at the end of a meal. If you’re lucky enough to win the battle, tip the salad bowl to your mouth and slurp the salty, tangy juice that remains. (View this recipe in NYT Cooking.)

Yogurt, both plain and with cucumbers, is a staple of Iranian tables — the thicker and sourer, the better. As a kid, I used yogurt not only to balance sweetness and richness, but also to cool down food that was too hot to eat. Mast-o khiar is an everyday side, and one of my favorites. Dice, rather than grate, the cucumbers to keep them from getting watery, and don’t skip the dried herbs, which add dimension to the fresh herbs. Raisins, walnuts and rose petals elevate this version of the dish, adding a host of different flavors and textures. I love this one so much that I sometimes eat it on its own. (View this recipe in NYT Cooking.)

Faloodeh is an ancient Persian dessert, a sort of granita threaded with rice noodles and spiked with rose water and lime. It’s incredibly refreshing and the ideal end to a rich meal filled with complex flavors. In Iran, most ice cream shops sell just two items: traditional saffron ice cream and faloodeh, which is typically topped with bottled lime juice that tastes mostly of citric acid. Faloodeh has been my favorite since childhood, but now I prefer it with the juice of freshly squeezed limes. (View this recipe in NYT Cooking.)

Save these essentials to your NYT Cooking recipe box. 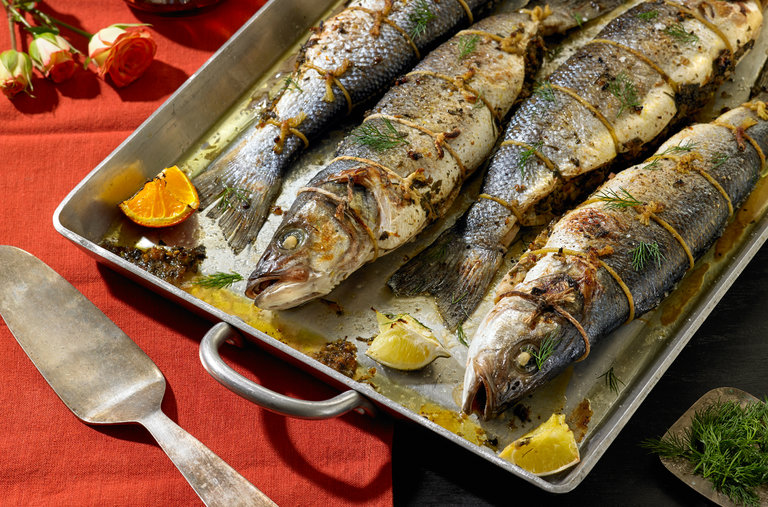 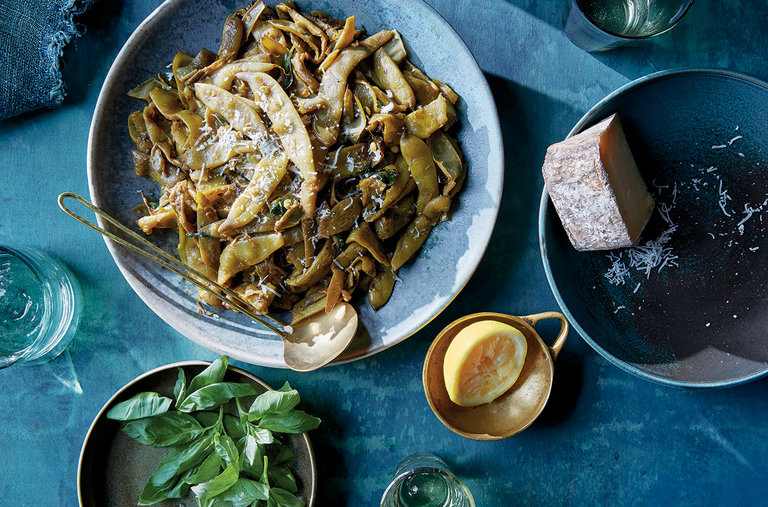 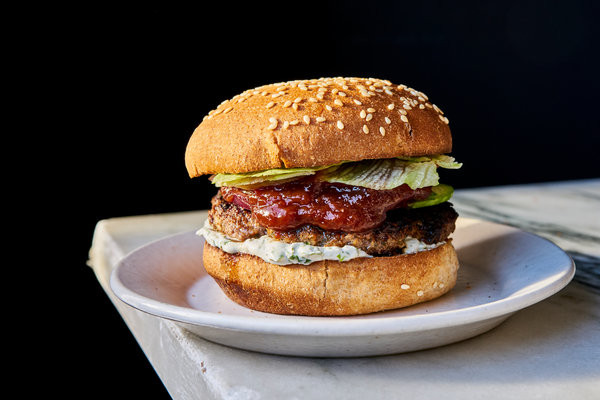