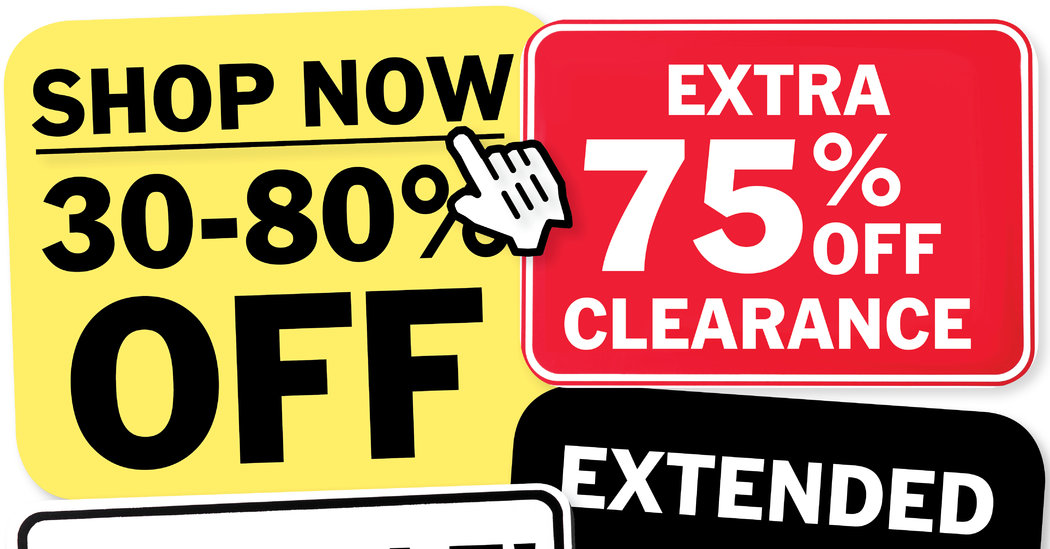 Every day, since late last week, the emails have been landing in my inbox. “New Sale Markdowns!” “Enjoy an additional 20% off!” “Flash 40% Off Sale!”

They are discomfiting and tempting, catnip to boredom and cabin fever. I’d rather look longingly at clothes I am no longer wearing, imagining a time when they are once again a part of my life (parties! work events! restaurants!) than face reality (stories of trauma, hospital shortages, businesses on the brink of bankruptcy).

I’d rather consider the allure of a fleece and silk knit — so much cheaper than normal! — and how they make me feel swaddled and safe (maybe they’re worth it?) than consider the stock market plunges and the fact I probably should be saving everything I can right now.

Yet shopping during a pandemic seems just the other side of wrong.

There are people who are terribly sick and dying because of the new coronavirus. People losing family members. People losing jobs. Shopping is so … self-indulgent. So unnecessary. So, as one reader wrote to me, “shameful.”

Maybe. But it is also an essential part of our economy; retail an enormous source of employment and creative expression. In some ways, the state of shopping is a sign of the times.

When you see “25 percent off,” instead of seeing “DEAL,” you should actually see “WARNING.”

It’s easy to lose track of where we are on the calendar when we are cooped up and weekends bleed into workdays, day into night, but we all know this is not sale time.

Latest Updates: Coronavirus Impact on Life in the U.S.

This should be peak new merch time. This should be the time of year when, as Michael Kors once fantasized, sales assistants call their favorite clients and crow, “New stuff is here!” And because the magnolias are blooming, and everyone is feeling just a little tired of their winter wardrobe, it would be the time we run off to the stores to shop.

Except it is, because this is crisis time. The stores are closed. Any retailers with an online presence are desperate to move inventory so that they are not stuck with out-of-season stock no one will want in two months when — if — the curve flattens and the doors reopen. And because online sales are the only source of revenue they have to keep their employees paid and their business afloat.

The last time there was a retail situation like this — and it was not really like this but may be the only comparable time — was after 9/11, when life in New York ground to a halt, and shopping did, too.

Then, department stores, desperate to get people back into spending mode and make their holiday numbers (or anything that could be considered a number), began to put all of their stock on sale in November instead of after Christmas as usual.

In order to stay competitive, brands with their own stores had to drop their prices, too. It started a race to the bottom. And it set a precedent that stores and designers still bemoan all these years later.

We’re in the same dangerous place now. The big department stores and online sites have started selling new products at 20 percent off, marked down as soon as they arrive. They are also sending products back to designers without payment, refusing to accept new stock.

Designers with their own sites are dropping prices to keep up.

And yet, as Sacha Rose, the chief executive of the British pajama brand Derek Rose, wrote in a recent email to clients, “Our online business is keeping us alive right now.”

They are not the only ones. Any small designer with a direct-to-consumer digital platform is clinging to it with their fingernails.

After 9/11, George W. Bush urged everyone to go shopping. At first it seemed silly. But what he was really saying was: Redistribute the wealth. Get the economy going again.

Shopping now is as much a moral as a consumer question. Where you spend your money matters. Before you buy, think: What is this about? It could be about helping save a generation of small designers and independent businesses.

Buying directly from a designer, as opposed to through a big multibrand chain or behemoth, means the profit (if any) goes directly to the designer, and their employees. Buying from an independent multibrand boutique is a way to keep this part of the ecosystem alive. Stand-alone stores with a singular point of view are often the key to finding and nurturing new talent.

I am not saying forsake the department stores. They have thousands of employees, who need to be paid. They also have a bigger cushion of liquidity. The luxury groups are in an even stronger position. And Amazon is experiencing a boom time.

But I am saying, consider the provenance and make an informed choice. That work-from-home loungewear that is being dangled so temptingly, so surprisingly affordably, before your screen-weary eyes? Those sweats and sneakers? That potholder?They represent labor and ideas, not just stuff.

Sometimes a fleece is only a fleece. And sometimes it can be a creative rescue line, and a bet on the future.