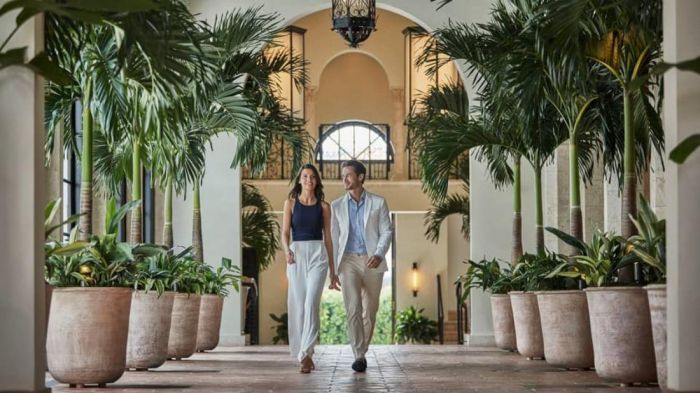 For most, the image of Miami is of its glitzy South Beach night-life, the exotic Latin culture, or the toned and oiled bodies lazing about on beaches perfecting their tans. Greater Miami is so much more than that and along Miami’s coastline, far removed from the hustle and bustle of South Beach, is the calmer and more mature town of Surfside where you’ll find its icon of Miami’s golden era, the suave and sophisticated Four Seasons Hotel at the Surf Club. 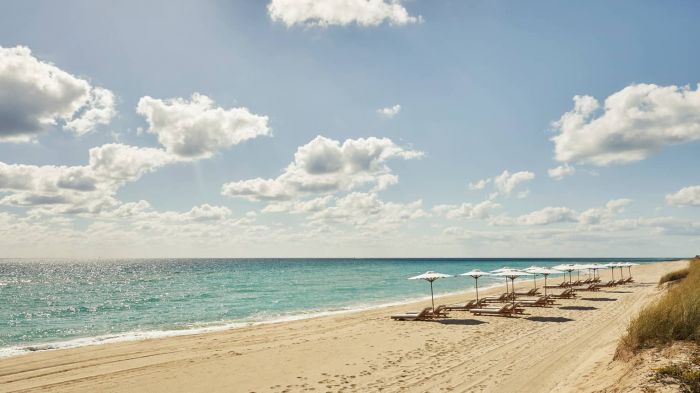 The hotel has an undeniable gravitas that is palatable before your first step inside.  The history of the Surf Club begins as a hedonistic playground of the rich and famous ever since it opened its doors in the 1930s. In that  yesteryear, the private members only Surf Club hosted business tycoons and matinee idols such as Elizabeth Taylor, Frank Sinatra, Dean Martin and Winston Churchill. The Surf Club was America’s most coveted winter club and in fact was where Frank Sinatra and Ava Gardner honeymooned.  Prohibition did not interfere with this crowd enjoying the high life as rum runners from Cuba and the Bahamas ensured that the libations flowed late into the night for their over the top galas. 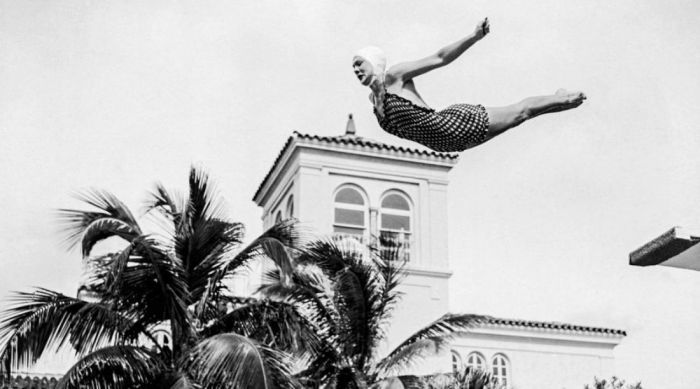 That essence of glamour, opulence and style are as undeniable today as they were almost 100 years ago. The Four Seasons Surf Club has reimagined the Miami heyday of the past and created a new haven for today’s beau monde. Three gleaming glass and mirror buildings rise 12 stories with completely modern, sleek and sophisticated interiors throughout and in the 77 exquisite accommodations and the residential tower.  The grandiose indoors are remind of a sophisticated hacienda with red terracotta floors, cream colored walls with leafy green plants to give that true tropical aesthetic. The heart and soul of the Surf Club remains the grand ball room with an updated new and improved version of its former self.  High society guests in designer beach chic attire strut along the Peacock Alley as the Hollywood’s stars did years ago. This storied hallway leads from the entrance to the outdoor area. Adorning the walls are black and white photos of some of the famous stars of yesterday such as Douglas Fairbanks Jr., Gary Cooper, Henry Ford and John Harvey Kellogg. 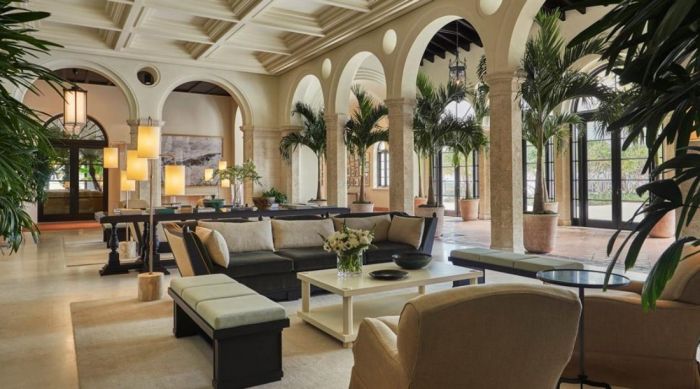 The Four Seasons offers the complete resort experience with 900 feet of white sand beachfront, three pools, a 1500 square foot spa, and Le Seine, which has quickly become known as one of Miami’s the top dining experiences. Not to mention an endless list of luxuries and amenities as well as the Four Season’s legendary service. The location is also ideal being a short distance from the tony designer shops of Bal Harbour and a short uber ride away from the action of South Beach. 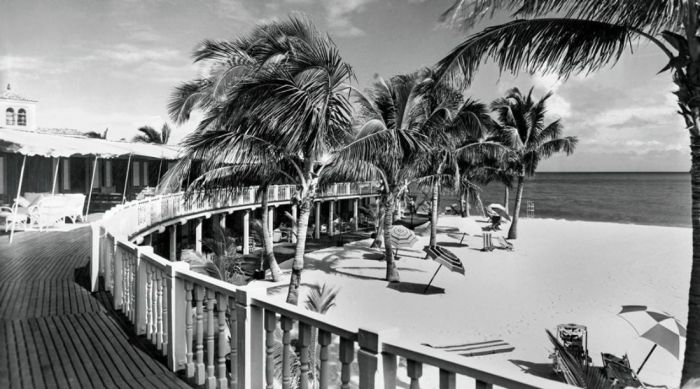 The history of the Surf Club begins during the depression when tire magnate Harvey Firestone was sailing along the coast and spotted a stunning stretch of golden beach. He envisioned an exclusive members only club where he could throw lavish soirees for his cronies away from the prying eyes and flashing bulbs of the paparazzi. 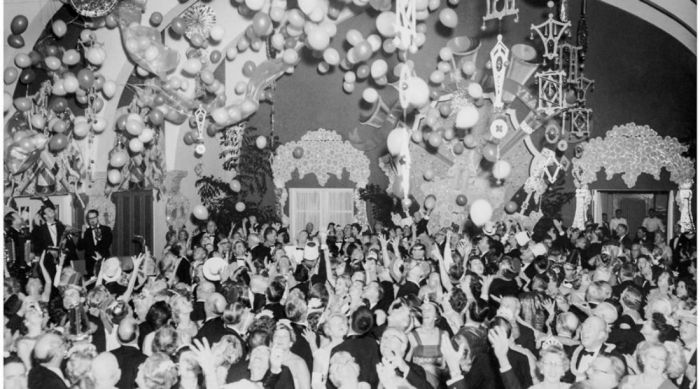 A short time later the Surf Club opened and immediately drew the well-to-do, the Hollywood in-crowd  as well as a cast of colorful characters. Nights were filled with elaborate soirees while  days were filled ocean swims and lazing on the beach. It was also the birth of Cabana Culture where the privileged would retreat to their private cabana, relax on chaise lounges under umbrellas, have a drink and to be catered to with flawless service. 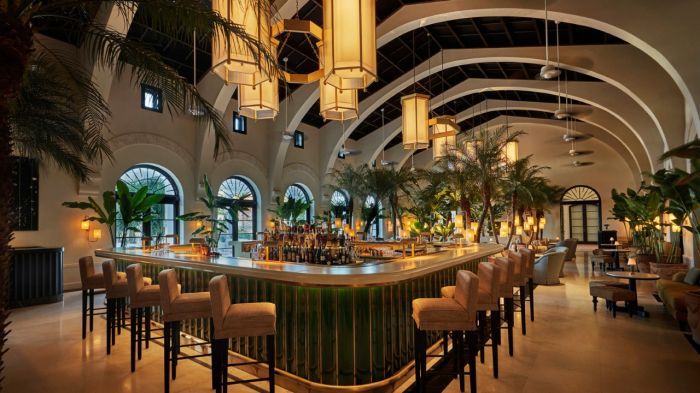 Fast forward almost 100 years and the Surf Club has been resurrected as one of the world top resorts by purveyors of luxury such as Travel and Leisure and Conde Nast Traveler. The accolades are well-deserved as the all-star team of the Four Seasons along with architect Richard Meier’s and  designer Joseph Dirand reimagined the club’s past glory to created something completely spectacular and modern without losing the DNA of the Surf Club’s past.  Inside you’ll find a minimalist and sultry interior that reflects a hint of the Art Deco of yesteryear yet are completely contemporary and Mediterranean chic. 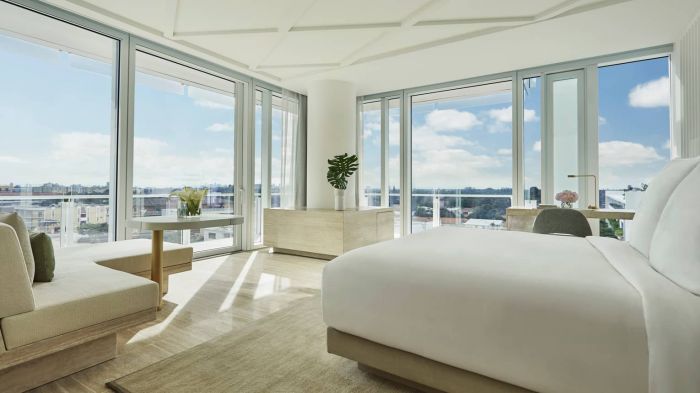 The interiors design mastery continues into the 77 guest rooms designed by lauded interior design virtuoso Joseph Dirand. The décor is sophisticated with a color palate of  cream, sand tone and ocean hues with a minimalist design to force the attention on the focal point of the experience which is the incredible outdoor views beyond.  Guest rooms are awash with natural light from the floor to ceiling windows with white scalloped bedroom walls, rattan paneled hallways and  sandstone hued Italian marble floors that are cool to the touch on bare feet. 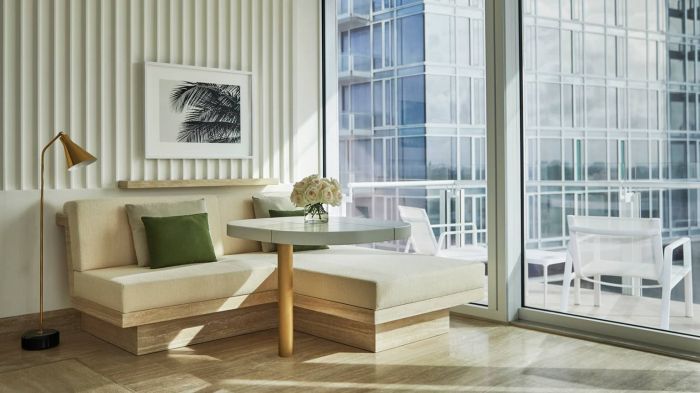 The features of the room are high tech with an Ipad that controls everything from the lights, electronic curtains, the air temp,  60’ smart television and can even order  room service. The rooms offer a plush king-sized bed with a comfy daybed and table and a full minibar area. The white marble bathrooms are spacious in size with a room-sized walk-in rain shower.  The expansive balconies offer views of the cerulean seas with ships passing in the distance as beach combers stroll up the beach or of the bay and the Miami city skyline in the distance. 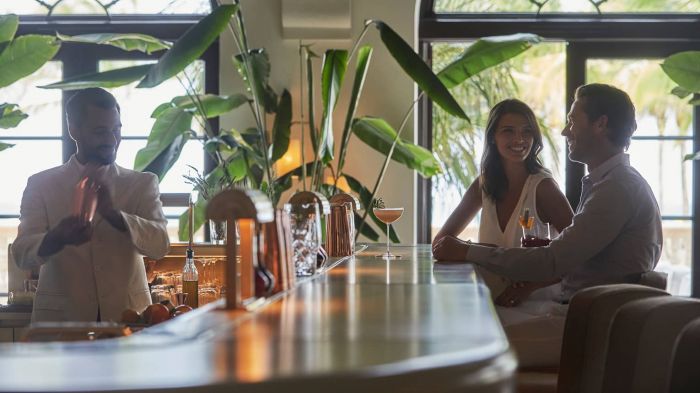 The dining experience offered at the Four Seasons Surf Club is exquisite. The former ballroom has been transformed into a movie set like lounge and champagne bar with two story high ceilings,  twirling fans, and lush palm trees add greenery to the sultry space. Behind the long emerald colored bar nattily dressed bar staff mixing up cocktails for the well-dressed clientele who sashay up for a signature cocktail or glass of champagne. 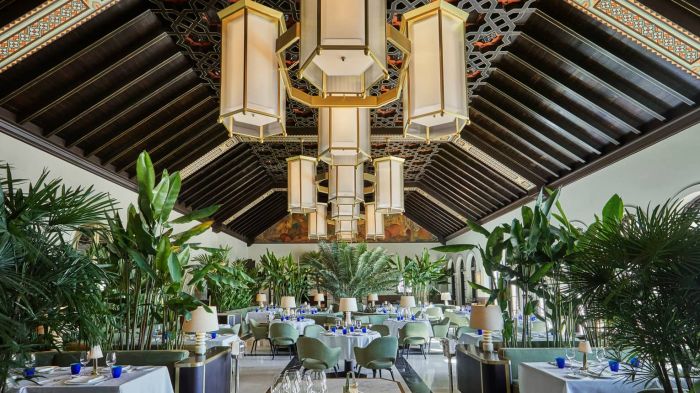 Beyond the lounge and bar is Le Sirenuse Miami which is the  sister restaurant to the Michelin-starred La Sponda in Positano. Le Sirenuse instantly became one of the hottest tables in the Miami culinary scene where guest palates were whisked away to the Amalfi coast for authentic Neapolitan fare such as  caprese ravioli, housemade pastas, fresh mozzarella flown in from Italy,  or the to-die-for truffle-tasting menu. 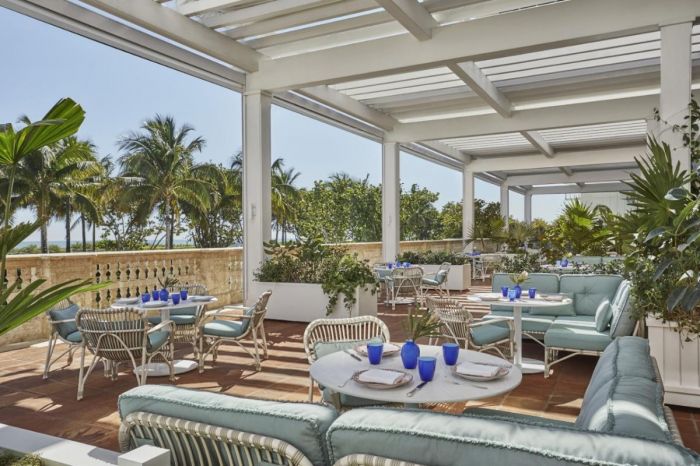 Outdoors the setting is cool yet casual on the terrace that reminds one of a bistro on the Italian Riviera. MARE by Le Sirenuse is the restaurant serving sumptuous Mediterranean and Italian food and the décor is comfortable on rattan furniture and dining on colorful tableware handmade in Italy. Guests dine on antipasti sul mare with Mediterranean octopus and Sicilian red shrimp while for the main, not to be missed is the Dal Mare which is a whole roasted fish.  The dining experience is exquisite and made for long lunches and dinners with a bottle of rose while overlooking the pool scene or the swaying palm trees and ocean beyond. 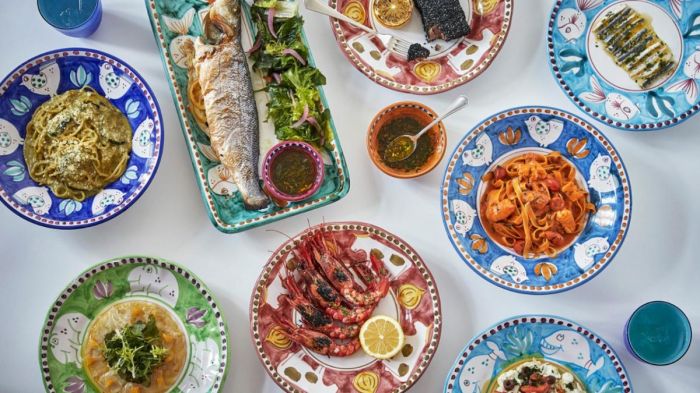 The Four Seasons at Surfside offers so much more beyond their outstanding accommodations and dining experiences. The resort offers 900 feet of pristine white-sand beach as well as three sparkling pools. Guests laze about at their beach club on rows of chaise lounges under white canvas umbrellas as staff dash about bringing cool a cool drink or snack. Others opt for the pool scene with a pool for adults, one for families and another dedicated to its cabana guests. 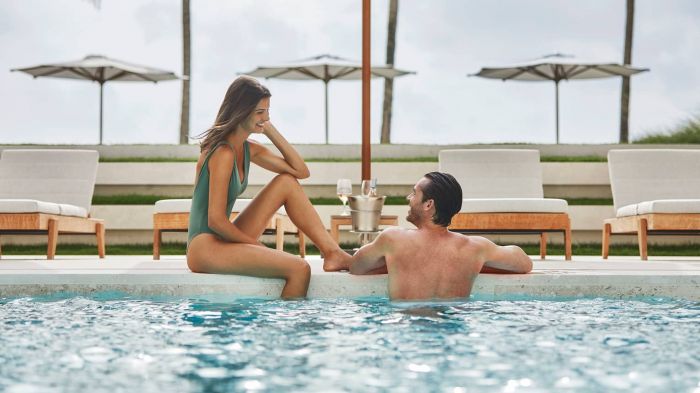 The ultimate way to experience life on the American Riviera is with your own cabana. The Cabana Culture of the 30s, 40s and 50s was an indulgent way to enjoy the beach. Well-to-do travelers didn’t go to the beach and then go home. They made a day of it with their own cabana with meals, time in the sun, the pool, on the beach then back to the cabana to chill out, cool off or have a drink. The Four Seasons at the Surf Club has revived that experience the Cabana Culture and offers 40 cabanas for guests and visitors to rent for the day that includes exclusive poolside chaise lounges and a comfy air conditioned  room with toilet and shower, and tropical rattan furniture and terrazzo floors. It also comes with a Cabana Concierge to take care of guests needs from cocktail service or to serve lunch and snacks. It’s really the ultimate way to spend the day by the pool and beach in Miami. 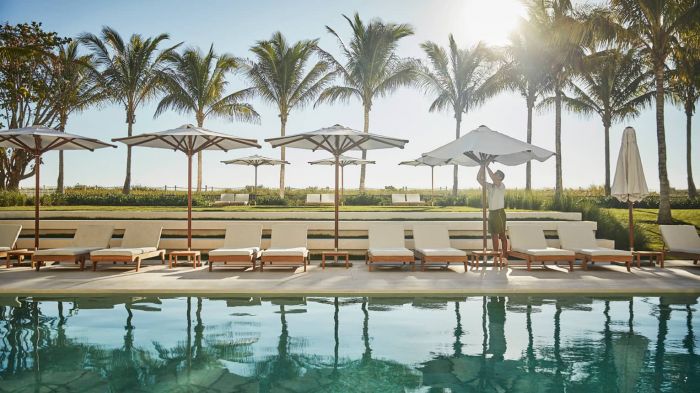 Beyond the beach and pool scene there’s so much to do on the property. The Four Seasons at the Surf Club offers a 1500 sq ft spa with the latest spa equipment and treatments as well as  a state of the artwork out facility. The location of the Four Seasons Surf Club is ideal as well and just a short distance from South Florida’s most posh shopping experience at the shops at Bal Harbour. South Beach and all of what is has to offer is a short distance away as well for a taste of its manic pace or for a night out in its club scene. 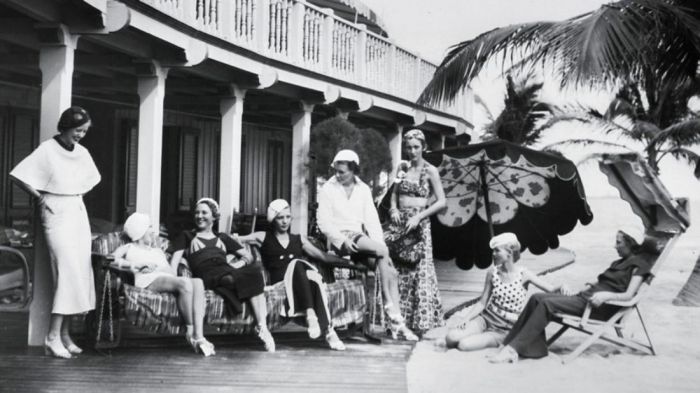 The Four Seasons Hotel at the Surf Club honors the legacy of its auspicious beginnings with a glamourous resort that offers the sophisticated traveler the best of the American Rivera.