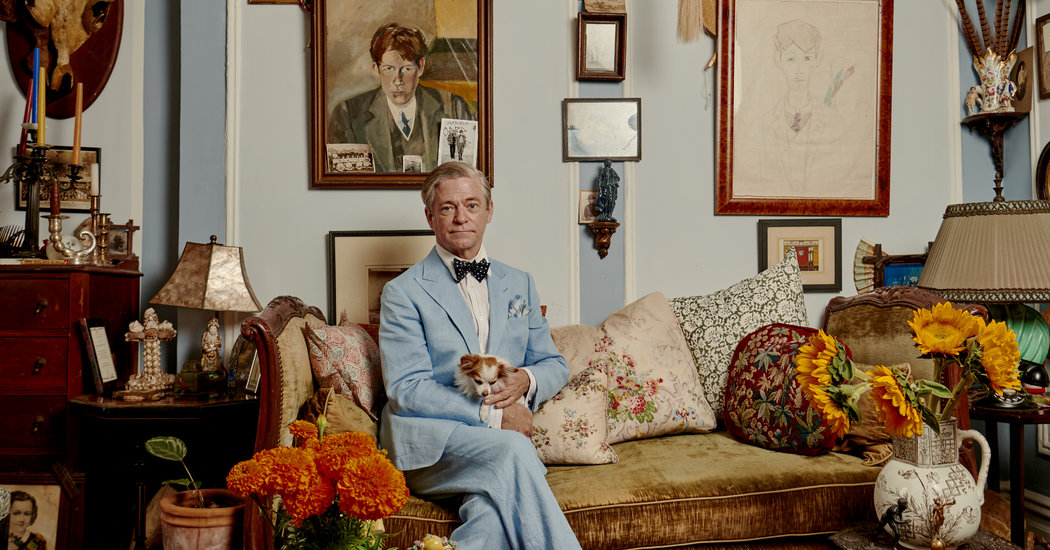 Once in the late 1970s, somebody insulted David McDermott’s mother at a party, so he went to Tiffany & Company and had a note engraved: “Mr. David Walter McDermott is pleased to announce the elimination of _______ from his guest list.”

The note, which was mailed out to the offender’s friends, now hangs on the wall of Peter McGough’s apartment in Greenwich Village. “Now, that’s pretty brilliant, to insult someone at such a high level,” he said, laughing at the memory.

But it is now Mr. McGough’s turn to be disinvited.

Half of the Victorian-inspired art duo McDermott & McGough, Mr. McGough has written a memoir about his partnership with Mr. McDermott, “I’ve Seen the Future and I’m Not Going,” in which he recounts their bizarre journey as time-traveling artists known as much for their retro lifestyle as for their pseudo-historical art.

They dressed in Edwardian clothes, drove a 1913 Model-T Ford and eschewed modern conveniences. As lovers, they shared an apartment on Avenue C that lacked a telephone, television or electric lights.

But they have not had a cordial conversation since last spring, which not only makes it awkward for Mr. McGough to promote his new book, but also practically impossible for him to finish a series of drawings based on their paintings from the 1980s.

“He’s very angry with me,” Mr. McGough said, in his walk-up apartment stuffed with artwork and bric-a-brac. “We fight about money, and he blames me for a lot.”

Mr. McDermott is said to be living in Ireland, having left the United States after the Internal Revenue Service seized the couple’s upstate house and other assets because the men didn’t pay income tax (he later renounced his United States citizenship).

As the more doctrinaire of the two, Mr. McDermott never joined the digital age. He has no smartphone or email, Mr. McGough said, and it’s not clear if he has even heard of Facebook and Twitter.

Contacting him is not quite as antiquated as sending a messenger on horseback, but close. Mr. McGough has to first send a text message to a man named James, a friend of Mr. McDermott’s in Ireland. If James happens to be in Mr. McDermott’s presence, he passes on the message, at which point Mr. McDermott may or may not agree to speak.

If Mr. McDermott is not in the room, it’s unclear if the message is ever conveyed. “He’s been fighting with me for a year,” Mr. McGough said. A recent attempt at détente was met with silence. “He didn’t want to talk to me. He said he’s not in the mood.”

Instead, Mr. McGough received a letter from Mr. McDermott, sealed in black wax, with the lyrics to the old song “Thanks for the Memory.”

That certainly would not be their most epic fight. Their roller-coaster partnership began in 1980, shortly after Mr. McGough, then 21, moved to New York City from a suburb of Syracuse, N.Y., seeking glamour and excitement.

One night, while attending a New Wave Vaudeville show at Irving Plaza, he met Mr. McDermott, who was 27 and a downtown club performer. A few weeks later, he went to a dinner party at Mr. McDermott’s apartment on Avenue B and became fascinated with his 1920s-era lifestyle.

“He is incredible how his brain works — that’s what fascinated me,” Mr. McGough said. “I found most people were nice and fun, but it never went anywhere. But with him, it went someplace.”

The two became inseparable, not only as lovers, but also as artists who collaborated on paintings, photographs, films and sculpture. Mr. McDermott brought time and history to their work, and Mr. McGough brought homoeroticism and sexual politics.

“A Friend of Dorothy,” perhaps their best-known painting, features slurs like “queer” and “mary” written in antique typeface on a sunny yellow background.

The men spent their 1980s in downtown Manhattan dancing at the Mudd Club, attending openings at Fun Gallery, dining with the Schnabels at Indochine. And as their art career took off, they attracted people into their fantasy world, a candlelit “Barry Lyndon” on the bombed-out Lower East Side.

Their 18th-century house in upstate New York had a hand pump for water, a hearth for cooking and tin tubs for laundry.

When they dropped by Andy Warhol’s Factory wearing top hats and dress shirts with detachable collars, the receptionist would announce, “Those old-fashioned people are here again.”

“It was this mania for fun,” said John Patrick Fleming, a fashion designer who has known both men since their days partying at Danceteria. “Lots of important, successful people got lured into the McDermott and McGough fun train. One time, they had Bianca Jagger upstairs, wooing her with vegetarian food.”

In the book, Mr. McGough, who is more compromising in temperament, recounts how Mr. McDermott fought with gallery owners, alienated their friends and burned though a fortune to build his antiquated world.

There was the 1930 Graham-Paige automobile and the Model T; the $ 7,500 monthly rent on a Brooklyn studio in a former bank, where the duo once hosted a costume party inspired by Louis Comfort Tiffany’s Egyptian Fete of 1913; the team of assistants; the rooms of period antiques; the construction of a $ 50,000 stone wall at their circa 1790 house in Oak Hill, N.Y.

When Mr. McDermott became enamored with a young man that Mr. McGough calls “Bastian” in the book, the pair moved him into Oak Hill and made him a living doll. They bought Bastian two Morgan horses, sent him to train as a carriage driver at a Virginia farm and dressed him in old-fashioned riding gear.

Although Mr. McDermott and Mr. McGough ended their romance around 1985 (Mr. McGough said that Mr. McDermott had multiple affairs that precipitated the breakup), they continued making art for decades after.

Their works were included in three Whitney Biennials, and were exhibited by prestigious galleries including Cheim & Read in New York, Galerie Jérôme de Noirmont in Paris and Bruno Bischofberger in Zurich.

But in 1992, the I.R.S. showed up at their studio. The couple owed six figures in back taxes, having ignored all their bills. The government seized the Oak Hill property and auctioned off its contents. The Brooklyn studio was soon gone, as were the Model T and Graham-Paige touring car.

Mr. McDermott was devastated by the losses and moved to Ireland in 1994. Mr. McGough joined him, but he missed New York and his friends, and moved back to Manhattan in 1998. (Mr. McGough was also suffering from AIDS, which he learned he had in 1997.)

By the mid-2000s, McDermott & McGough were again riding high. But earlier mistakes were repeated, and the couple burned through more money. Mr. McDermott “lost this big mansion in Ireland and he blamed me,” Mr. McGough said.

(Several attempts to reach Mr. McDermott through his friend James were unsuccessful. James eventually responded to an email query, apologizing for taking so long to reply, but follow-up emails went unreturned.)

In writing the memoir and telling his side of the story, Mr. McGough could be seen as evening the score, since Mr. McDermott’s erratic behavior so often derailed the duo’s career. “Isn’t this his ‘Mommie Dearest’ moment?,” Mr. Fleming said.

Mr. McGough downplayed any psychodrama behind the memoir. The motivation was simpler, he said: “I thought maybe there’s money in it, because I was broke.”

These days, Mr. McGough seems to have settled into a scrappier bohemian life in the Village. If he is no longer rich, he is still making art and grateful to be alive.

“I get out of bed, I stand up and I say, ‘You made it.’ And I immediately get in a good mood,” he said on a Thursday afternoon last fall.

He was perched with his Chihuahua, Queenie, on a French divan upholstered in green velvet. He wore pale-blue trousers with a pin stripe, which he had custom made in the wide-legged, high-waisted style of the 1920s. His thick, steel-gray hair was swept back Gatsby style and lacquered with what looked like pomade.

He still lives like a man out of the past, though he has moved up in period and incorporated semi-modern conveniences. “My cooker is from 1930, and the kitchen sink and the bathroom are 1930,” said Mr. McGough, who was charming, fun to talk to and utterly un-self-serious. “I like to think I’m a bohemian living here during the Depression.”

Perhaps out of habit, Mr. McGough seemed to want his partner’s opinion of his aesthetic choices, since Mr. McDermott had never visited his one-bedroom railroad apartment, which he began renting three years ago.

Pointing to a side table of his own creation, affixed with large graphic phalluses, Mr. McGough said, “He’d probably think the table is vulgar.”

Despite an ocean separating them and Mr. McDermott’s unresponsiveness at present, Mr. McGough still sees himself, and perhaps always will, as one half of McDermott & McGough. “We’re so bound together,” he said. “We are odd bookends that held up a life and a career. I can’t imagine my life without him in it.”