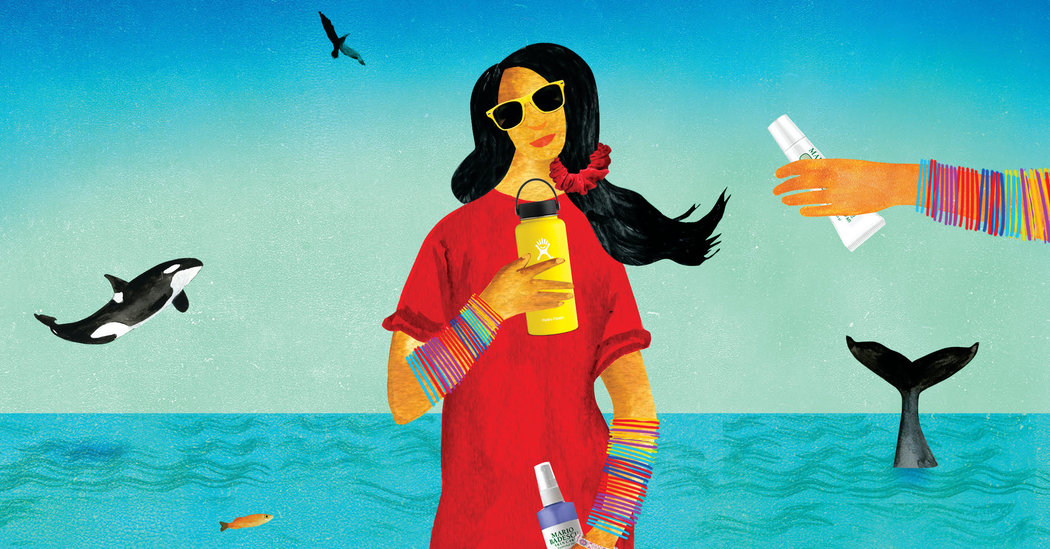 The 15-year-old YouTuber Emma Marie’s video “The ultimate VSCO sleepover,” posted in July, has been viewed more than 1.3 million times. In it, seven of Emma’s friends come over to spend the night on her backyard trampoline, which has been overlaid with tapestries, pillows, fuzzy blankets and warm string lights. The décor is not an original concept; it’s based on an Instagram photo, one that is emblematic of an extremely online visual identity.

“I know VSCO is just an app and you can’t actually be, like, a ‘VSCO person,’” Emma says in the video. “It just became a thing.” (She and her friends move the party inside shortly after setting up, because mosquitoes.)

Indeed, VSCO (pronounced “vis-co,” not “V-S-C-O”) is an app for editing and sharing images. But it’s definitely also “a thing.” “VSCO girls” like Emma and her crew are all over the internet now, spreading their easygoing and vaguely environmentalist aesthetic while also inspiring memes. (There are more than 422.4 million videos tagged #vscogirl on TikTok, most of them parodies.)

Kalhan Rosenblatt at NBC News describes the VSCO girl as “the latest teen iteration of ‘preppy’ style with a casual beach-inspired flair.” The VSCO girl not only looks bright and beach-ready — she also radiates with a desire to “save the turtles.” “A key component to the style is the use of products such as metal straws and Hydro Flasks,’” Ms. Rosenblatt writes, in addition to cutesy scrunchies and a slate of other brand-name items.

Which is to say, the VSCO-girl lifestyle is less about the app itself than accouterments like Crocs (decorated with charms); handmade Pura Vida bracelets; the aforementioned Hydro Flasks (covered in stickers); Fjällräven Kånken backpacks; Burt’s Bees and Carmex lip balms; Vans sneakers; and Mario Badescu facial spray. Often the companies are tagged in Instagram posts, blurring the line between appreciation and endorsement.

VSCO, for its part, mostly eschews influencers. When a user uploads a photo, it may include a hashtag and caption, but metrics that track influence — likes, follower counts and comments — are not displayed. (Instagram is now testing similar ideas, after some talks of acquiring VSCO in 2013.)

That VSCO hides these numbers appears to take the pressure off what users post. Consider the Olympic gymnast Simone Biles, whose Instagram feed is peppered with professional portraits, performance footage and #ads. Her VSCO feed tells a different story: There are short video clips of her French bulldog, Whataburger orders and other outtakes from her social life.

Because the app, which has 20 million weekly active users, doesn’t reward particular kinds of posting behavior, it won’t take credit for the spread of the VSCO-girl aesthetic. “It’s actually teenage girls starting it,” said Julie Inouye, a VSCO spokeswoman, in a phone interview. “They started to tie in these things that they own.”

But other companies are happy to lay claim to — and capitalize on — the phenomenon.

Pura Vida, which makes stackable bracelets ($ 12 to $ 28 apiece), is doubling down on the VSCO-girl market. To enter a recent Instagram giveaway, offered in collaboration with Hydro Flask, users had to follow both brands on Instagram, then leave a comment on the Pura Vida photo. Ms. Skaggs said that the photo (a Hydro Flask covered in save-the-turtle stickers) had six times as much engagement as the company’s average post: “We joke that we broke the internet with this one photo.” (A representative from Hydro Flask declined to comment.)

Not all of the brands involved are taking the same approach. A spokesperson from Mario Badescu, the skin care company featured in many of the memes, said the company has no plans to put more effort into reaching teen influencers. “I definitely didn’t conspire with all of the other brands to become some superpower VSCO brand,” the spokesperson said.

Terence Reilly, the chief marketing officer at Crocs, said in an email that the VSCO-girl trend has not changed the shoe company’s Gen-Z strategy, which already includes re-sharing images from young fans on social media. (He referred to those devotees collectively as #CrocNation.)

Pura Vida is running another giveaway this week — the prize includes scrunchies, a pair of Vans, Mario Badescu products and, of course, another stickered Hydro Flask, as well as some of the company’s own bracelets and stickers.

It is, essentially, a VSCO girl starter pack. But, Ms. Skaggs said, “we’re planning to not use the terminology of ‘VSCO girl.’”