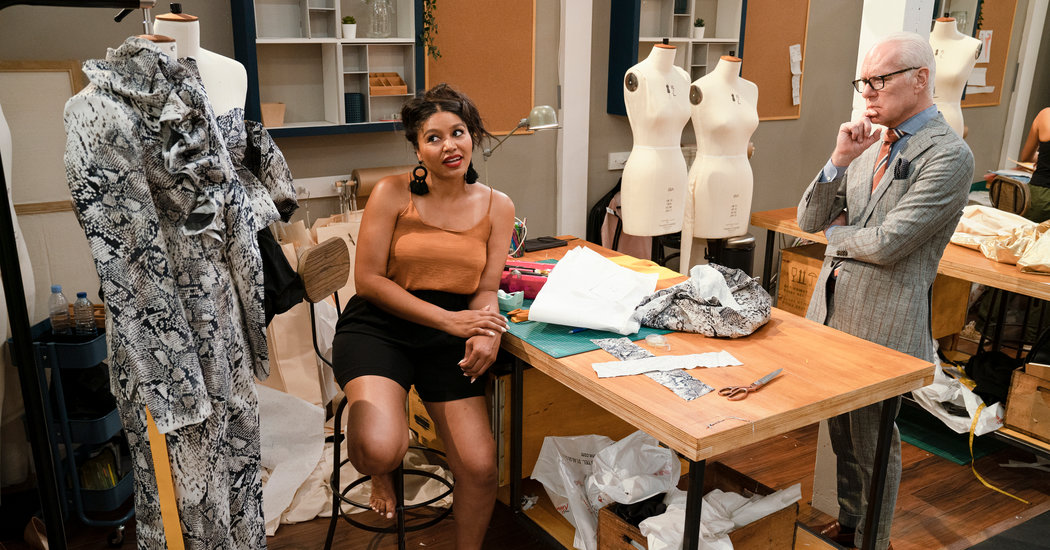 There is no live fashion to look at now. No shows; no red carpets; not really any street style. The cruise collections that normally take place in far-flung destinations during May and June have been canceled.

The Met Gala and the Council of Fashion Designers of America awards have been postponed (assuming they happen at all); the Cannes Film Festival is off. Forays to the supermarket or the park yield only sightings of leggings and sweatpants and the occasional jeans. Window shopping is over.

But we still have TV.

And on TV (or the various screens that pass as TV today), there is a new slate of reality fashion programs that are currently streaming or about to stream.

They include the rebooted “Project Runway” with Karlie Kloss and Christian Siriano, which recently ended its network season on Bravo but is available on bravotv.com; “Next in Fashion,” the Netflix/Net-a-Porter production that dropped last month, hosted by Alexa Chung and Tan France; and “Making the Cut,” the Amazon take on the genre, starring the godparents of them all, Tim Gunn and Heidi Klum, which debuts on March 27.

At first, when this plethora of fashion programming was announced back in the pre-virus day, it struck me as surprising. Why this sudden interest in fashion TV? “Project Runway,” after all, had been around since 2004 on various channels, and its heyday had largely passed. “Fashion Star,” on NBC, lasted only two seasons.

Then I began to think the mass of shows were a testament to the universal nature of fashion: as accessible and popular a subject as food and shelter (not coincidentally the other two primary topics of reality competitions).

Now, I am especially glad to have them.

They are, for the moment, as close to the real thing as any of us can get. And to spend hours watching them, as I have done recently, is both absorbing and weirdly nostalgic.

That is not just because they feature a lot of hugging and air-kissing and crowded rooms at a time when we are all isolated and working remotely — even design teams — or because the characters are so charming or infuriating. It’s also because how the industry will come out of this particular experience is unclear.

What will happen to the young designers, like those featured on the shows, who are just starting out in business? Can they survive? Will street wear and athleisure, up-and-coming sectors every designer needed to master at the time of filming, continue to be in demand after we’ve all been working at home and wearing nothing else for eight weeks? The future is a foggy miasma.

But for a snapshot of the fashion world that was — its aspirations, appeal and pressures — they are actually pretty good.

As the next generation of fashion reality TV, they also reflect an evolution in the industry. It’s not that they mess with the formula entirely. They all have the usual flamboyant man/fashion plate woman pair of hosts; a panel of three to five expert judges; one dressmaking challenge per show; heart-clenching stories of children left at home and parents who went without so would-be designers could follow their dream.

Even so, they have partly redesigned it.

They are a lot more millennial; the “Project Runway” hosts are Karlie Kloss (27) and Christian Siriano (24), and “Next in Fashion” features Alexa Chung and Tan France (both 36). They are notably more diverse, both in contestants and models, than previous fashion shows.

They are more global, with designers from Asia, Europe and across the United States. They are less about creating bitchy characters that play into hackneyed fashion stereotypes and more about a kind of group recognition that success in fashion is hard and requires team players. (Not that they don’t still have the characters, like Angelo on “Next in Fashion,” who likes to dress entirely in leopard print, and Esther of “Making the Cut,” a black-clad wraith who even swims with her stacks of gold bangles on.) And they all include a core element of e-commerce.

“Project Runway” allows viewers to “shop the looks” through bravotv.com; a full collection from the winner of “Next in Fashion” is for sale on Net-a-Porter; and after each episode of “Making the Cut,” an item by the winner will be for sale on Amazon Fashion.

That development is an expression of the once ruling see now/buy now ethos. (Remember that? How quaint it seems.) It is perhaps an attempt, as well, to address the conundrum “Project Runway” always faced: Why, in 17 seasons, did only Mr. Siriano emerge with any kind of meaningful business?

Beyond that, each show pulls back the curtain on a different dimension of the fashion world. “Project Runway,” despite its younger skew with Ms. Kloss and Mr. Siriano, as well as a judging panel that includes Elaine Welteroth, once of Teen Vogue, and Brandon Maxwell, is still is the most traditional reality TV production.

There is Ms. Kloss, often in full-on evening gowns; some I-learned-it-at-my kitchen-sink contestants; and a story line that focuses more on the fairy tale of winning after adversity that often seems sewn into the fashion myth than on the workaday aspects of design.

“Making the Cut” has the biggest pocketbook for a winner ($ 1 million) and an emphasis on the evolution of the designer-as-brand that mimics what has taken place in fashion over the last decade. As Ms. Klum lectures in an early episode, “the designer behind the brand is just as important as the clothes that walk the runway.”

To that end, each participant comes to the show at a somewhat more advanced stage of their career. One is a Parsons professor; a few have their own stores; all have created collections for sale. And in each episode they must create one “runway look” and one “accessible look” (the accessible look is what will be sold on Amazon, in sizes XXS to XXL).

Judges include Naomi Campbell, Joseph Altuzarra and Chiara Ferragni (the Italian influencer also known as the Blonde Salad). Once they have given their verdict, often while dressed in paillettes and sequins, the contestants get the chance to argue their own case.

“Listen, I want to continue here, I can’t see myself doing anything else,” says Renat from Israel. (Attention, art schools: Please offer a course in media training.)

There is a fair amount of angst over the balance between art and commerce — one contestant, Sander, from Belgium, who clearly has visions of Rei Kawakubo dancing in his head, is anguished about the demands for “wearability” — which is also a constant existential debate in designer conversations. Or at least was.

If “Making the Cut” comes down on the side of business, though, “Next in Fashion” is a celebration of design. Of the three, it seems the least contrived and the most like being inside a design studio. Ms. Chung wears sneakers and pants most of the time, instead of getting cocktail-dressed up, and neither she nor Mr. France take themselves too seriously.

The winner gets $ 250,000 and Net-a-Porter will sell their clothes; judges, including the stylist Elizabeth Stewart (Cate Blanchett, Viola Davis), and rotating designers (Christopher Kane, Kerby Jean-Raymond of Pyer Moss, Tommy Hilfiger) bestow compliments that most often involve statements like, “I can see Taylor Swift in that” or “I could see Michelle Obama wearing that.” Once upon a time that was the highest praise.

The designers themselves are more established than those in the other two shows (Angel Chen, from China, was included in the Business of Fashion 500, and Forbes Asia 30 under 30; Ashton Michael, from Los Angeles, has dressed Beyoncé and Post Malone). Their products are more polished, less like art school costume than aspirational clothes.

The topics they discuss have been the defining topics of fashion for the last 10 years: stress, self-expression and the challenge of those who can sew versus those who are creative directors. And the ultimate winner (no spoilers here) genuinely does seem to be what is next in fashion. Or at least what would have been, had the trajectory we were on remained the same.

Whether that is still true is now in question. Perhaps more than anything, these shows will soon seem like glossy relics of the world that was, before store closures and bankruptcy became the most pressing topics of fashion. In which case, whatever you think of the form or the characters involved, they will have an anthropological value that should not be underestimated.

“No one was more shocked by the success of the show than I was,” Mr. Gunn said in a phone interview, talking about the original “Project Runway.”

“I never once dreamed there would be a Season 2. I thought Season 1 would be all about the sexual escapades of the designers, but we realized viewers enjoyed being voyeurs on the creative process.”

In a world where everything has changed, that, at least, remains the same.