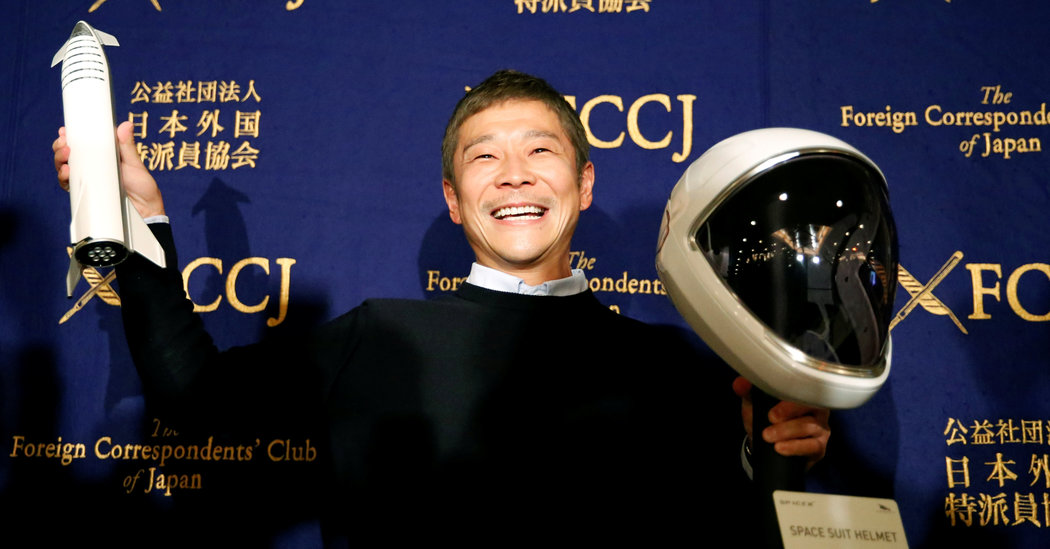 Until recently, the most famous retail billionaire to hail from Japan was Tadashi Yanai, the low-profile founder and architect of the casual-wear empire Uniqlo. This week, however, a new contender has emerged for that crown: Yusaku Maezawa, a fashion billionaire who recently posted an online advertisement for a wing woman to accompany him on the first SpaceX flight around the moon — and through life.

Mr. Maezawa, 44, is the renegade founder of Zozotown, Japan’s largest fashion retailer. He made headlines around the world in 2018 when it was revealed that he would be the first private passenger to fly around the moon by SpaceX, the company owned by Elon Musk. With a penchant for flashy purchases, Mr. Maezawa, a college dropout, has long been considered a master self-promoter. This makes him something of an anomaly in Japan, which has one of the world’s most conservative corporate cultures.

How did he make his money?

Mr. Maezawa has a net worth of $ 3.6 billion, according to the Bloomberg Billionaires Index. His fortune is largely thanks to Zozotown, an online fashion marketplace for cool Japanese and Western brands that he started in 2004. Today, the site features about 7,300 brands with more than 730,000 items and is the largest fashion mall in Japan; its parent company, Zozo Inc., is listed on the Tokyo Stock Exchange.

In September, Mr. Maezawa resigned from the management team of Zozo after selling a 30 percent stake in the company to Yahoo Japan, which is owned by SoftBank, for $ 2.3 billion. In November, he posted a video on YouTube that filmed him visiting a Tokyo bank branch to update his bank book after the deal, which showed a new balance of around 100 billion yuan ($ 900 million).

“It’s nerve-racking!” Mr. Maezawa said as he entered the bank.

So now that he has more time (and money) on his hands, he has started a campaign on the internet to find a girlfriend who will go to space with him. Correct?

Correct. In a post on AbemaTV, a Japanese video-streaming website that will run a “matchmaking documentary” called “Full Moon Lovers” chronicling on his latest endeavor, Mr. Maezawa announced he was looking for love.

“I’m sure I’ve been able to acquire my share of money, social status, and fame along the way,” he wrote on the website. “But now I’m restarting my life. I’m 44 now. As feelings of loneliness and emptiness slowly begin to surge upon me, there’s one thing that I think about: Continuing to love one woman. I want to find a ‘life partner.’ With that future partner of mine, I want to shout our love and world peace from outer space.”

The deadline for applications is Jan. 17. A final decision will be made by the end of March. Only committed applicants need apply. The trip on Mr. Musk’s Big Falcon Rocket is set to take place in 2023. Women hoping to join Mr. Maezawa must be over 20, have a “bright and positive” personality and (unsurprisingly) an interest in space travel.

As if 2020 hasn’t been weird enough already.

Has Mr. Maezawa been promoting his campaign anywhere else?

Yes. Like Mr. Musk, Mr. Maezawa is a big fan of Twitter, and has seven million followers. In fact, last year he ousted a chicken nugget-seeking teenager in the United States to become tweeter of the most retweeted tweet of all time. He was offering a giveaway of 1 billion yen (over $ 9 million), so it is not overly surprising it went viral.

His tweet in English about finding a new girlfriend played it relatively cool by his standards:

The tweet in Japanese was more to the point:

“I have decided to make an appearance on AbemaTV’s matchmaking show. I’m ashamed, but I’m also at the end of my rope so I’d seriously like to find my life partner!”

Has Mr. Maezawa ever had a girlfriend before?

Yes. Mr. Maezawa, who is divorced and has three children, has had a string of celebrity girlfriends. He separated from his most recent partner, Ayame Goriki, a model and actor, because he wanted her to go to space with him but “they had different aspirations.”

So now he’s trying online dating, albeit with a slightly different approach from everybody else.

By the looks of his CV, he has always liked to do things differently.

That would be a fair assumption. In the late 1990s, Mr. Maezawa skipped college to be a drummer for a hard-core punk rock band. His stage name was You X Suck. At the same time, he started a mail-order catalog business selling rare CDs and records called Start Today. The firm went online in 2000 and began offering niche fashion apparel in addition to music before opening the shopping website Zozotown in 2004.

By the time he was in his mid-30s, Mr. Maezawa was a billionaire.

Has his risk-taking always paid off?

Not always. The Zozosuit, a skintight black bodysuit covered in white tracking dots, was supposed to be Zozo Inc.’s way of revolutionizing the clothing business. The idea was to sell custom-fit clothes via a line called Zozo using measurements from the dots. But although three million suits were sold, critics said the measuring software was not accurate, and the experiment failed, hitting the wider business hard.

Last April, the company also announced the closure of its European and United States operations, writing off at least 2.7 billion yuan ($ 25 million). Brands dumping the site over its discounting practices has also taken a toll.

Did this contribute to his decision to sell a stake to SoftBank?

Possibly. Last September, just after his Space X trip was announced, Mr. Maezawa said he would sell a stake in Zozo and step down as chief executive to pursue a “new path” and train for exploring the universe. Press coverage of all his exploits will likely raise the profile of Zozotown, which is a household name in Japan but remains relatively unknown elsewhere.

Other than shooting for the stars (and finding a girlfriend), does Mr. Maezawa have any other hobbies?

A tabloid fixture in Japan, Mr. Maezawa has always been something of a provocateur. In a recent essay, he laid out his vision of seeing a world devoid of money, which he believes will alter people’s attitudes toward work and relationships for the better. Still, he loves to shop, be it on a new interior for his private jet designed by the luxury label Hermès or a vast collection of sports cars. Rumor has it he is also eyeing a baseball team. An avid modern art collector (he bought a Basquiat painting at Sotheby’s for $ 110.5 million in 2017), he has also said he plans to build an art museum in Chiba, his hometown.

Perhaps he will fill it with works from his upcoming art project #dearMoon, created by the artist troupe he takes with him on his moon voyage.

Wait a minute. It won’t just be him and his girlfriend?

Nope. There won’t be much alone time for the lovebirds on the weeklong trip. Mr. Maezawa has booked out the whole rocket for himself and his partner — plus a gaggle of painters, musicians, dancers, photographers, film directors, fashion designers and architects who can create new artistic “masterpieces.” If they take off at all, that is.

The launch relies on a rocket yet to be built, and Mr. Musk himself has said it is not “100 percent certain we can bring this to flight.” The whole thing gives new meaning to the term “moon shot.”