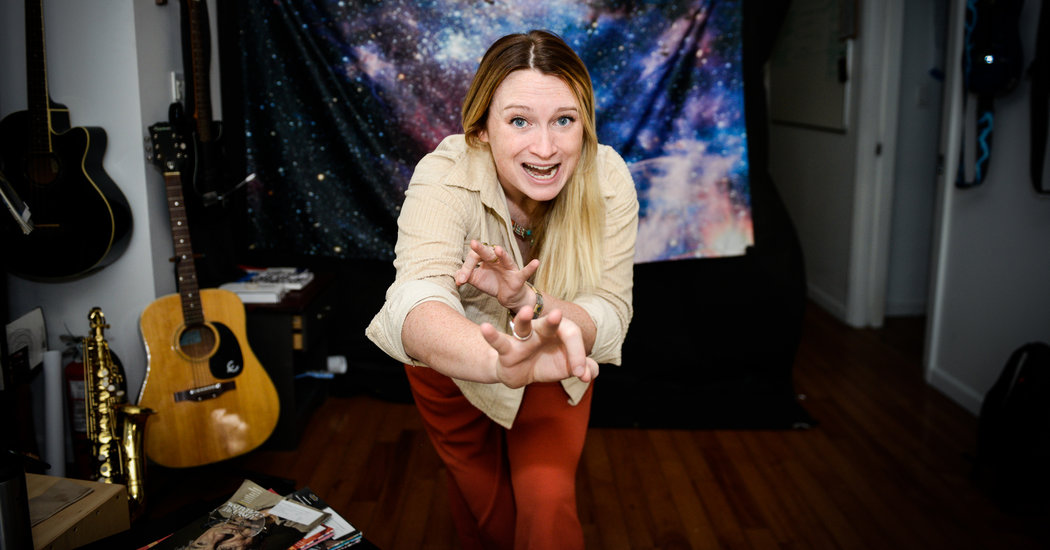 In the early 1980s, beatboxers backed up rappers when drum machines were unaffordable. Today, the art form remains largely underground and misunderstood. Some people dismiss it as a gimmick.

Kaila Mullady wants to change all that.

“We are shaking a venue with sub-bass just like any huge D.J.,” she said of beatboxing. “But it’s coming from our mouths.”

The first and only two-time winner of the Beatbox Battle World Championship, Ms. Mullady, 27, is known for incorporating singing, poetry and other theatrics into her performances. She was also the first woman to defeat a man in a national competition.

A Broadway director took notice, and she is now performing in Lin-Manuel Miranda’s “Freestyle Love Supreme.”

Ms. Mullady, a native of Long Island, is co-hosting and co-producing the American Beatbox Championships, a national battle, in Brooklyn Nov. 8 through 10. The event is celebrating its 10th anniversary.

This is an edited and condensed version of a recent conversation with her.

How did you get started?

KAILA MULLADY I’ve been beatboxing since I can remember. I would watch videos on YouTube. In fifth grade, this kid told me: “You’re beatboxing. That’s what you’re doing.” It became the party trick. I would do it in the back of the bus or on the lunch table and people would rap to it.

When did you realize you wanted to pursue it as a career?

MULLADY After high school, I met this beatboxer named JFlo at a party. My friends were trying to get me to beatbox and I said, “I’m not your toy.”

Then my one friend got it out of me. JFlo came out of the backyard and everyone parted like the Red Sea. He said: “Was that you? Do it again.” So I beatboxed for him and he said, “O.K., you need to hang out with me.”

He introduced me to the New York City beatboxing community, where I met my mentor, Kid Lucky.

At that time, I was doing a lot more improv and theater in the city, but I broke my back in 2012. There was no way for me to do improv unless I became a robot onstage or a cactus. If your back is broken, you can still beatbox.

I started coming into the city three or four days a week, street performing with Kid, doing open mic nights. At that point, I just really fell in love with it and by the time I could go back to work, I was like, “Nah, I’m going to give this a shot.”

How did Kid Lucky work with you?

The first time I went to meet up with Kid, I had dropped out of college. The only classes I went to were acting, philosophy and social studies. Then I just stopped going. I was a little bit lost at the time.

He taught me about beat rhyming, which is when you sing or rap — tell a story — while you beatbox. He would put me on the street corner by myself and leave me and say, “If I don’t hear you using words, you’re going to be in trouble.” I started realizing if anyone stops on the street and they give you a dollar, that’s truly the best compliment.

What does it take to become a professional beatboxer?

A lot of dedication and creativity. You constantly have to prove yourself. Beatboxing is still so new that I — and my friends — very much are chopping down doors to show that it is a great tool for education, a great tool for speech therapy, that it deserves to be on Broadway.

You’re one of the few professional female beatboxers. What’s that like?

When I first started, the sexism online, it’s still bad now, but it was really bad then. They would be telling you what you should be doing with your mouth instead. Even my style of beat rhyming, when I first started that, everyone told me that’s not really beatboxing.

But now, the trend around the world is everyone is making full songs and using their voice. I think because I’m a woman, I won’t get credit for that contribution in the battle scene.

Are there other female beatboxers you admire?

How is the beatboxing scene in New York different from when you first started performing almost a decade ago? How is it the same?

It’s way bigger now. There are two new waves of generations of beatboxers who are now in New York killing it. There’s this energy and this respect. I would say that right now, New York City has the most amount of female beatboxers. When I first started, it was literally four of us, and I was the only one battling.

It’s the same because we have actual mentors here; people since the 1980s that started in New York City. Beatboxers in their 40s are teaching us what to do. Their whole thing is, “Be original.” In other parts of the world, it became more about, “How crazy of a sound can you do?” Here it was always, “What are you trying to say with it?”

Can you earn enough money doing this?

I think it speaks for itself that I pay for a New York City apartment just beatboxing, have a savings account just beatboxing. I’m able to travel the world. I can take vacations. I can help my friends out if they need.

I think anything that you’re passionate about, you can turn into a business, but it takes creativity, perseverance, because it won’t start off like that. I started street performing, making maybe $ 25. But it got me one gig and that gig, somebody saw me, and it got me another two gigs. I’ve been doing this for eight years now.

What are your favorite places to perform in New York?

Astor Place, by the Cube, is my comfort zone. When Kid and me would be street performing, that’s where we would go. Every time I walk in that place it reminds me of how far I’ve come.